Bread Machine Loaf does not Dome

When baking a standard loaf in my Bread Machine, the top of the loaf seemed to collapse back in at some point, and instead of coming out with a nice rounded top, it looks like this: 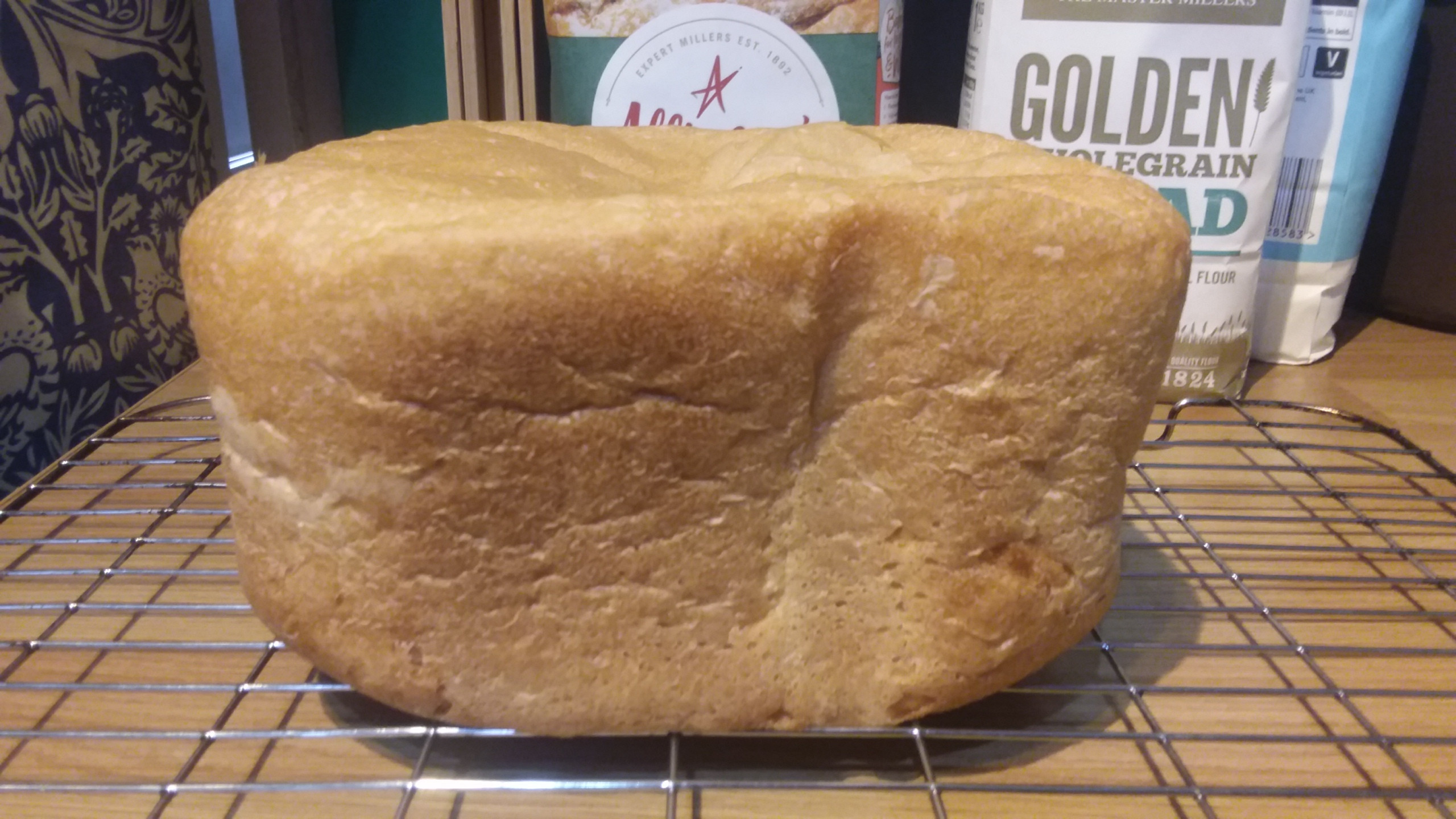 The standard setting is a four hour bake, the machine is windowless so I can't tell if a particular stage is at fault. The bread is still edible and tastes fine.

I was about to ask in a comment as to where in the world you were, as there are a few factors that can play into this. However I spied packages in the background and with a bit of sleuthing deduced that you bought Allinsons products, probably from Tesco and were hence likely in the UK, so high altitude isn't likely to be one of your problems.

I bake pretty much all my bread in a bread machine, mostly because I was living somewhere where bread was terrible in taste and texture, but have continued since moving away from there.

I find that bread machine recipes tend to be a little off how the recipes work. This might be something as simple as different flour brands used or the fact that tests are done in controlled conditions in labs with stable temperature and humidity.

Too much yeast will cause the bread to rise too fast and become too open, leading to collapse. Your recipe looks like the right amount.

I have come across a problem, in countries where the flour is not bleached, that you need to add some "bread improver", which is just some vitamin C and a bit of soy lecithin. I surmise the following is happening, but have no certainty on this: Without the improver the dough tends to rise slowly once the yeast has used up the added/free sugars in the flour - so the second rise fails to work well, leaving the heating from the cooking expanding the few bubbles remaining after knock-down too much, so the bread then collapses. If you are buying "bread machine" specific yeast it may have added improver already (if the UK needs it). You can tell this is the case as it will look like a mix of flour-like substance (improver) with small cylindrical granules (yeast). Plain yeast is a just the granules.

I find that bread machines (at least my one) don't knock down the dough properly or have a long second rise, which results in the upper part of the loaf being more open than I would like. I think this is a function of the timing of the rises, with the second rise being too long (or the element heating too slowly), so the loaves tend to rise, then collapse as there are too many bubbles in the dough.

It's going to be very difficult to answer this exactly without more information, you need to open the lid at different times in the process and see when it collapses as that will tell you much more. If you cannot try that then here's some general advice. First would be not to add lemon juice.

From my own experience with bread machines I've found that they rarely get it right without experimentation. By far the most common problem is over-proofing, which can cause exactly the kind of problem you are having, and the most successful way to control this is to reduce the yeast in the recipe so there's a bit less activity. Try adding 1/2 tsp instead of 3/4, or even less for a batch and see if that helps.

8
What additions can I make to my basic white bread recipe to increase its fiber content?
2
Why is my bread dough sticky?
8
Bread from the machine always too soft, can't be buttered
4
What ingredients can I add to no-knead bread to extend its life?
2
How to avoid collapsing bread?
0
Does bread flour (vs AP flour) make a big difference in the density of the dough?
7
Am I calculating bread dough hydration correctly?
0
How to avoid shrinking bread loaf after baking?
3
How does no-knead bread not overproof?