Can you create brown butter directly from heavy cream?

The other day I made cookies with homemade brown butter.

I first churned the butter from heavy cream, separating the butterfat from buttermilk. Then I took the remaining butter and melted it in a pan then browned the milk solids to make brown butter. Then I cool it in a glass container and let reform as a solid.

I am wondering if you could directly make brown butter by skipping the churning process for the heavy cream. Is there a way to heat heavy cream such that the water / buttermilk / etc. evaporates and leaves melted butterfat and milk solids?

I would think that the water would evaporate and leave only the butterfat + milk solids but I am not sure.

I had a pint of heavy cream so I went ahead and tried it to see what happens. I left in a small saucepan over medium / medium-low heat for a while with minor agitation (stirring every few minutes). It looked about the same for the first 45 minutes. Then I could actually start to see what I assume is the butterfat. However I also saw a large amount of milk solids (I assume), much larger than typical churned butter. 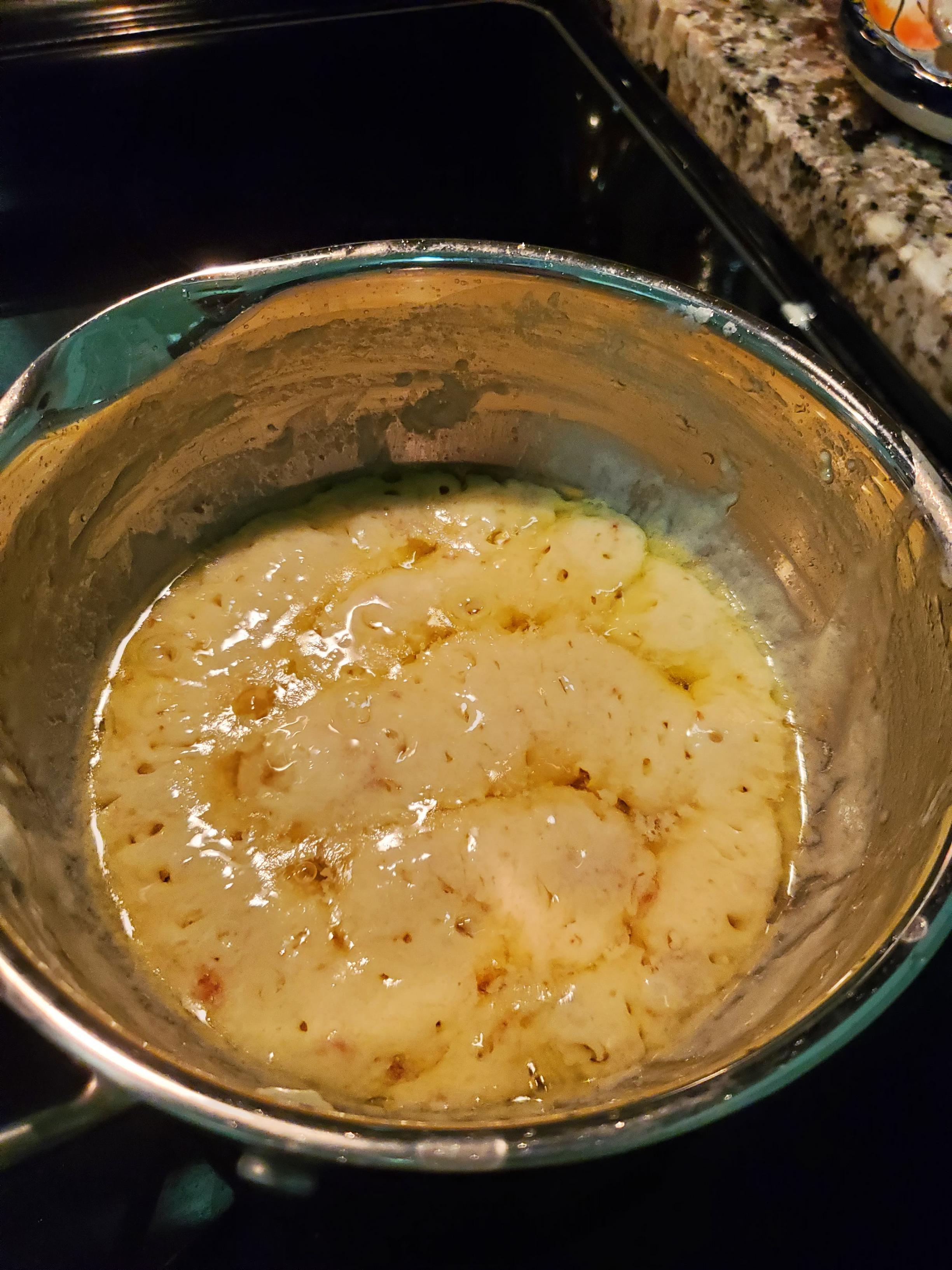 Then I waited a little longer and it seems they separated further: 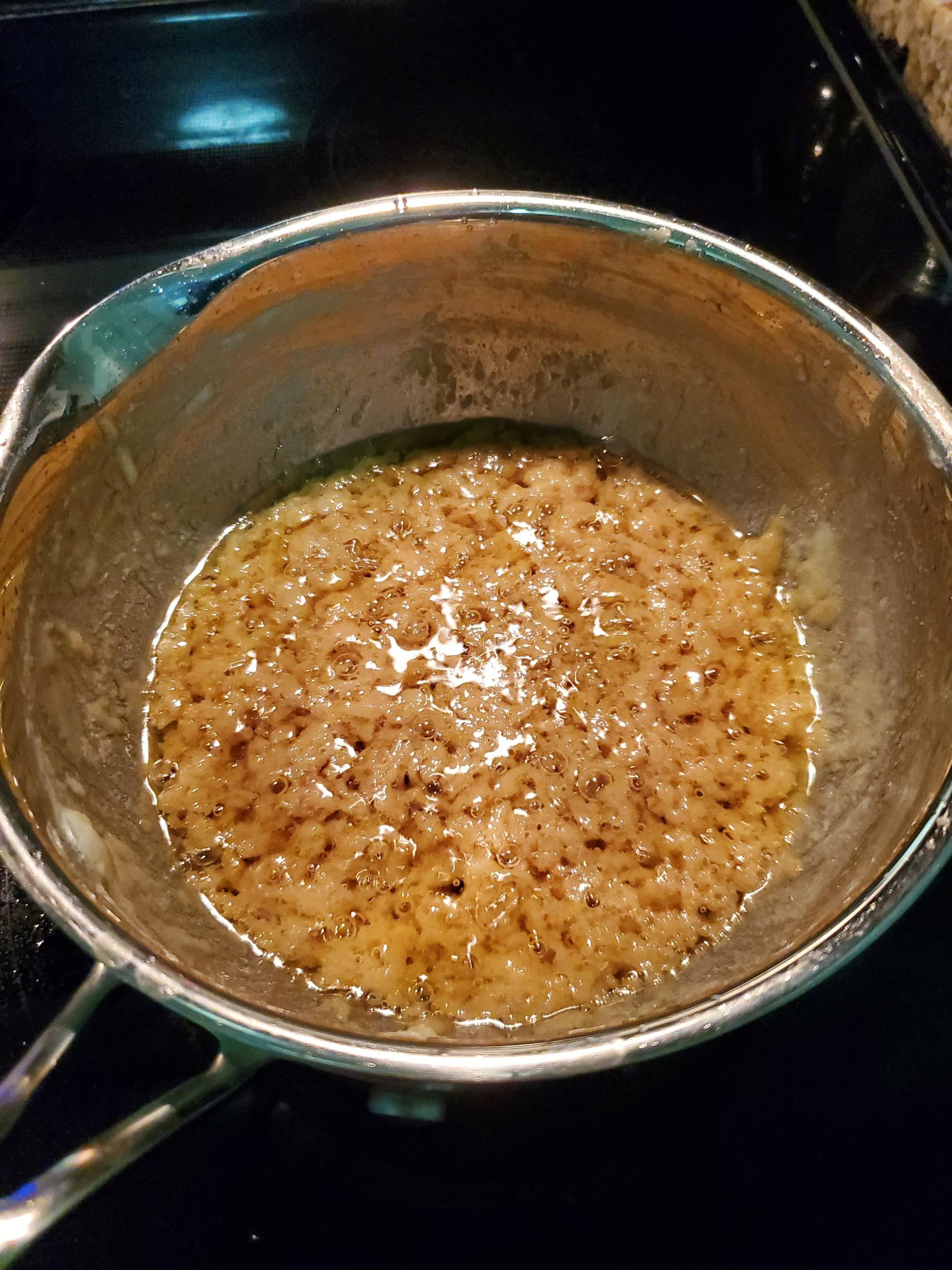 A little longer and it smelled toasty like the usual smell from brown butter when I make it. I took it off the heat because it also ruined my pan pretty nicely. I poured it in a glass container and here's what it looks like after separating: 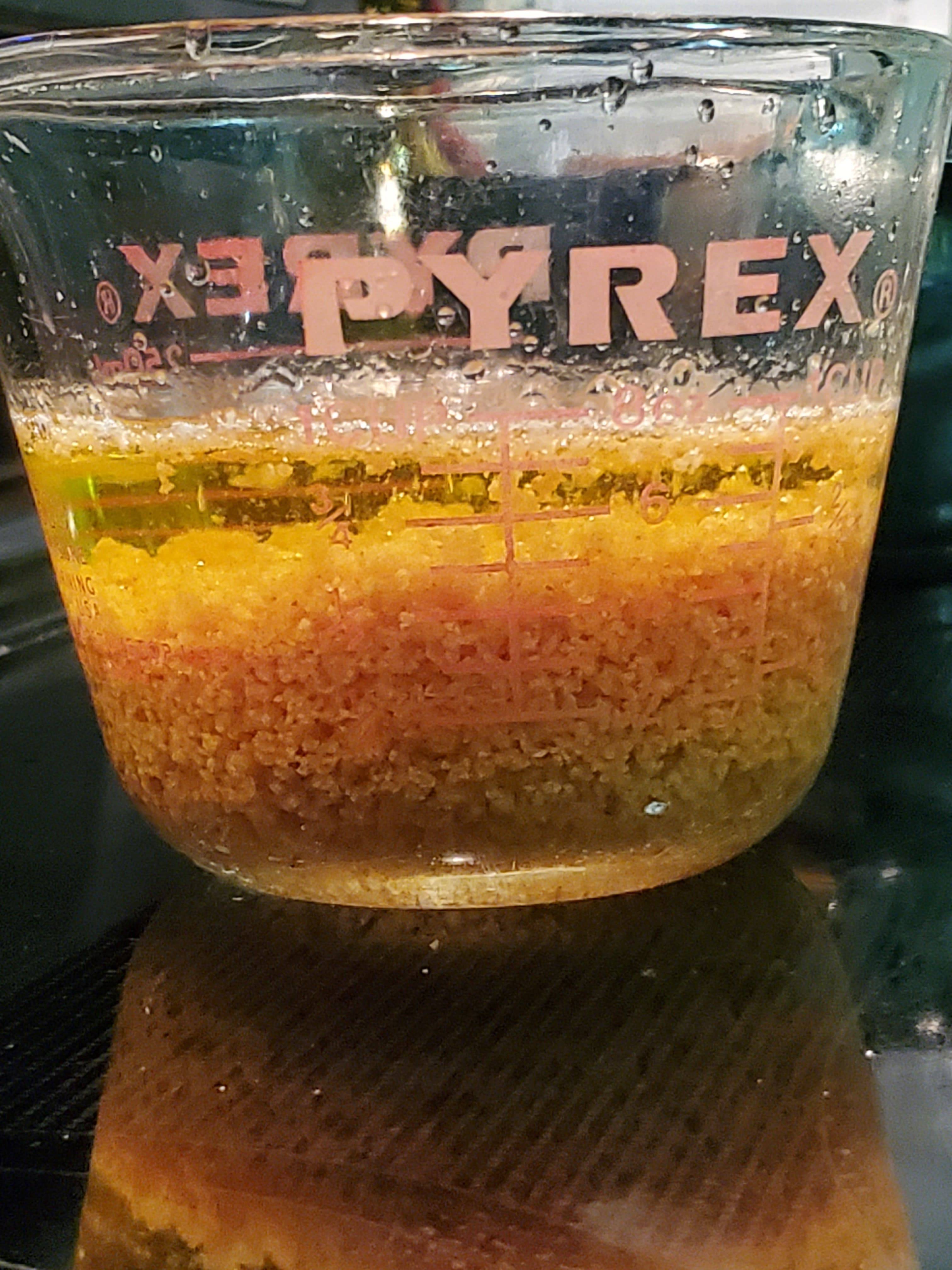 So my follow-up questions would be: Is this brown butter? Are the solids just milk solids or are they something else? Is the oil actually butterfat? Is this safe to incorporate into cookies as butter?

I enjoy the taste that toasted milk solids add to cookies but this is so much more milk solid than I was expecting (if it is milk solids).

Another update now that it's solidified. It looks and smells just like how my normal brown butter smells except it has way more milk solids (if that's what they are). I would estimate about 1/2 cup of clarified butter + slightly less than a half cup of toasted solids. 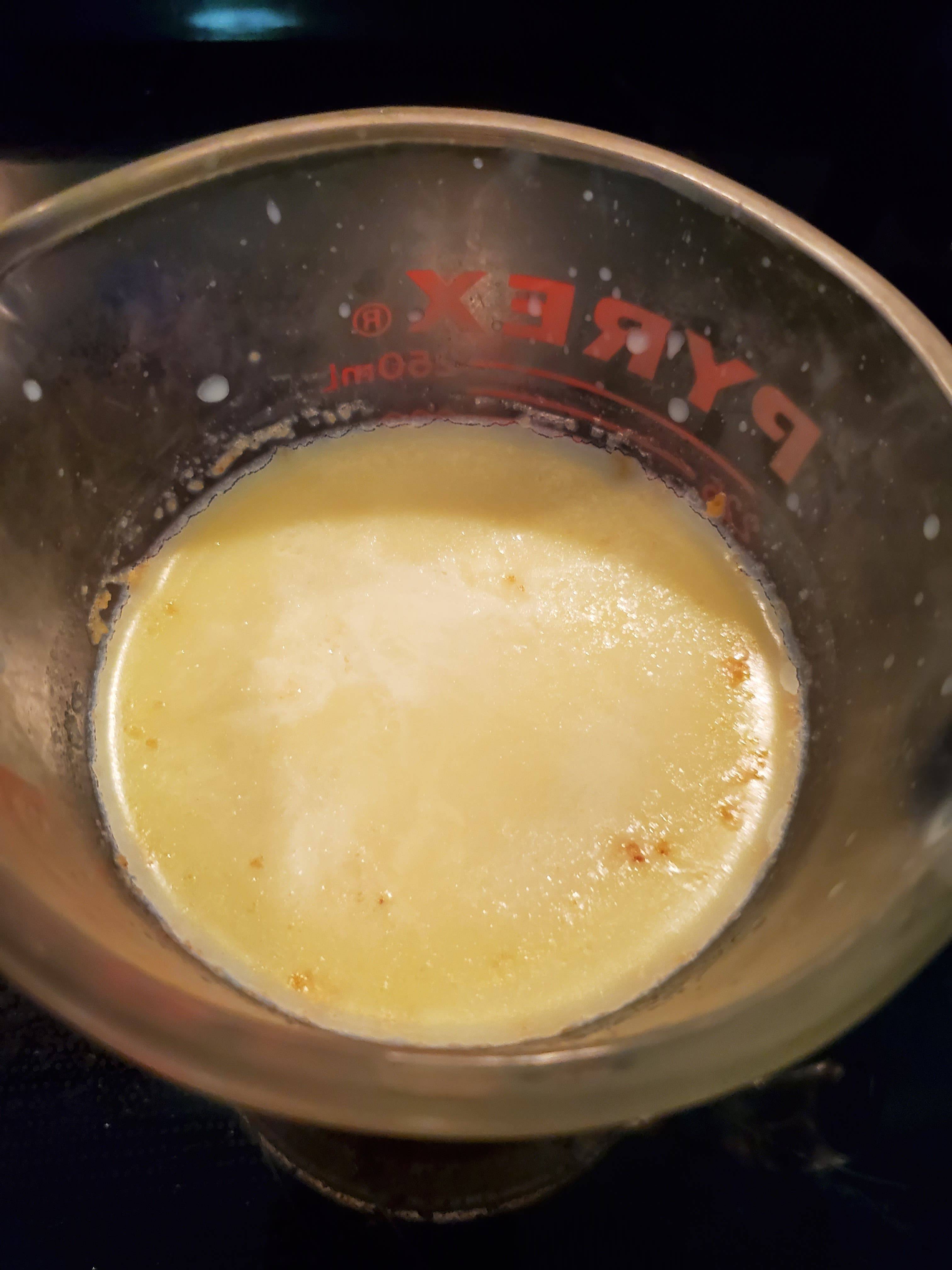 It doesn't look like 1/2 cup clarified butter but keep in mind that the butter also settled into the gaps between the solids while it was still liquid. 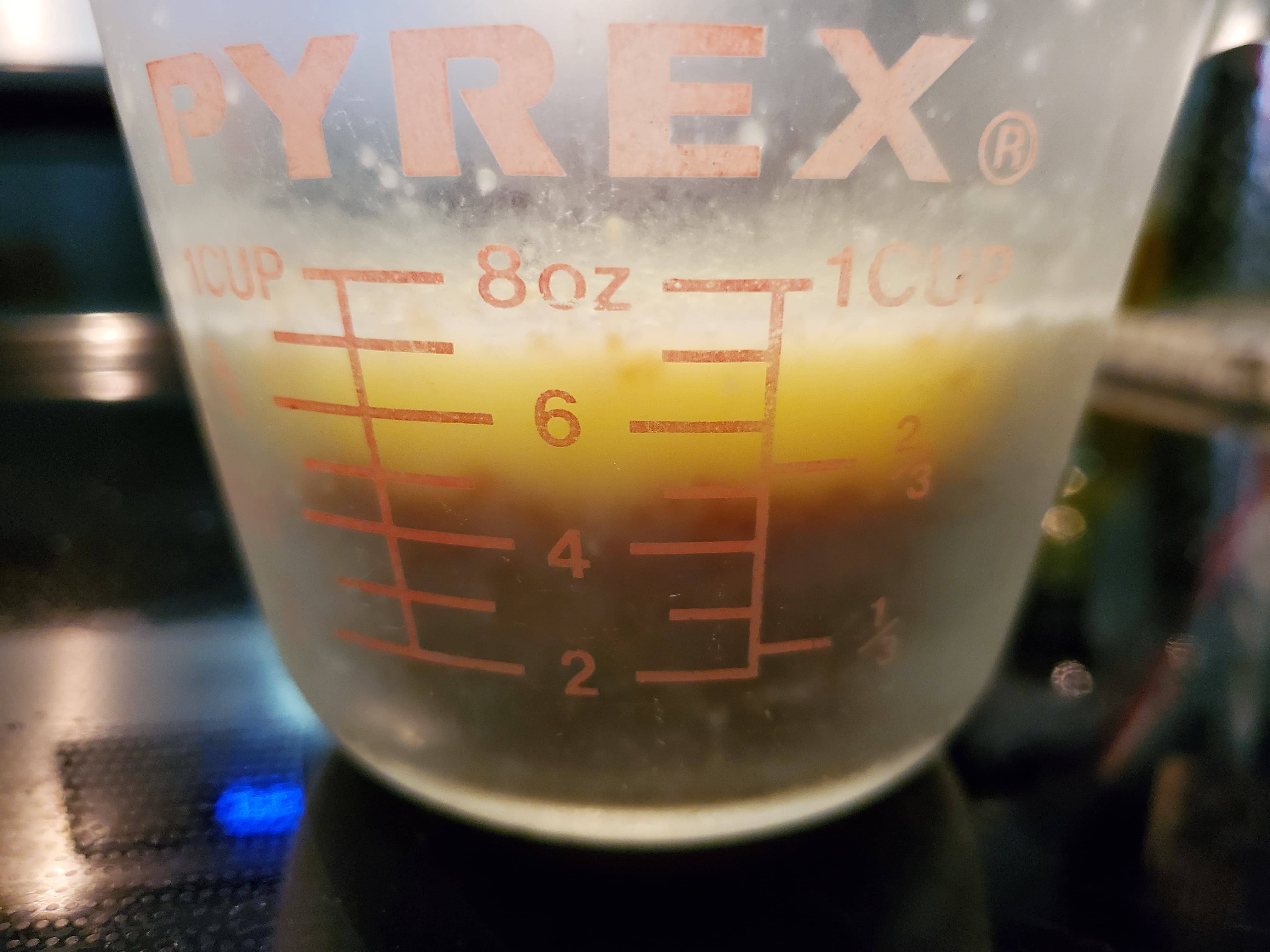 It smells delicious. I'm tempted to soften it and mix it into a batch of cookies but I'm also not sure if the solids will be over powering in the taste.

Yes, this is a brown butter. You can use it in pretty much all applications which call for standard-made brown butter.

In the traditional process, first almost all of the water is removed from the cream, along with a large part of the nonfat milk solids. This gives you butter, in which the butterfat is emulsified with a small amount of water, and the remaining milk solids are dispersed. When you heat it, the water evaporates, and the solids undergo browning processes (caramelization, probably some Maillard for the proteins).

In your case, you are simply skipping the mechanical removal of the water. Instead, you are evaporating all water by heat. No milk solids are removed - from my point of view, this is an advantage, as you now have more stuff that goes tasty while browning.

You can certainly use this in cookies. As for the question of the taste being "overpowering", this is up to your subjective taste. If you don't like it, you can switch back to more standard browned butter, or mix this one with normal butter, ghee, or some other solid fat.

11
Can clarified butter be used for beurre noir?
9
Did I make butter, or something else?
5
Getting butter from yogurt
2
Why might I have trouble making butter from Crème Fraîche?
3
Making ice cream and fats don't dissolve in base
6
What is the foam that comes out when making clarified butter?
2
When whipping cream, does its state continually cycle through various states? Is there a dead end at whipped butter? Or does something else happen?
4
What to do with leftover cream after churning butter?
3
Making clarified butter by removing water but not the milk solids?
0
Can one use butter to replace cream or milk in drinks?