Yellow color from brand new Pre-Seasoned Lodge Cast Iron griddle (before seasoning or even heating). Is this normal?

I received my Lodge 10.5 inch pre-seasoned cast iron griddle today (and I'm very new to the world of Cast Iron). I washed it with water and soap and used the soft side of the sponge and on second wash I used the rough side. While waiting for the pan to dry (before I was going to start seasoning), I tried dabbing the sides with a paper towel to remove some of the moisture and I noticed a yellow stain of sorts coming off of the pan. I washed the pan again a couple of times but there still seems to be a yellow stain. Is this normal? I haven't seasoned the pan with oil or anything.

Also, I know cast iron pans aren't perfectly smooth like a nonstick Teflon pan but there's a very small grey bump on my pan. Is this acceptable?

Edit: The pan upon drying looks rusty and it appears yellow-orange like on kitchen towels if I try it rub it.

Edit 2: Thank you everyone for your comments, feedback and advice. I'm a complete newbie and I've been reading and watching as much info about cast iron usage and I, really, appreciate them. I don't own a oven so I've been using a stovetop to season the pan. After about 3 rounds of seasoning, I attempted a fried egg test with cooking canola oil(I think my pan was too hot/medium flame) but failed twice. Today (24 hours later), I attempted the fried egg test using a teaspoon of butter (preheated the pan and used a low flame) and it came off quite cleanly except for when I tried to flip it over and a bit of it got stuck. (check images 4 and 5). However, I've noticed a dark brown color tone around the pan (image 6) except at the periphery. I don't know if this is because I've seasoned it incorrectly. 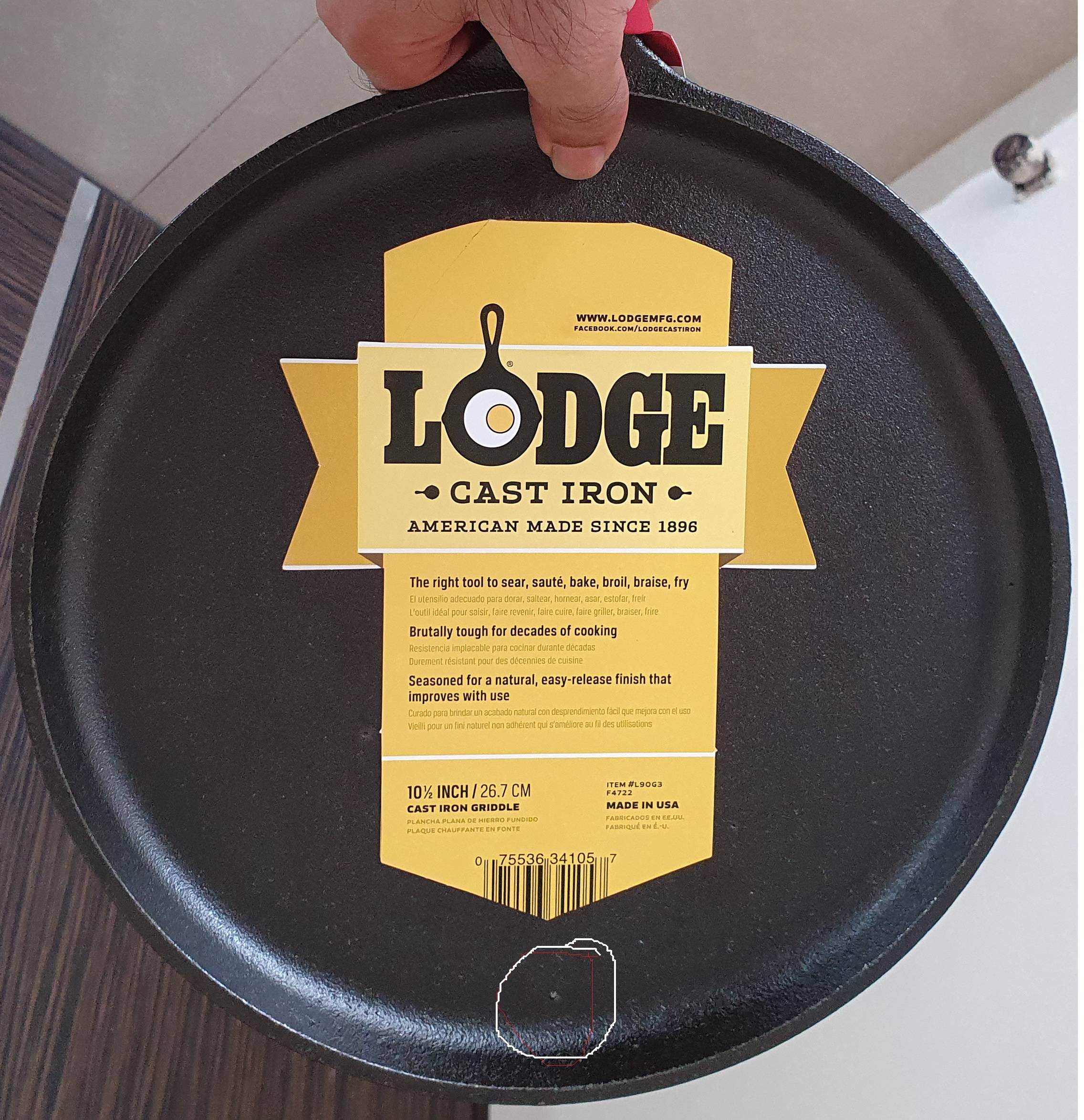 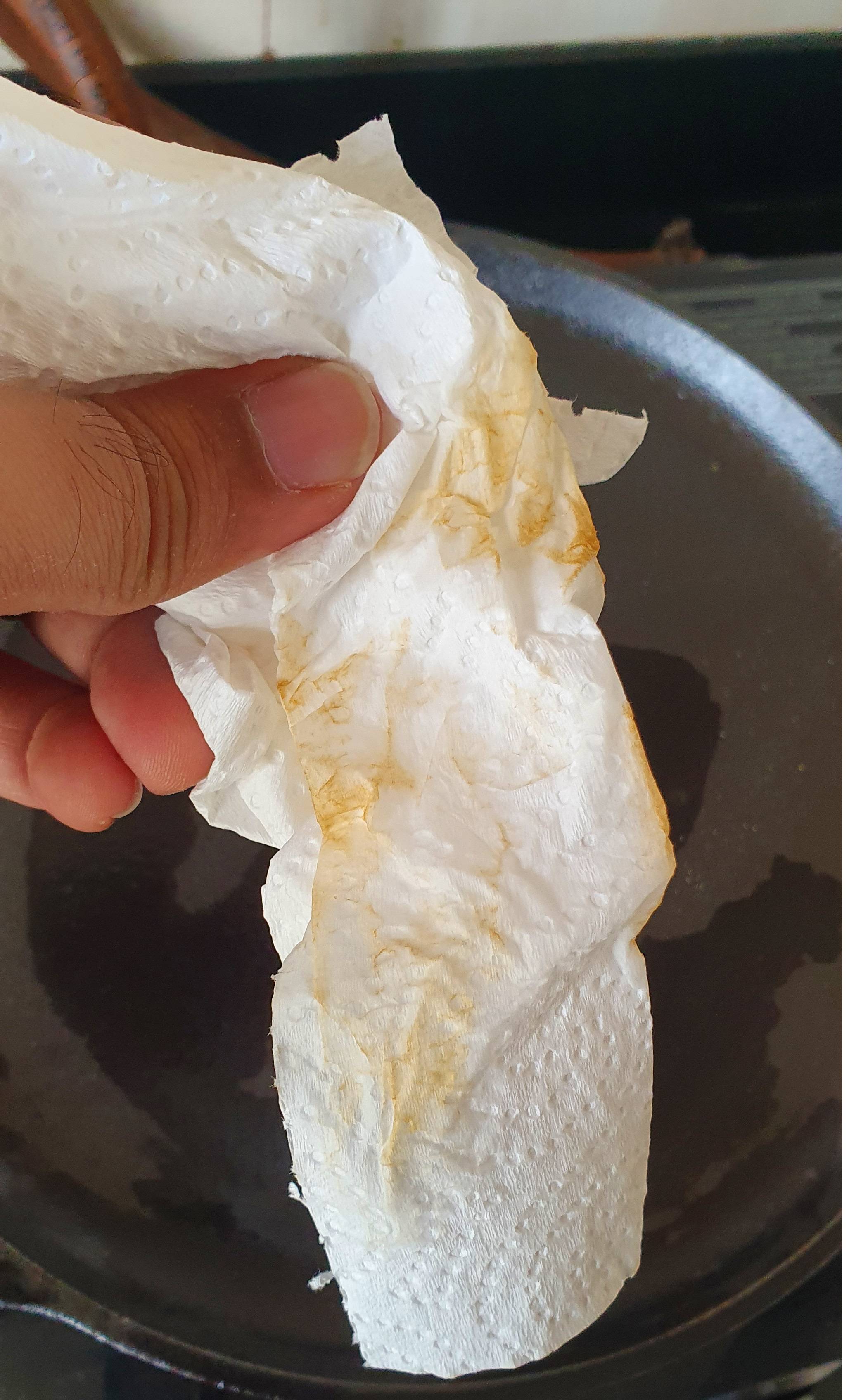 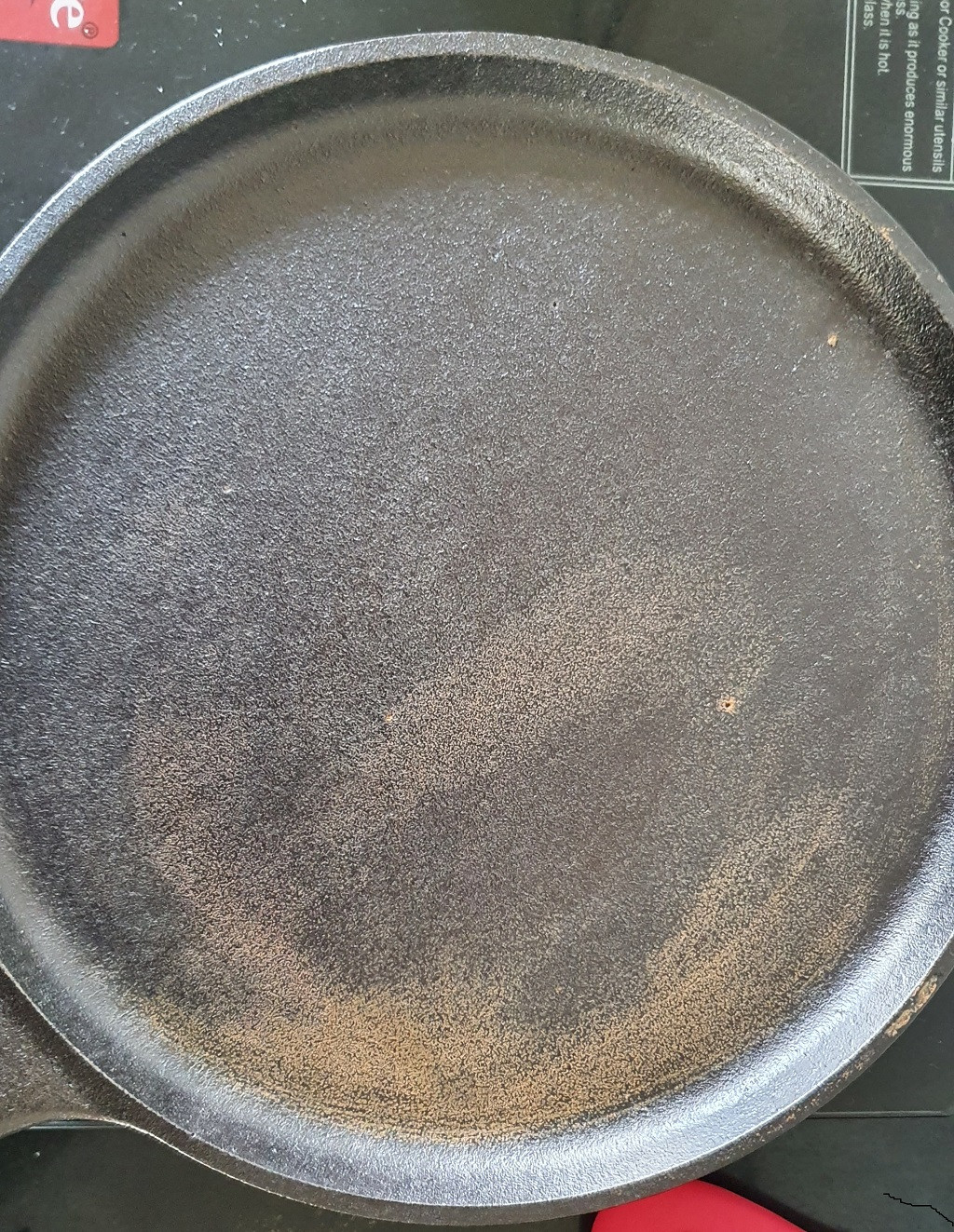 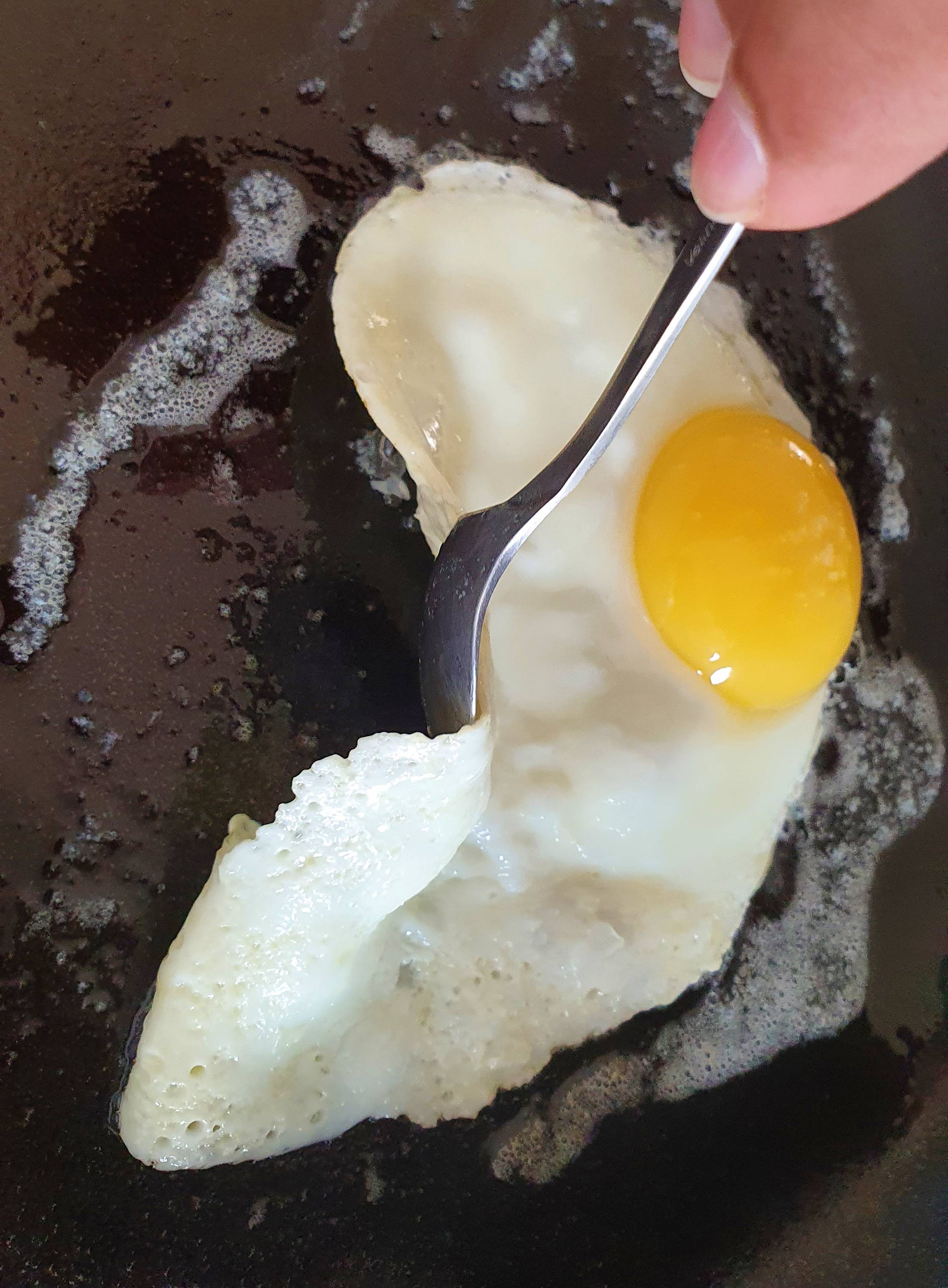 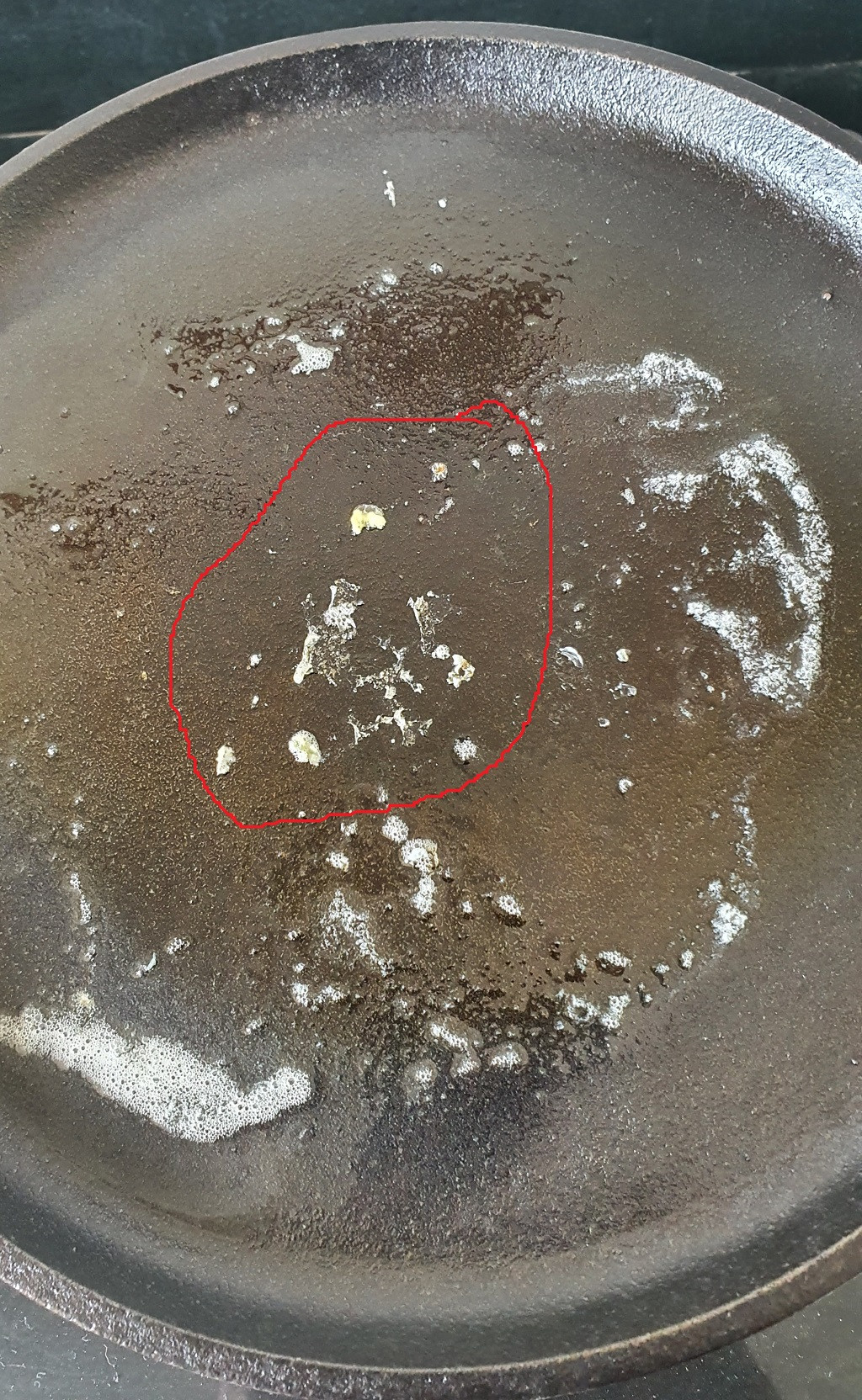 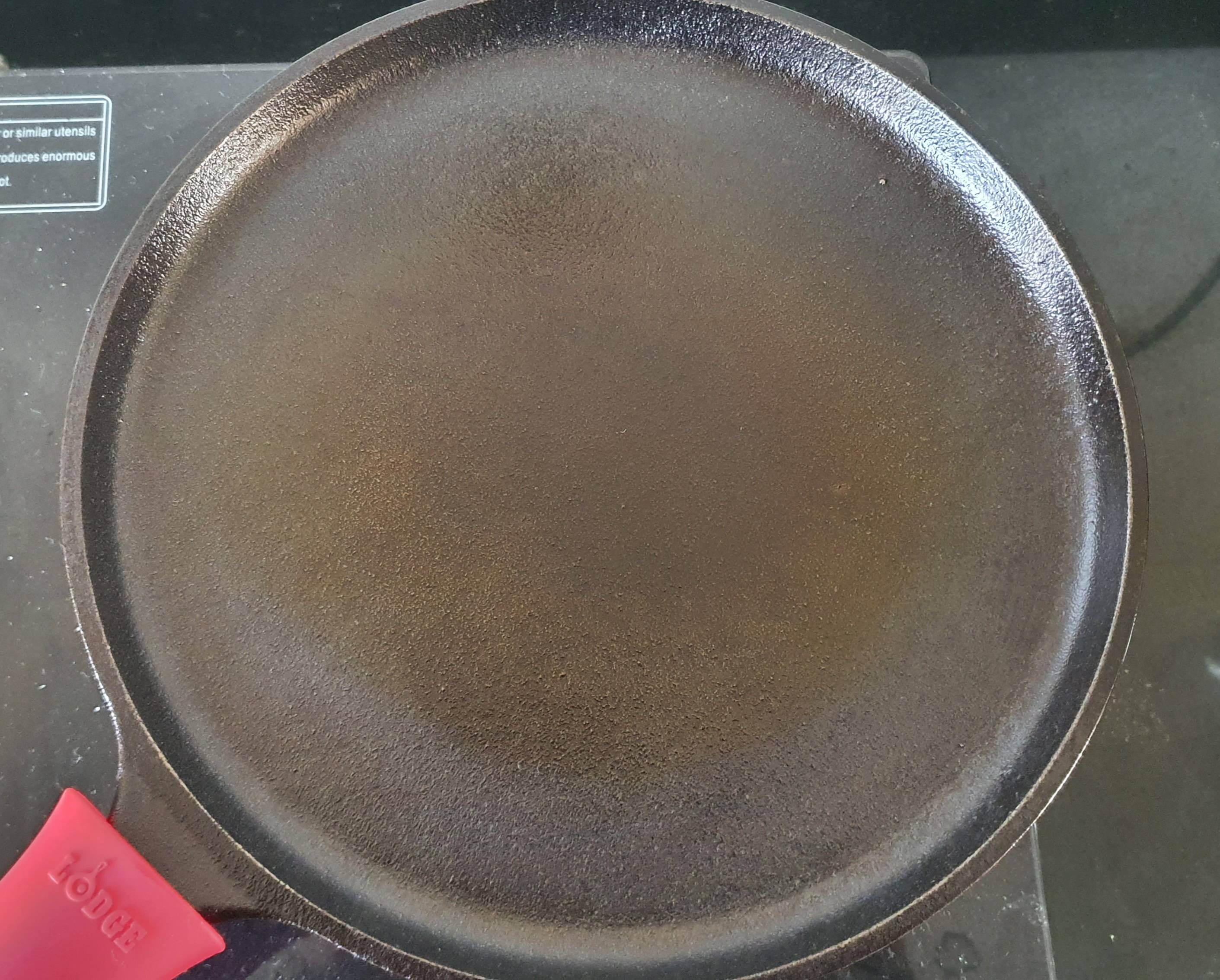 Not quite fully polymerized oil tends to be orangeish, but you usually can’t see it unless it’s your first layer over shiny bare metal, and I wouldn’t expect it to rub off on a paper towel like that

I suspect that you’re going to need to strip and re-season your pan. You only do that first deep scrub with pans that are waxed for shipment, not for pre-seasoned pans

We never season our pan in the oven; always in the stove. Ours has so much “seasoning, the “dimples” are pretty much gone. We don’t necessarily season our after every use anymore, just when it looks dull. We heat it up very hot over a high heat, remove it from the heat and rub, liberally, with a high smoke point vegetable oil. Let it cool and put it away. No one’s told us it’s wrong, but no one else I’ve heard of does it this way and it works.

Not the answer you're looking for? Browse other questions tagged equipment cast-iron pan or ask your own question.

3
Do you season a cast iron waffle pan before using?
11
Cleaning bacon in new cast iron
13
Cast iron pan has black residue on it
6
Rodent droppings on cast-iron frying pan
7
Can I season cast iron *without* using an oven?
1
hardened residue after high heat cooking (carbon steel and cast iron)
4
Why is acidic cooking problematic for cast iron pans but not BBQ plates?
6
Iron cast cookware: rust-ish or black coat even on new cookware, is it safe?
1
Bought a new pre-seasoned cast iron and not sure if seasoning is good
21
Seasoned Cast Iron NOT being Non-stick