What kind of yeast is this?

I have a type of yeast that I'm finding hard to identify by English standard.

These are picture of it: 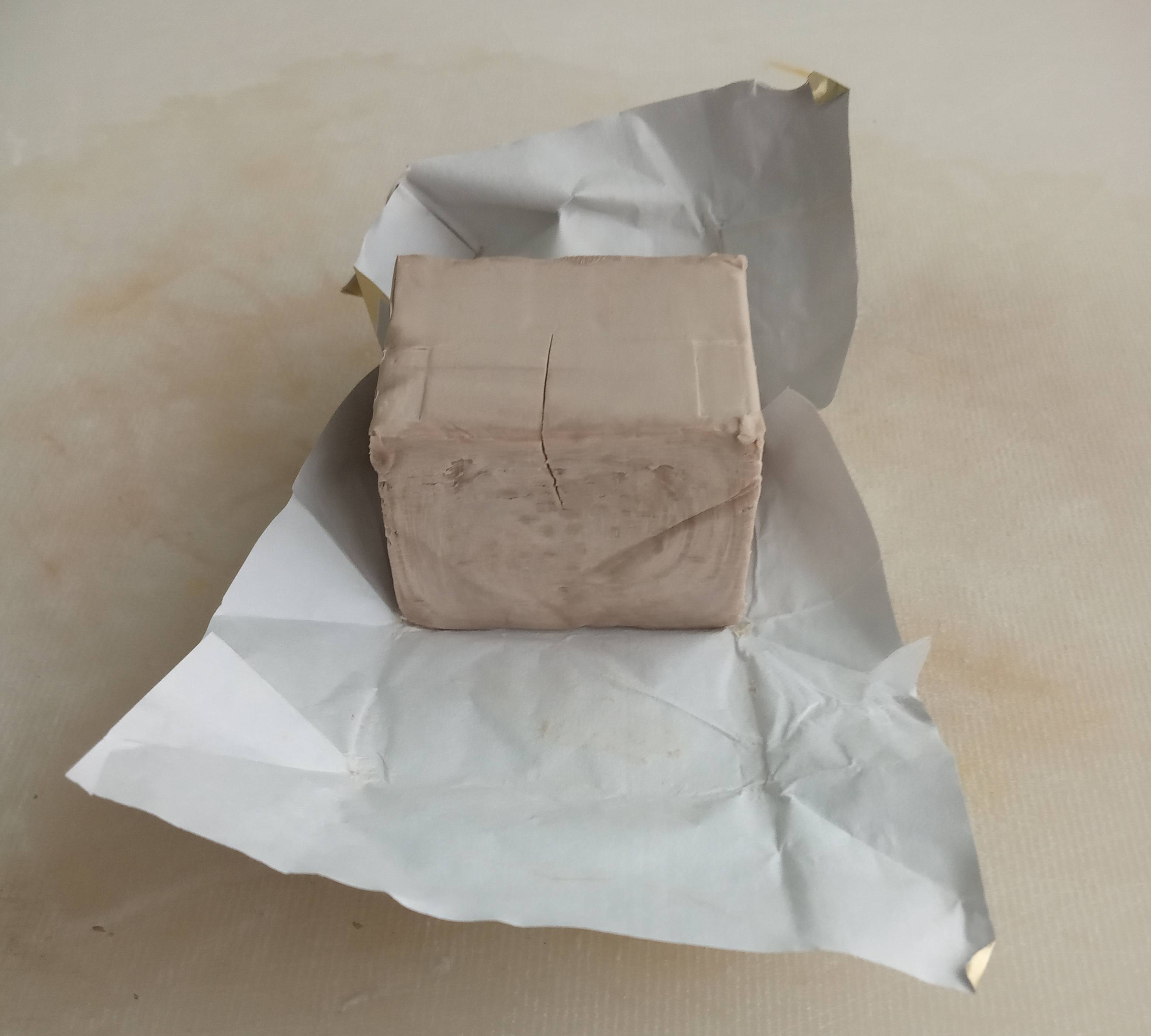 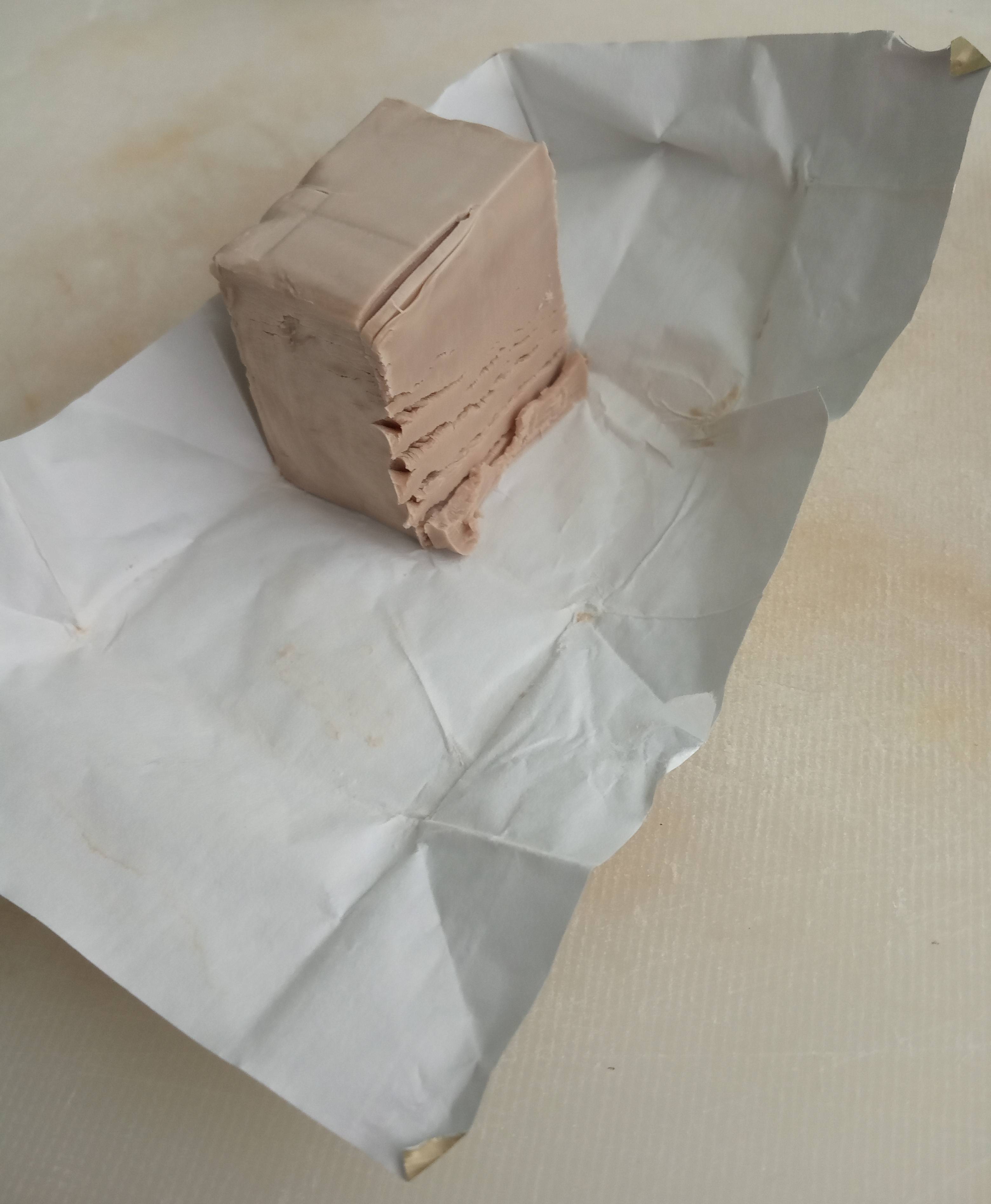 In my country, Bulgaria, we call it "live" yeast, despite that both kinds of yeast sold here are actually live. The other kind sold here (called "dry" yeast) is sold in little packets of 7 or 10g and inside it looks like a lot of tiny cillindrical thingies with tiny holes in them. I always thought those are the yeast creatures, themselves, but it might be a way of packing them.

Anyway, since there isn't much information about such things on the Bulgarian internet I want to look things up on the English-speaking one but I don't know if the yeast in the pictures is what you'd call "instant" yeast, as it doesn't look anything like what I've seen on the 'net for it.

The reason I want to know what it would be called in English is that I want to know if there is any difference in the bread product depending on the type of yeast used. From all I've read, both in ENG and BUL 'nets, the only difference between the "live" and "dry" yeast ("instant" and whatever the other kind was called) was that you have to "activate" one kind and you can straight up use the other kind right off the bat.

Is that the only difference between the types of yeast? If I don't care about "activation", can I use either one to the same effect?

In addition to the accepted answer:

This is called Fresh Yeast in English. There are two other types of yeast commonly available in the English speaking world, called instant (bread machine) yeast and active dry yeast. Both of these last two are more commonly used as they keep very well for extended periods of time.

Fresh yeast is basically a cake of yeast that has been filtered and pressed to remove most of the growth medium. It should be active as it is without any further additions. However, it does not keep for long in the fridge as the yeast are all active and need nutrients to survive.

You can not just substitute 1:1 fresh yeast with active dry or instant. They require different amounts for each. Because fresh yeast has some water in it, it requires a bit more yeast than you would use for the other two options (which also differ slightly as well). You must also check for activity (because the yeast doesn't store well) by placing a small amount of yeast into some warm water with a "pinch" of sugar and checking for foaming. The Spruce Eats has a good article on this. To quote the article:

Because fresh yeast has moisture in it, you should use 3 times the fresh yeast in weight for the same rising ability of instant yeast and 2.5 times the amount of active dry yeast.

In German, this is also call fresh yeast (or baking yeast).

It is mostly sold as 42g cubes (as shown in your image).

Historicaly, most peaple bought it in a bakery, where a 500g portion was subdivided into 12 portions (41.66g).

Once supermarkets started, the 42g size was retained since that amount was needed for a 750g loaf of bread.

It should be used within 3 weeks.

At stores around where I live (California), this type of yeast is referred to this as wet yeast and the other granulated instant yeast as dry yeast.

Some more info on the now identified fresh yeast:

Not the answer you're looking for? Browse other questions tagged yeast language food-identification or ask your own question.

7
What is the egg mixture used in gratins called in English?
19
How to get threads in a yeast dough?
14
Can you identify these chiles on sale in Serbia and Macedonia?
11
How can I make nutritional yeast?
3
What kind of soup is this lady most likely making?
10
English term to describe "kompot", an Eastern European beverage made from berries
1
What kind of cheese "skin" is this?
3
Is a pizza like this unheard of in the USA?
28
What kind of pickle was this?