Since my personal experimentation with fermentation tends to result in biological hazards and minor explosions, I tends to buy my fermented foods. I recently discovered a brand of store-bought jarred kimchi that tastes exactly right... the only problem is that it's not spicy at all. (It might actually have some spice, but I have a very high heat tolerance.)

How can I make my kimchi spicier, hopefully in an authentic fashion? Different varieties of pepper have different characteristics and flavors, and I'm trying to figure out the best technique and the variety/varieties which will give me heat without compromising on the flavor.

As an example or what I mean -- earlier today I was using the kimchi as a condiment and I mixed it with some sliced jalapenos. Jalapenos taste a lot like green bell pepper, so that was an unfortunate choice, and it wasn't very spicy at all.

I'd go for finely chopped red cayenne or bird's eye or similar. Supermarkets often don't properly distinguish between these & they are quite similar, but the bird's eye is generally smaller & smoother, the cayenne being more of a 'finger' chilli with an uneven skin. Neither have a particularly strong flavour, but they do have a lot of heat.
At a push, cayenne powder, though the heat of powder doesn't come through so well in a cold dish. It should be fine enough, though, to not add any gritty feel to the kimchi.

I really wouldn't go with anything as distinctive as scotch bonnet or habanero, they'll really change the flavour profile of the kimchi.

You can add hot pepper flakes.

Some advice on what brand from My Aunt’s Homemade Kimchi with a Vegan Kimchi Option:

We’re also pretty particular about the brand of Korean red pepper powder (or hot pepper flakes), gochugaru that we use. We recommend buying Wang Korean gochugaru. 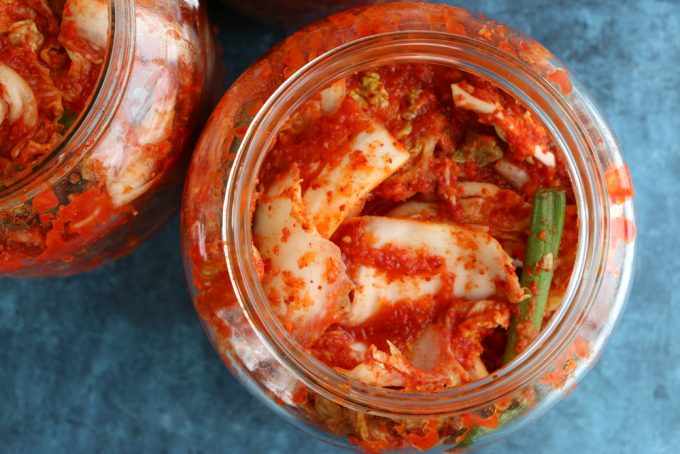 Of course, gochugaru is only mildly spicy. A spicier substitute would be Gochujang, a traditional chili paste which in terms of spice level can range from mild to very hot.

If all you want is More Heat, just use finely minced habanero or scotch bonnet peppers. (Use appropriate practices for handling extremely spicy peppers.) After adding the peppers, stir well and let sit for a day or two to let the flavors disperse. While those peppers are not common in Korean cooking, their concentrated capsaicin makes their other flavor contributions relatively small.

Incidentally, though, authentic kimchi is generally not very spicy (particularly by the insane standards of Korean cuisine). You might consider, as an alternative, having it with spicier food, or adding more spiciness to the dish you’re using it in.

What spice there is in kimchi, is usually entirely gochugaru, a dried and finely flaked or powdered chili. But adding gochugaru at this late stage is not a good idea, since it won’t have as long to hydrate so it could give an unpleasant texture.

Not the answer you're looking for? Browse other questions tagged flavor spicy-hot kimchi or ask your own question.

40
How can you make a sauce less spicy/hot?
15
How can I wash down spicy food?
3
How is it that zinfandel can taste spicy?
11
How do I get homemade mayonnaise to taste like store bought mayonnaise?
1
Does lime juice make jalapeños less spicy?
3
Is sambal generally more, or less spicy than the pepper it's made of?
1
Why is store bought frozen food worse than homemade?
0
Can this shrimp paste be used to make kimchi?
0
Can I make kimchi from “kimchi base”, or is it just a sauce?