How to soft boil an egg

Is there a fool proof way to make sure the white of the egg is set but either all or some of the yolk remains runny?

Very few people have tried a perfectly cooked soft boiled egg. There is a tradition among chefs of trying to show each other how perfectly they can cook something as simple as an egg. Chef Fernand Point, who serves as inspiration for the affable chef Gusteau in Pixar’s animated movie Ratatouille, would test his apprentices by asking them to fry an egg. With a responsive thermometer, such an infrared one, you can approximate their work at home.

If you ever get that mad scientist feeling, try cooking the egg in a bowl of water placed in the oven. Start with cold tap water in the bowl, place the eggs in the water and the ensemble in an oven set to its lowest setting. Every five minutes, check the temperature of the water in the bowl. If you are using an infrared thermometer, stir the water before measuring. Let the water hover between 65°C to 68°C for an hour. In most ovens you will have to turn the oven off and on to keep the water in that range. The result will be a bright yellow firm gel. I have a picture of the gel for the fried version of the mad scientist egg (what I call Eggs Mondrian): 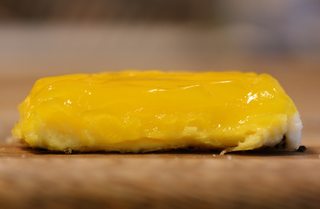 If you want the yolk runny, then the temperature of the water should be between 63°C (to cook the whites) but below 66°C to keep the yolk runny.

Read this article for complete scientific explanation of the process: Towards the perfect soft boiled egg

The most important part is this formula:

which with boiling water (100C) and a refrigerated egg (4C) results in these plots: 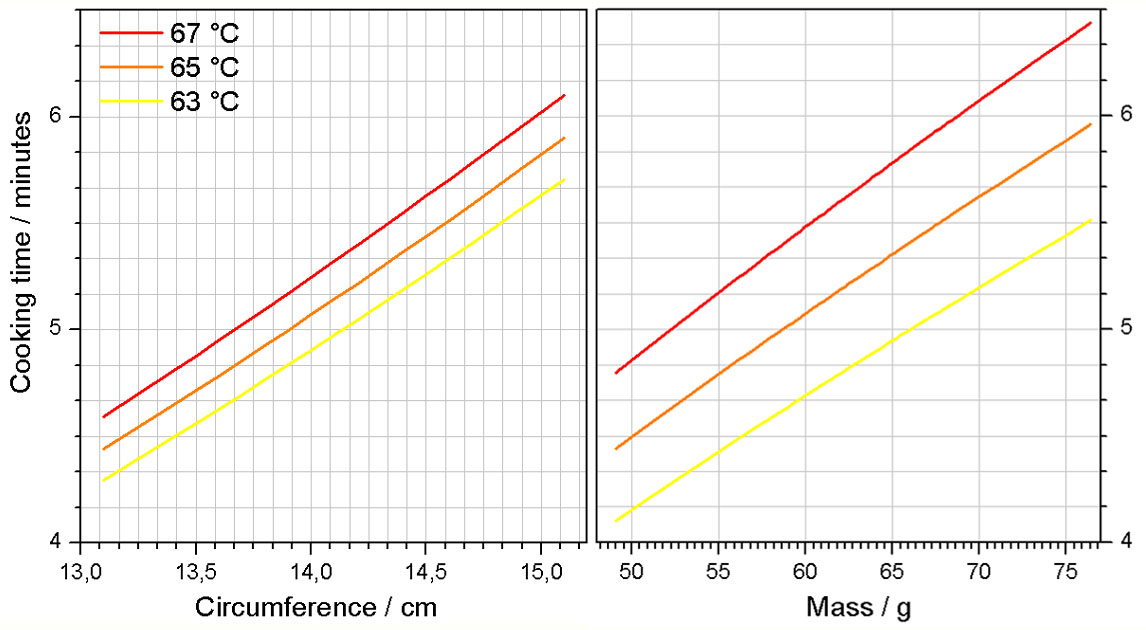 so depending on exactly how soft you want your egg and how large it is, you might want a cooking time anywhere from 4 to 6 minutes.

Cook the egg in already boiling water for 4 minutes and remove. Hack off (more like tap) the top of the shell with your spoon, add some sea salt, and dunk in slender pieces of toast until you have consumed all of the egg deliciousness. If the egg is cold from the fridge, put it in the pan with the water as you bring to a boil; if the egg is room temperature (better), drop it into the already boiling water.

Like you, I love a runny yolk and hate a white that isn't set! I've been experimenting with the soft-boiled egg a few mornings per week for the past couple of years, and have discovered the following:

To make a perfect soft-boiled egg:

I get ideal results from putting the eggs in boiling water and then turning off the heat. Start the timer.

I find 6-8 minutes is perfect, while up to 10 can produce good results. Once the time is up, pour out the hot water and replace with cold water. This helps both peeling, and to slow down the carry-over. The whites are solid but not rubbery, and the longer time benefits a creamy, orange center. It takes longer, but the results are really tasty.

Note: use enough water in a big enough pot so that the number of eggs doesn't overly change the water temperature, otherwise the timing will vary.

You can buy an egg boiler for cooking the eggs. Example: 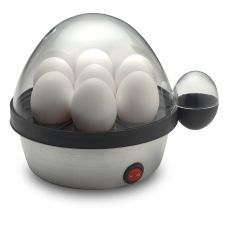 Not the answer you're looking for? Browse other questions tagged eggs boiling soft-boiled-eggs or ask your own question.

0
Help with boiling eggs
44
What's the right way to hard boil eggs?
2
Do I put vinegar in the water when poaching an egg?

10
How can I rescue a soft boiled egg that is too soft?
21
How do I make a fried egg with completely cooked white but completely runny yolk?
8
Sous vide eggs - how to get a perfect soft-boiled egg?
13
How can I create a scotch egg with a runny yolk?
2
Can you peel a soft boiled egg?
2
Baking and a rotten egg was cracked into mix :(
3
How to soft boil eggs with a countertop egg steamer?
2
Does the strength of the barrier between egg yolk and white indicate freshness?
10
What would you call this way of cooking an egg?