Getting even heat on a gas stove

I am cooking on gas stoves very seldomly, mostly in some hotel/airbnb's with a small personal kitchen. I often have this problem: the gas comes out in a ring of blue flames. I think more expensive stoves may have more than one concentric ring, but the ones I encountered always had only one circle of small flames.

If I put a large pot or pan on a large circle, then it seems to me that the outside portions of the pot are heated much more strongly than the center due to the direct contact with the flames.

If I put a large pot on a small circle, it seems more even as the gas hits the center first but then flows outwards more or less uniformly. But the small stove then usually does not have enough oomph to heat a big pot efficiently.

How do you do this? Is it just as I noticed, and there is no real solutions? Would a really good gas stove always have concentric rings and thus a more even heat distribution? Or is there some other technique to work around it?

As these are rented places, I suspect part of the problem is cheap thin-based pans, especially very thin steel.

I have similar gas rings at home and mostly don't have an issue - but I have a choice including cast iron and sandwich base if I need even heat. I'm currently using a fairly thin aluminium pan for omelettes, and even that is OK.

The exception on my stove is the only concentric one, the biggest, because the inner burner is pathetic. It's meant to be for woks (which of course are thin) but the hottest bit by far is halfway up the sides.

Note that your small burner towards the middle heats the pan more efficiently but less effectively, i.e. more of the heat from the flame gets into the pan, but there's not a huge amount of heat to start with. This is good for saving energy when heating up or simmering, but useless if you want high heat.

As for what you can do - not always very much unless you carry your own cooking gear. Sometimes there's a sweet spot using a fairly large burner turned down (as the circle gets smaller but the power is still greater than a little burner). Sometimes extra preheating of the pan and any oil is helpful. Stirring more than you might expect works for some things, but if that's not an option, sliding the whole pan around might be, so moving the hotspots every few seconds.

You could get one of these: 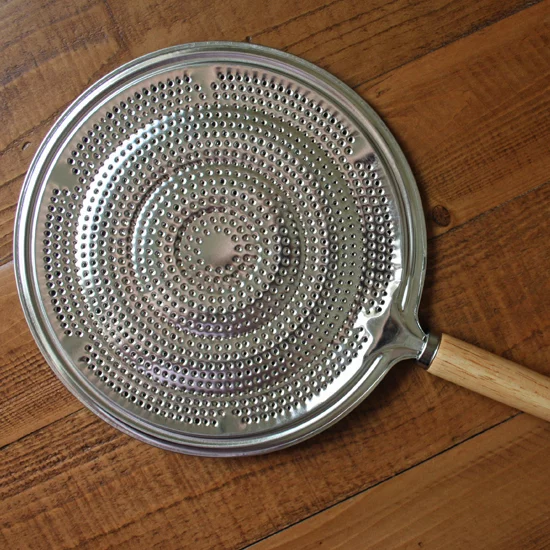 It's called a heat diffuser, and they come in many different shapes, sizes, and price ranges. A cheap one will probably do the job well enough, though might break over time. The general purpose is to reduce the heat applied to the pot, but it also causes it to be more evenly distributed. You might want one with larger holes so you're not reducing the heat too much, just distributing it.

At least in my cooking experience, the part where you would care about even heat mostly is some kind of browning process and tends to not lasts very long. If you move the pan around on the stove continuously, everything gets heated evenly. As a bonus, exactly that crappy type of sheet metal cookware that causes this problems is also the lightest, and thus very easy to handle.

Soups, currys, stews, pasta sauces... everything that is liquid-based during the cooking process doesn't care one bit about even heat distribution, since the convection inside the liquid is taking care of it automatically. Frankly, if I were only encountering this problem occasionally during traveling, this is what I'd do. Also it's a great opportunity to explore new types of dishes.

One technique I found useful when I cooked on gas was to more extensively pre-heat the pan. This doesn't work perfectly on thin metal pans, as you probably will see in a lot of short-term rentals, but it's better than not doing it. This allows you to cook at slightly lower temperatures while achieving more even heat.

If that doesn't help sufficiently, consider modifying how you cook (or, what you cook). Don't cook an omelet, cook scrambled eggs or over-easy or cook with a small amount of water, or one of the numerous other options that aren't as sensitive to heat evenness. Cook a stir-fry where you're moving things around the pan anyway. Fry in oil, which will handle the heat transfer. Lots of options for cooking methods that don't rely on perfectly even heat - just need to find the ones that work for you.

One needs to use the appropriate size burner for the pan size being used. On a gas stove , the flames should never come up the sides of a pot. If you notice the water is only boiling near the edges the burner is probably turned up to high for the pot size. This is the reason the better stoves come with multiple sized burners where as the low end one usually come with 4 burners of which 3 are usually identical and one may be a higher BTU output burner for large pots of water or 12 inch frying pan's . Your only choice is to pick the right size pan. On my six burner range, one burner is an 7500 BTU, two are 9500 BTU, one is 13000 BTU and one is 15000 BTU. The sixth burner is a concentric burner but both rings are nit in play at the same time. If you set the gas control between high and medium it uses the outer ring a 21000 BTU burner for boiling large amounts of water in a large pot. Between medium and low. it uses the inner ring which gives you a 5000 BTU burner delicate simmering. The other thing and this applies to nearly any stove, the quality of the cookware is paramount. This doesn't mean you need to go invest in 600 dollar All-Clad set of stainless cookware, but that 19.99 dollar pan at the discount store is probably not going to conduct heat very well and will have hot spots and be uneven. In the US I find off-price stores (like Marshall's, HomeGoods etc) to be an excellent place to get really good cookware at great savings.

Not the answer you're looking for? Browse other questions tagged equipment stove heat gas or ask your own question.

10
Does turning a gas stove on high move the heat to the outside of the pot?
3
How to choose a premium dual fuel range (Viking, Wolf, Aga, and the like...)
5
When does the new home oven/stove smell go away?
6
Slow Cooker makes a mess
5
How do we decide between gas, induction, and electric (ceramic) stoves?
3
Cooking pot with lid for saving gas but that doesn't overflow?
0
Gas stove burner
1
How can I get even heat from consumer gas stovetop burners?
2
Cooking Time vs Burner Size on an electric smooth top stove