Wild Sourdough Starter Never gets more than 1/3 bigger - Am I doing something wrong?

I made a wild sourdough starter back in July of last year. Did some baking with it, but it has never doubled in size the way that I see described in articles online.

I initially started it with all-purpose flour and aired-out tap water, but I've moved it to Bread Flour and Spring water. At best, I'll see it increase in volume by roughly 1/3.

I keep the Sourdough Starter in a pair of Ball Wide-Mouth pint jars, and feed the starter twice per day. The method I've been following for the past month has been:

Temperatures in the apartment are typically about 75-80°F by day, 80-85 by night. Starter typically peaks in 8-12 hours, 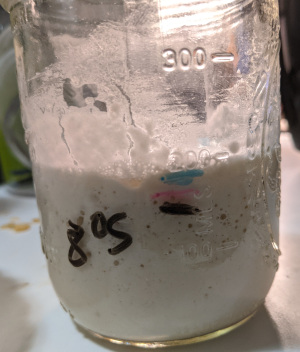 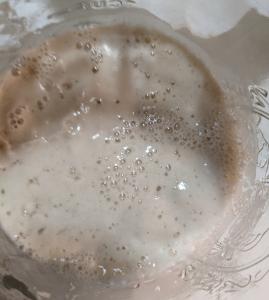 These images were taken a few weeks ago, after about 8 hours after feeding, when the starter was peaking. The black line is the original level after mixing, and the blue line is at about the peak. As I said, I've never seen my starter increase in volume by more than a third.

Why isn't my starter doubling or tripling? Am I doing something wrong? Could I remedy this?

Your starter is at 100% hydration. It's a thick liquid, not a springy dough. As bubbles of carbon dioxide form, they're free to combine into larger bubbles, rise to the surface, and pop. So the volume isn't going to increase much. The peak volume will additionally be significantly impacted by the temperature and the type of flour. And a starter not growing in volume is not strong evidence that bread dough made with it will not grow in volume.

If you want to check on starter activity, look for bubbles at and near the surface. But really, the best way to maintain a starter is to have a regular feeding schedule and somewhat consistent conditions. Then it isn't so much a matter of measurement, as it is one of being confident in your process.

Not the answer you're looking for? Browse other questions tagged fermentation sourdough sourdough-starter or ask your own question.