Doubtless, it's safer to push knives away from your hands. When I hone, I always do this like
this GIF.

Source for first image below.

But I just saw these images where the knife is being pushed TOWARDS the handle and your hand! Source for image 3. 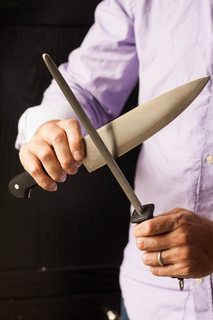 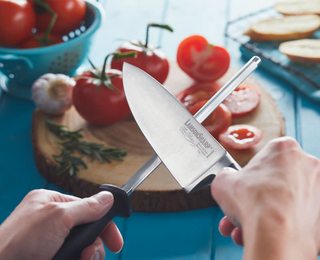 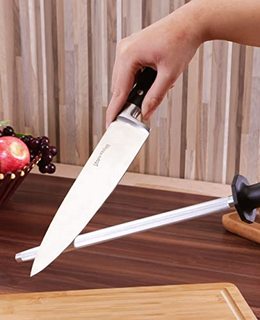 I'm trying to hone my Wusthof knife with my Grosche Zweissen 12 in. Ceramic Honing Steel. 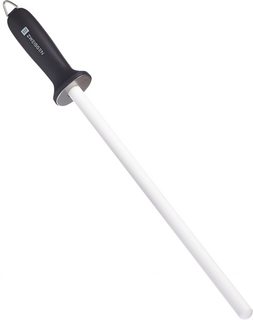 While it doesn't really matter in which direction you hone your knife, honing towards you is (a, but not the only) standard practice when you don't use the technique you pictured first, where a towel is placed under a vertically placed honing rod.

The reason is this: if you hone "freehanded", with the rod in one hand and your knife in the other, would you rather swing your blade outward toward another person, or toward you, where the honing rod grip usually has protrusions that stop the blade in case you slip? In a kitchen with multiple people working, blade honing outwards would endanger other people, hence why most chefs I know hone inwards.

Gordon Ramsay demonstrates the protrusions stopping a blade here, although he hones outwards, but with the back edge of the knife first.

I hone moving the honing steel because I'm a lefty. I keep the knife stationary.

To answer your question, there's no benefit, nor penalty, for honing one way, or the other. Do whatever feels natural to you.

What's important is maintaining the right angle, and also the right pressure. You should start with a high pressure and gradually you should lower the pressure.

As long as the back of the blade leads in the direction of travel, there is no advantage either way. If the edge is leading, the advantage is not in how one avoids injuring others, but rather that you are worsening the blade, not honing it.

For whatever marginal value of safety is provided, directing the back of the knife toward you and pulling in would be safest assuming you do not go for speed and swiftly reach the blade edge back toward the outside world in an uncontrolled manner.

Of course, that "uncontrolled manner" thing is the real issue. Firstly, many people just have a natural tendency to jerk and jab around and they often do not take special effort to overcome it when honing. So there's a bigger... mmm... personal space around them required if they are going to hone near people and things. Actually, do ANYTHING around people and things. You've encountered these folks. For them, ONLY the back coming toward them is safe at all and that only worries about half the movements anyway.

Another type of soul that is inherently unsafe is the one caught up in the fact that this is one of the kitchen techniques that "Looks cool. AF. LCAF." The wilder their actions can be, I mean the showier their actions can be, and still have the scrape of steel, the better. For them. They aren't going to do a lot of honing anyway because they don't ever really consider which way they are driving the "serrations" that make up the real edge of a blade. It's all about the show. And recall bias (recall of both chance success, as well as actually false memories) to convince them they are doing it right. Bad knives mess it up for everyone! This blade sucks!

Or the tool. If the hone hilt was really meant to protect, rather than just provide a saving throw, it would be closer to a basket kind of hilt with the outer edges curling outward, not inward (so more of an inverse basket that the old basket hilted Three Musketeer swords), not short bit of metal that serves more purpose giving you a three-dimensional "hold" on the hone than providing any safety.

I just looked at the Gordon Ramsey video that John W. links to. Looked, didn't check the sound (work). But he actually shows proper technique with the straightening of edge serrations rather than curling of them. And I've seen MANY of his (and pirated "his") videos and shows over the years and always, always have seen him to do it the right way, even in throwaway scenes where it doesn't matter to the scene. Alton Brown... talks a good story, knows the point, but in throwaway scenes is not careful about just what he shows, the glitz apparently being the thing.

I absolutely HATE that in a TV chef. Yes, many folks couldn't care less and they are aware of it, I'm sure, since this is their profession (TV, not "cheffing"). But many people, myself included, actually watch all the more closely when seeing something of interest that is not the focus of a scene and therefore has no verbal explanation. And in this respect, almost all of them fall flat down. I spot Alton Brown his falls since he actually knows what the concern is — I've heard him talk about it in detail. But so many... it's just one more "I different. You marvel." thing. Like the whole upside down fork thing. Yeah, you see people doing it in real life, but a chef? He's doing it for show. Throwing smallish food into his mouth, not placing it there. Show. Lots of show, show, show.

Their attorneys should be addressing it with them, but... they don't, apparently.

So do it for real and scrape it along the hone with the back edge leading. You achieve two things:

#2 is where almost all your safety comes from, not from direction of travel. And for my money, since I won't be honing when the finish of my outstroke would be closer to people and things than the finish of my instroke would be if going toward me, overall safety is improved by finishing away from myself. If honing in a crowded subway car in NYC, well, toward me. Until kicked off by a transit cop.