After just 2 days of using my new carbon steel wok pan, I noticed something suspicious inside it: 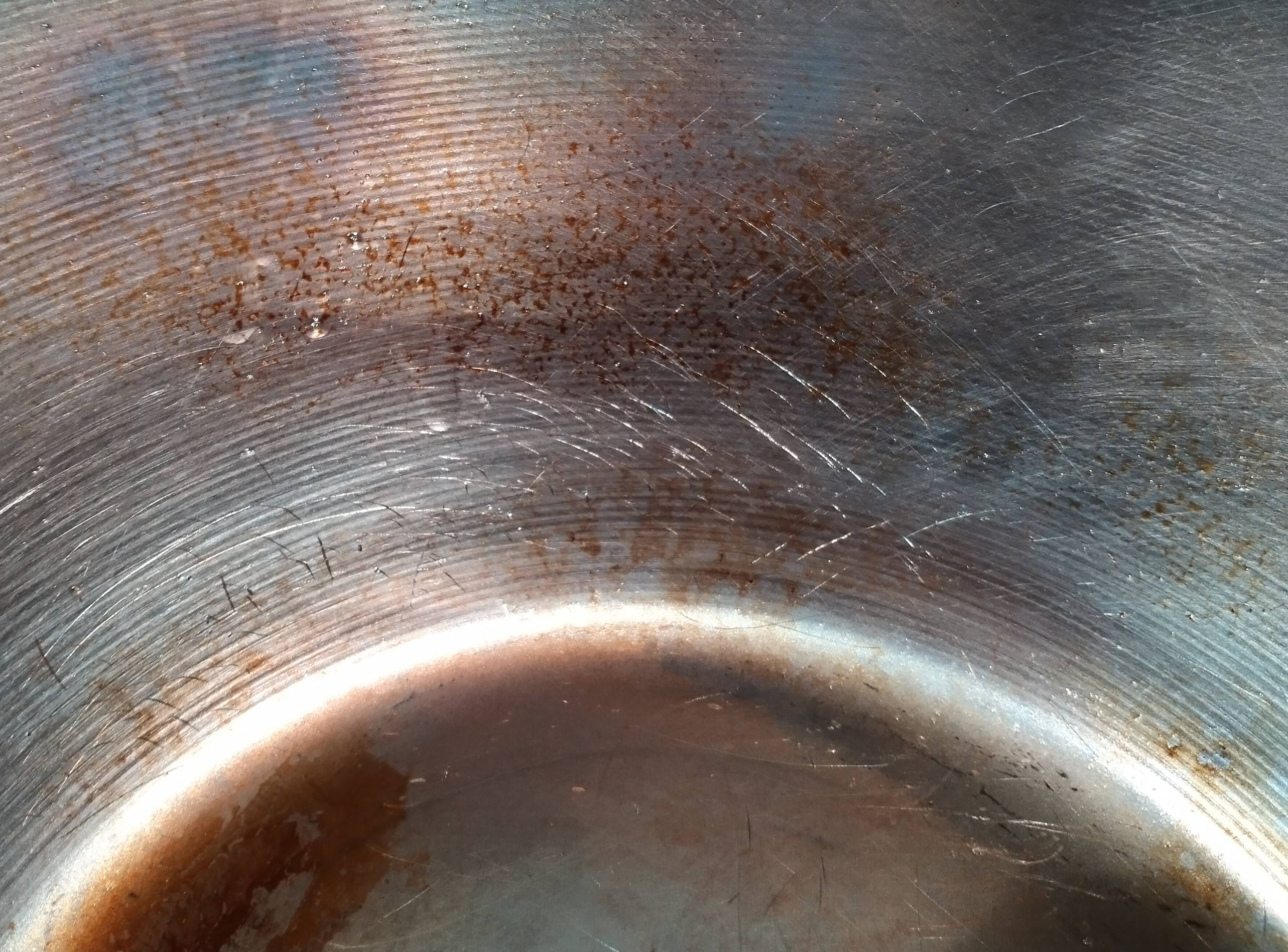 Looking back on it, it was probably just burnt oil and nothing to worry about. However, I mistook it for rust, and began my arduous journey to get rid of it. (Let me know what you think it was and what to think of it in the future, please)

First I scoured the spots with water and plastic scouring wool, then added some dishwashing liquid and continued the process, but it had practically no effect on the spots even after tens of minutes of work. Eventually I just chose to nuke the pan and start the seasoning process all over again.

I decided to try soaking the pan in acid and filled it up with water, adding some grams of citric acid into the mix. After some 20 minutes of waiting and haphazard scrubbing, the inside of the pan looked shiny enough for me even though there were still some bits of crud left. I removed the acidic solution and, just to be safe, filled the pan with water and some grams of baking soda in order to neutralize the acid. (Looking back, I do not think this was enough)

After that, following the guidance of numerous internet guides (e.g. 1, 2), I wanted to temper the wok again. I assumed that the protective oxide layer formed while bluing the pan for the first time had been erased along with the rest of the seasoning.

However, after I had blued the pan and waited a couple of minutes for it to cool down, a horrible sight awaited me: 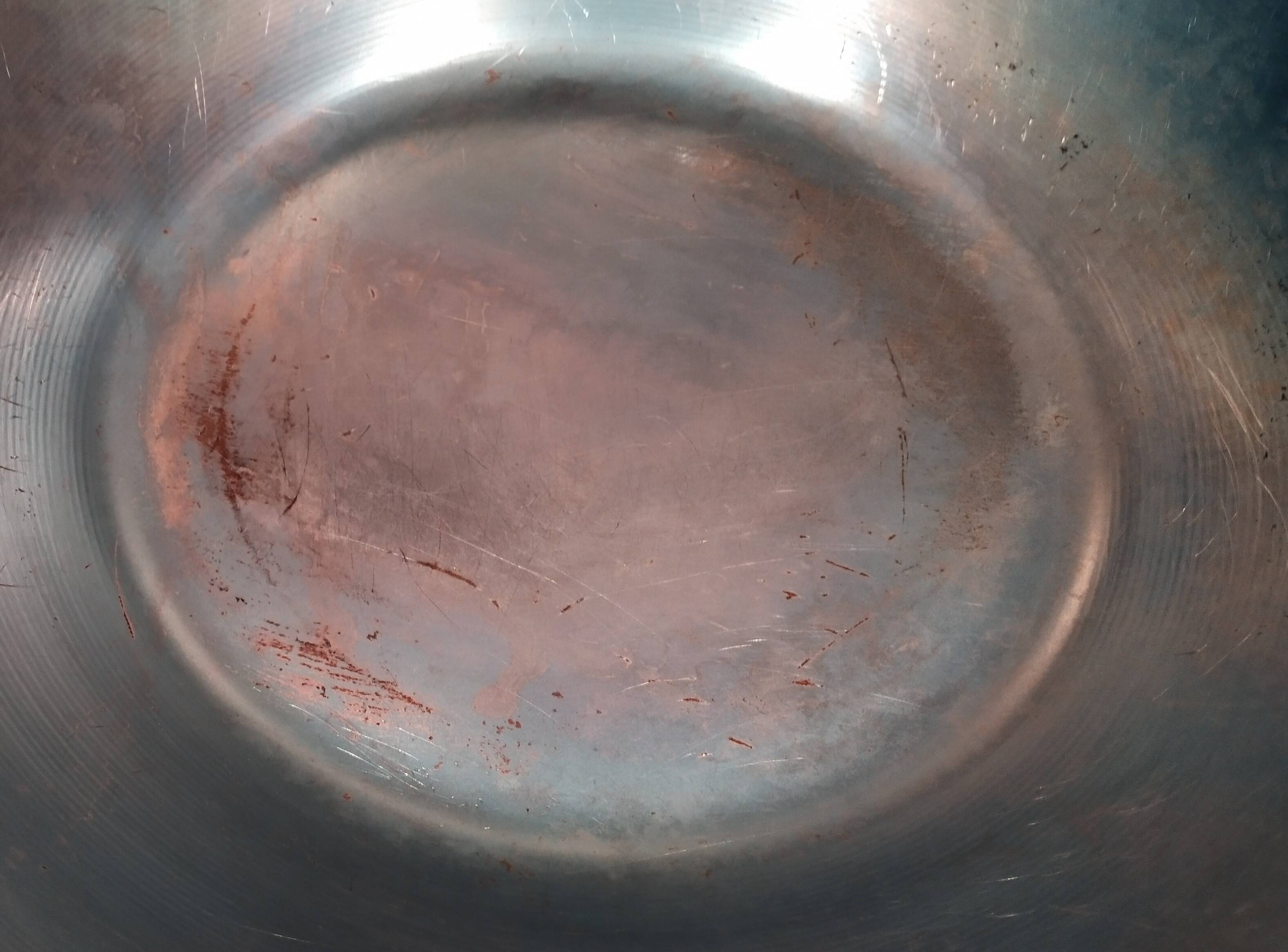 I am almost certain that this was rust—the infamous flash rust.

I was petrified. Too demotivated to start the process all over again, I tried to season the pan, hoping that the "rust" was just a harmless byproduct of the bluing process. (Though I had not seen it when tempering the pan earlier)

This ended just about as well as anyone could expect: 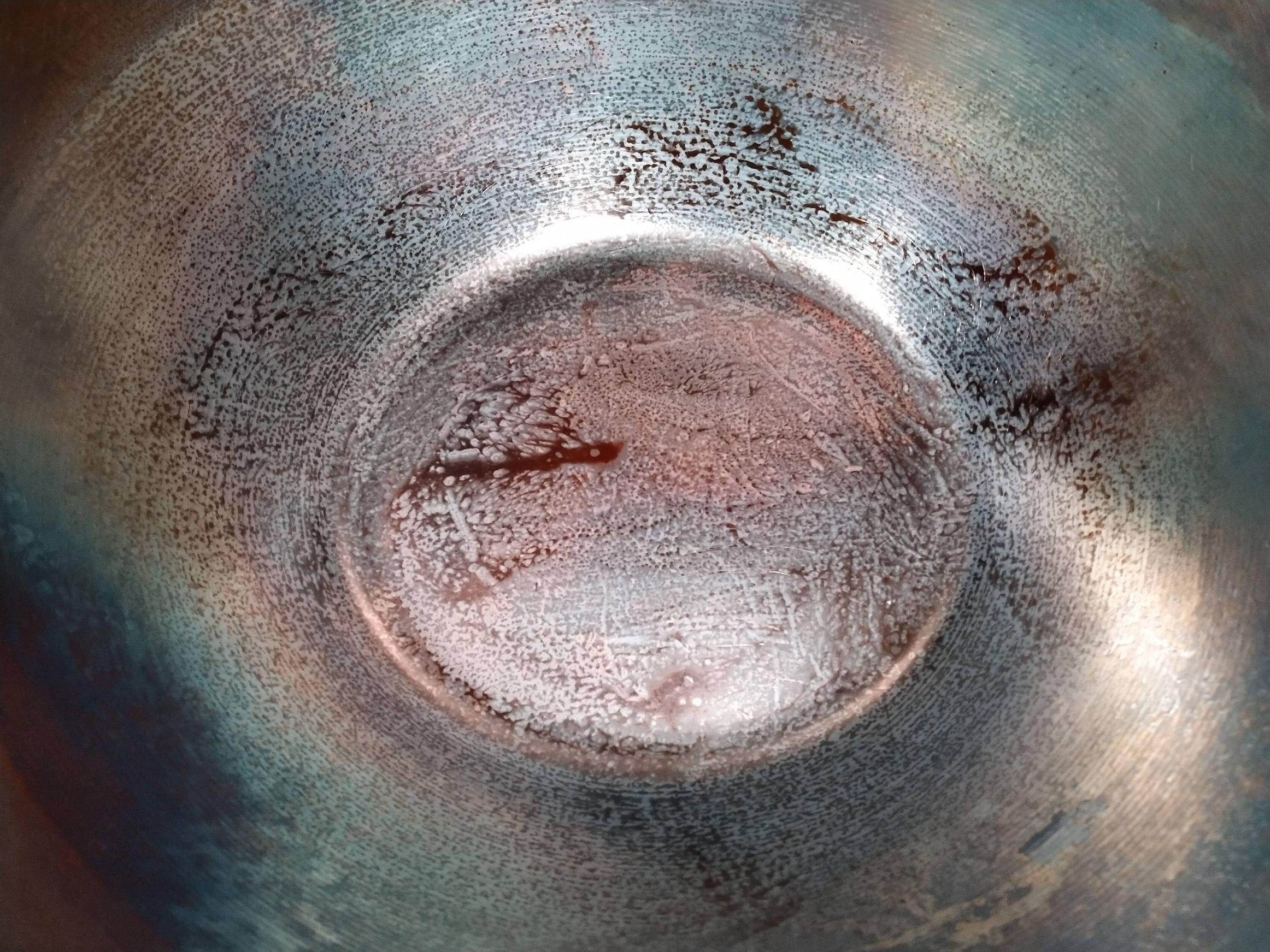 I had clearly botched the seasoning. In hindsight, I think I may have tried to polymerize the thin coat of rapeseed oil over heat too high.

Thus, my main problem is as follows: how do I prevent flash rust from appearing after tempering the pan? I quite clearly cannot just rub oil on it to protect it while it's at 350 degrees celsius (≈660°F)... Do I just have to cool it down really quickly with water? Also, what caused it? Acid residue?

In general, how should I proceed? Can I, or should I, even repeat the bluing process again while reseasoning the pan? How acidic should the initial nuking solution be; is more acid better, or less?

Your first picture might be the beginnings of a seasoning layer, though a bit lumpy & uneven from poor technique.
"it was probably just burnt oil and nothing to worry about" - yeah… but that's what you actually want. That's the seasoning, or the very beginnings of it.
In the later photos, I see no evidence of any seasoning remaining… nor, in fact much blueing. Personally, I think the blueing* is a waste of time so long as you make sure to get rid of any industrial oil from the surface before you season it. I'm sure the thrashing you've given it will have done that. What's left is an unseasoned pan that will rust if you so much as look at it askance.

It's the seasoning that prevents rust. You can scour it all you like, but until you get a proper polymer coat on there it will just keep rusting again. Seasoning is not oil - it's what oil turns into after heating to a high temperature for a long time, almost a plastic; a polymerised coating. The first layer or two will look yellowish to brownish [but not red like rust]. The more layers you get on it, the further towards black it will go. Many very, very thin layers are far better than one thick layer, which will just peel or chip off.

Neither of those links gives me much confidence, tbh. Try What's the best way to season a cast iron skillet? instead, & just do it upside down in the oven, 5 or 6 times… once you've got the rust off again.

*heating mild steel until it goes blue isn't really 'blueing', which is a chemical process, it's case-hardening - similar to what a swordsmith would do. It has two purposes, to harden & to resist rusting. Unless done properly it actually achieves neither.
By far the best way to protect an iron pan or wok is to season it. Do it properly, use it often & you'll never need to do it again.

79
What's the best way to season a cast iron skillet?

9
Thick carbon layer on wok?
15
Wok patina comes off
0
Is my wok carbon steel (it is magnetic)and how do I proceed - seems I am ruining it
1
de buyer mineral b carbon steel seasoning
0
Why did rust appear after my first layer of seasoning?
2
What's the best way to remove a light coating of rust from a carbon steel paella pan?
0
Flash Rust Under Wok Seasoning
1
Can you season over some thin flash rust and get a usable pan as a result? What are the downsides of doing so?
0
Carbon steel wok --- is this seasoning "good enough"?