(How) Have I ruined my titanium pan?

I have a Zwilling Forte titanium pan with a five-layer T-Ix non-stick coating (which I understand is just the name of the titanium Layers). According to description it's supposed to be super durable (even using metal utensils; that's why I bought it) and suitable for oven up to 250 °C. It's just over a year old and so far I was very happy with it.

Recently it's started to lose the non-stick qualities. I noticed some black spots as well as scratches. I have to admit I'm not very good at caring for it properly so I wondered if it's just burned-on food.

I couldn't get it off, so I was googling how to clean very burned on food. I used just soap (Amway dish drops) and hot water. The final attempt was sodium percarbonate and some boiling water. I was scraping with a plastic spatula. The water came out pretty brown and now it reveals what appears to be peeled-off spots (see picture), and quite a lot of them. 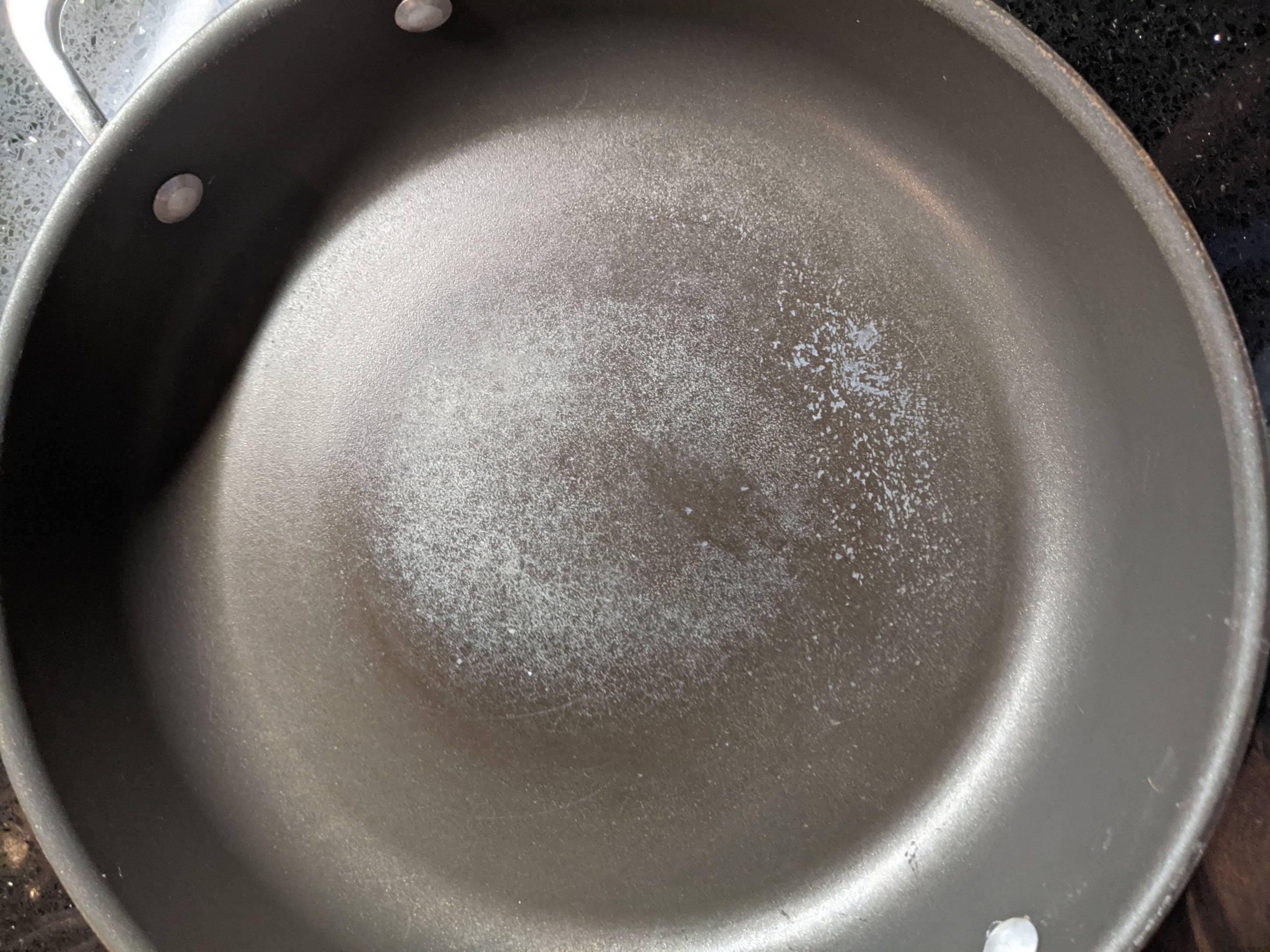 Have I done that with the sodium percarbonate or some other way? I have used a metal spoon literally a handful of times when cooking, never a knife or anything sharp. It's been used a lot in the year, cooking basically everything, including acidic foods. It's been used in the oven quite a bit too.

I noticed some minor scratching after my first use of a metal spoon, but nothing too bad and it still worked pretty well.

Can I still use this safely? Should/can I season it like a cast-iron one to make it work again?

I'm no chemist, but a quick googling shows hydrogen peroxide [sodium percarbonate in water] to be quite aggressive on aluminium.

I'd guess that some light surface scratching, which would otherwise have been quite survivable* in itself, allowed the peroxide to leech under the non-stick surface, attack the aluminium substrate & allow larger flakes to break away.

Been there, done that, with similar aggressive chemical cleaning methods.

In future I wouldn't use anything other than Barkeeper's Friend &/or a mica block to remove any surface patina. See Removing long-term residue from teflon

Judging by the pattern of the damage, I'd say the pan has been used too hot on too small a burner. All the damage & discolouration is in the centre. 'Teflon' & non-copyright substitutes, no matter what toughened aspect the manufacturers claim, really can't stand very high burner temperatures.

As to whether you can use it safely - sure, most of these modern surfaces won't peel off in sheets like old-style teflon, nor are they 'poisonous', so it's reasonably safe to use. Can you get it back to truly non-stick… doubtful. You can kind of season aluminium, so you could give it a go - oiled, upside down in the oven, same as iron or steel, but don't expect miracles.
Personally, I'd mark this one down to experience & treat your next one more kindly. I'd also studiously ignore any claim you can use metal utensils &/or put in the dishwasher.

*A lot of these new style 'not teflon' pans seems to have a roughened surface, which I imagine allows the very tops of the 'bumps' to suffer some abrasion, whilst keeping the majority of the surface unscathed.
I now have a couple of these, one cheap as chips, the other an arm & leg; and shall be monitoring their progress over the next few years. So far, so good.

While pouring a caustic chemical on your non-stick and scraping it with hard plastic didn't so your coating any favors it was very likely already damaged. How this damage came to be is impossible to say exactly, but here's some ways it could have happened:

Now all those are mistakes but it's entirely possible you didn't make any of them, you may have lost your coating just through use. Even if you baby them their coatings break down over time through repeated heating and cooling cycles, exposure to oils, acids, etc. All the 'tough' and 'durable' marketing stuff is a bit deceiving, these things may be more durable than their predecessors but they can only stand up to limited punishment. If you were cooking everything with this pan and not paying that much attention to how you treated it then it's probably done all right for you, in the future be a bit more careful and use your good non-stick for the appropriate cooking jobs.

Looks like wear and tear. As others mentioned, non-stick coatings are gentle creatures. No matter what the manufacturer claims, I'd stay away from using any metal utensils, dishwasher, and any harsh cleaners or supplies. They will still wear out eventually, and to help me feel better about discarding a worn out pan, I just stick to the inexpensive Ikea ones (Zwilling Forte sure is pricy). Consider a cast iron pan for the more demanding cooking jobs.

5
Cleaning brown/gray spots on overheated stainless steel stock pot
9
Thick carbon layer on wok?
1
Anodized pans? Cleaning?
2
Panko-breaded tilapia, medium fried, non-stick pan, absorbed oil
2
How do I clean off bread stuck to a non-flat / patterened cast iron pan?
2
Pan stain after roasting cheese
3
Care Instructions for PTFE Nonstick Pan: Function of First Use 'Seasoning'
4
Why are British cooking shows seemingly more lax in terms of cleanliness?
0
What is the best practice to making good fried rice without sticking to the pan?
23
What exactly is this residue and how do I clean it off?