What is the science of drying/dehydrating meat? Biltong, jerky, etc

What is the science of drying meat?

This is a cross-topic question, but I think it's best suited here. Let me know if it should be elsewhere...

I am South African and one of our traditional snacks is 'biltong' which is essentially air-dried meat (beef most commonly). I know there are many different types of dried meat from different parts of the world, which are significant in different societies and cultures, which is facinating. Biltong is traditionally very simply seasoned and air-dried in the South African climate but is made in driers nowadays, particularly in climates outside of SA.

I no longer live in SA (live in UK) and make my biltong in a homemade drier. It essentially comprises of a wooden box, with a small fan and a very small heater. Beef is hung until it's dried to my liking. Drying of meat is an (inexact) art and there are a number of factors that influence the final product, which means drying times change and each batch can be different. When drying, you also dont want to dry too fast, as this can result in 'case hardening', where the outside is hard and the inside still raw and very soft, the best is to slowly dry, so you get a consistent dryness and texture throughout the meat.

I am a physicist and interested in the science behind meat drying and have the following questions:

I am interested in the above, so that I can write an algorithm to control the fan and heater. I am also potentially interested in sharing data that I collect on drying and relationships with different environmental variables, see below.

I have constructed a complex drying chamber, which measures all environmental variables inside and outside of the chamber (using a Raspberry Pi) and has a controllable fan and heater. I am also looking to upgrade with a weighing facility, so I can measure the temporal variation in temp, RH and weight and to relate these variables to drying times.

Any ideas/observations or recommended reading would be gratefully received.

Some photos of the drying chamber and the web dashboard I have created. All work in progress...ignore the data on the dashboard - i am exploring different configurations and fan speeds. I will also add the fan speed (RPM and frequency) and heater status to the dashboard. Note that there are some spare (intentional) relays, so i can add a second heater, UVC light etc... The box is completely yacht varnished so it can be hygienically cleaned after each use. 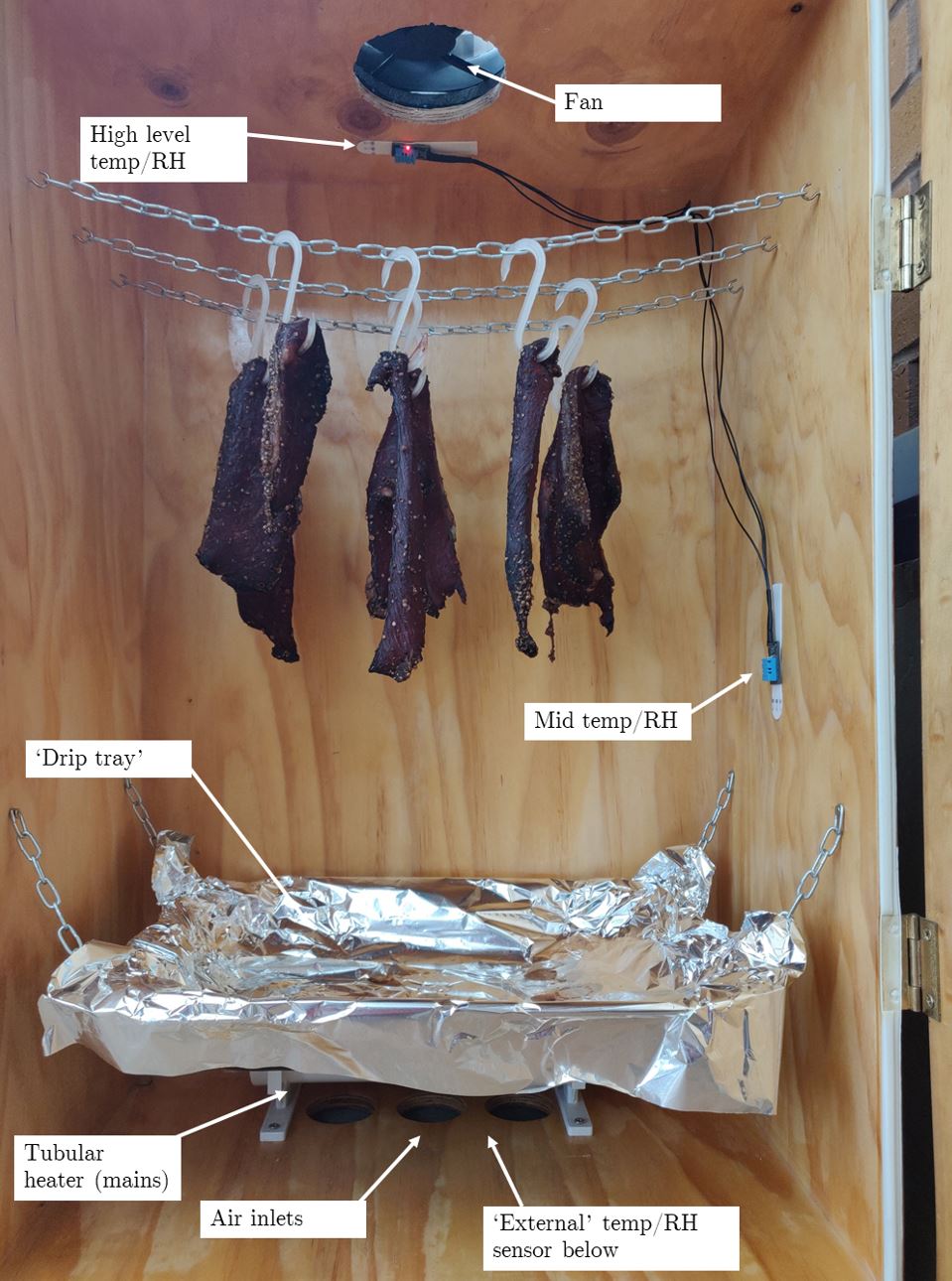 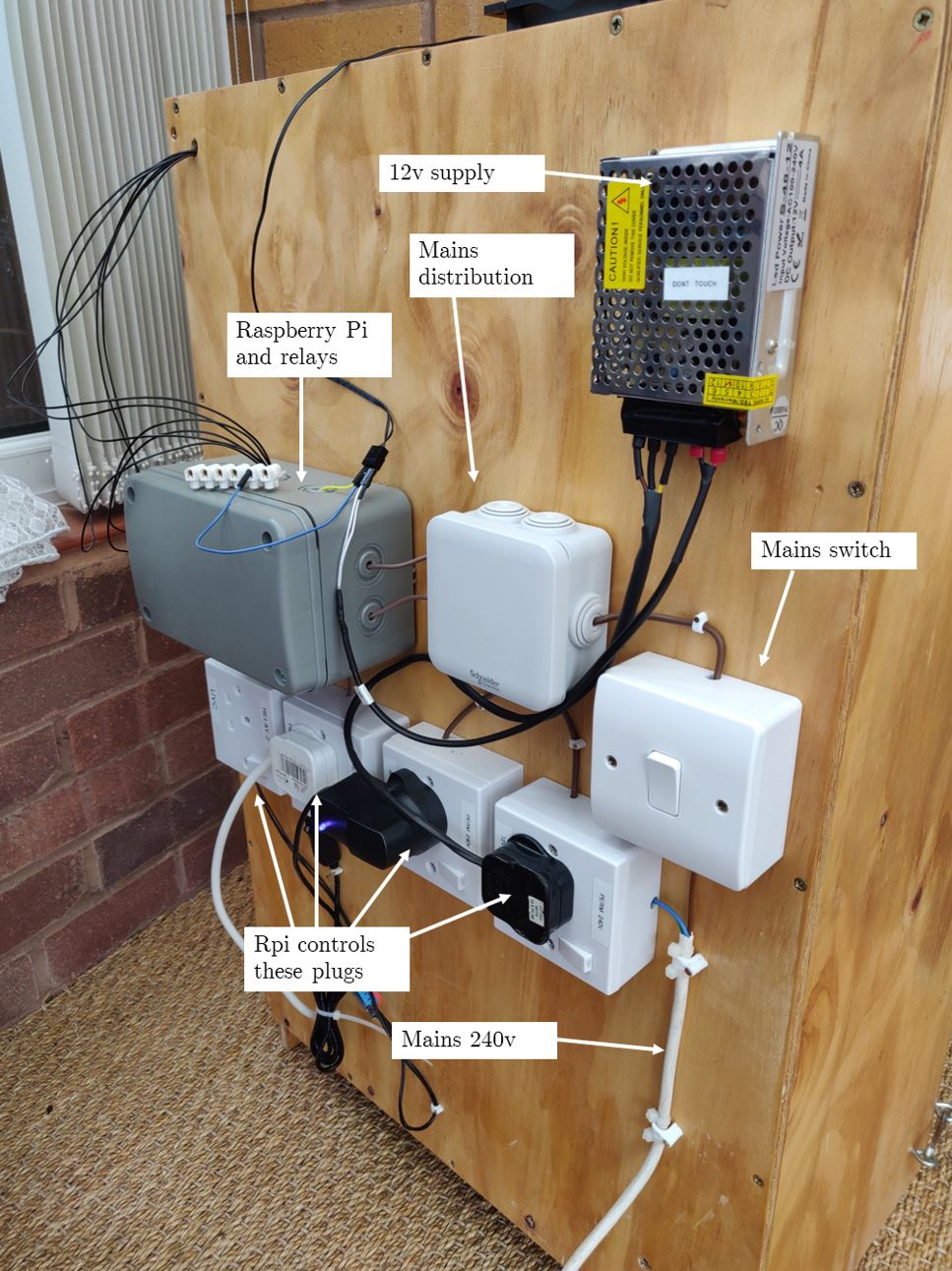 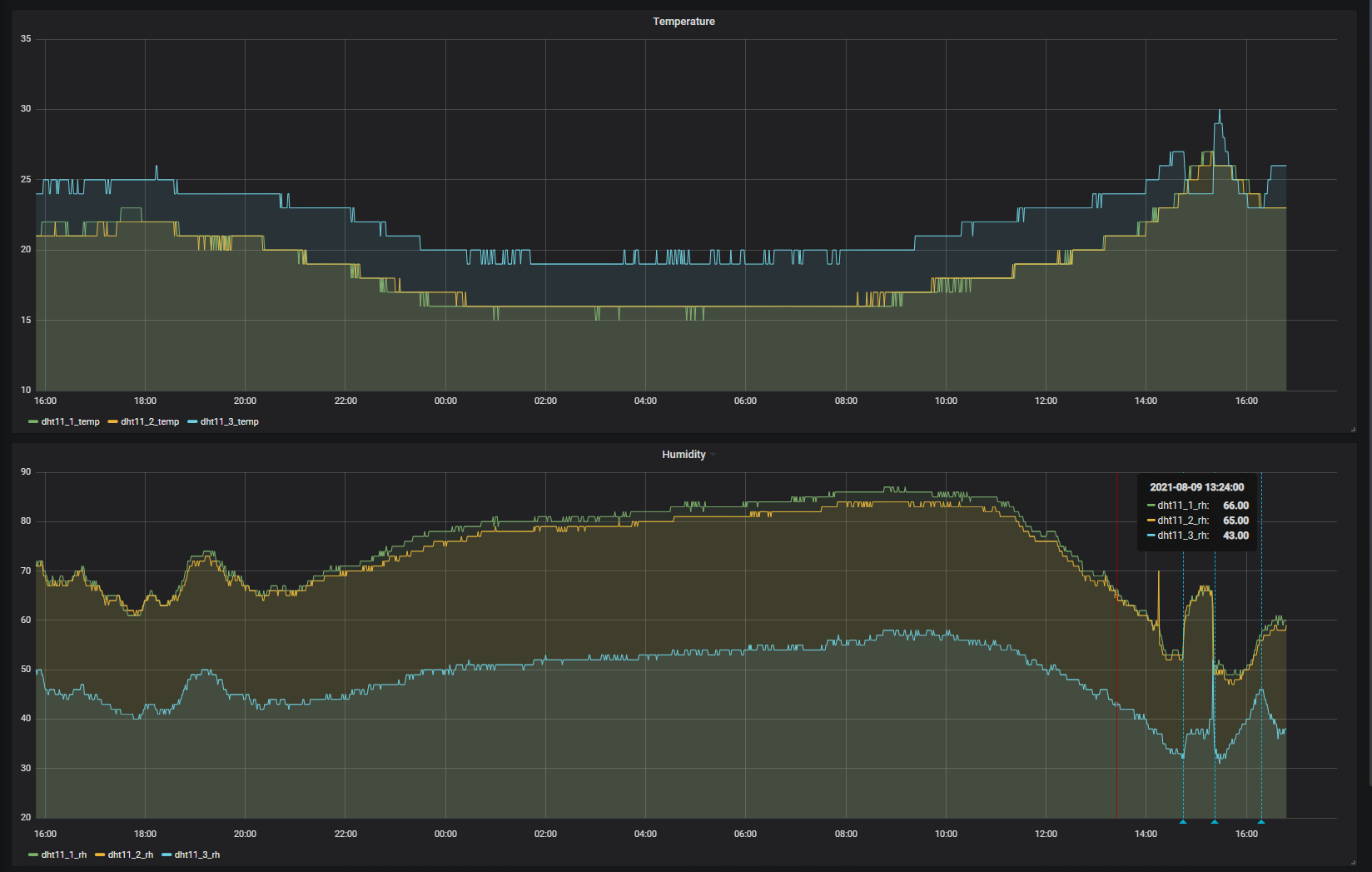 To address your questions first:

1. Is there a recognised relationship between drying time (of beef), relative humidity, airflow and temperature?

Relative humidity is the ratio of the vapour pressure of water present to the vapour pressure of air that is fully saturated (RH100%) at given temperatures. More commonly in food applications, it is expressed as grams of water per kilogram or gram of air at given temperature. The moisture carrying capacity of air increases with increasing in temperature - warmer saturated air would contain more water than cooler air, ex. 1 kg air RH70% @20C contains more moisture than 1 kg air RH70% @5C. The opposite is true as well - the warmer air can pick up more water to reach saturation than cooler air. 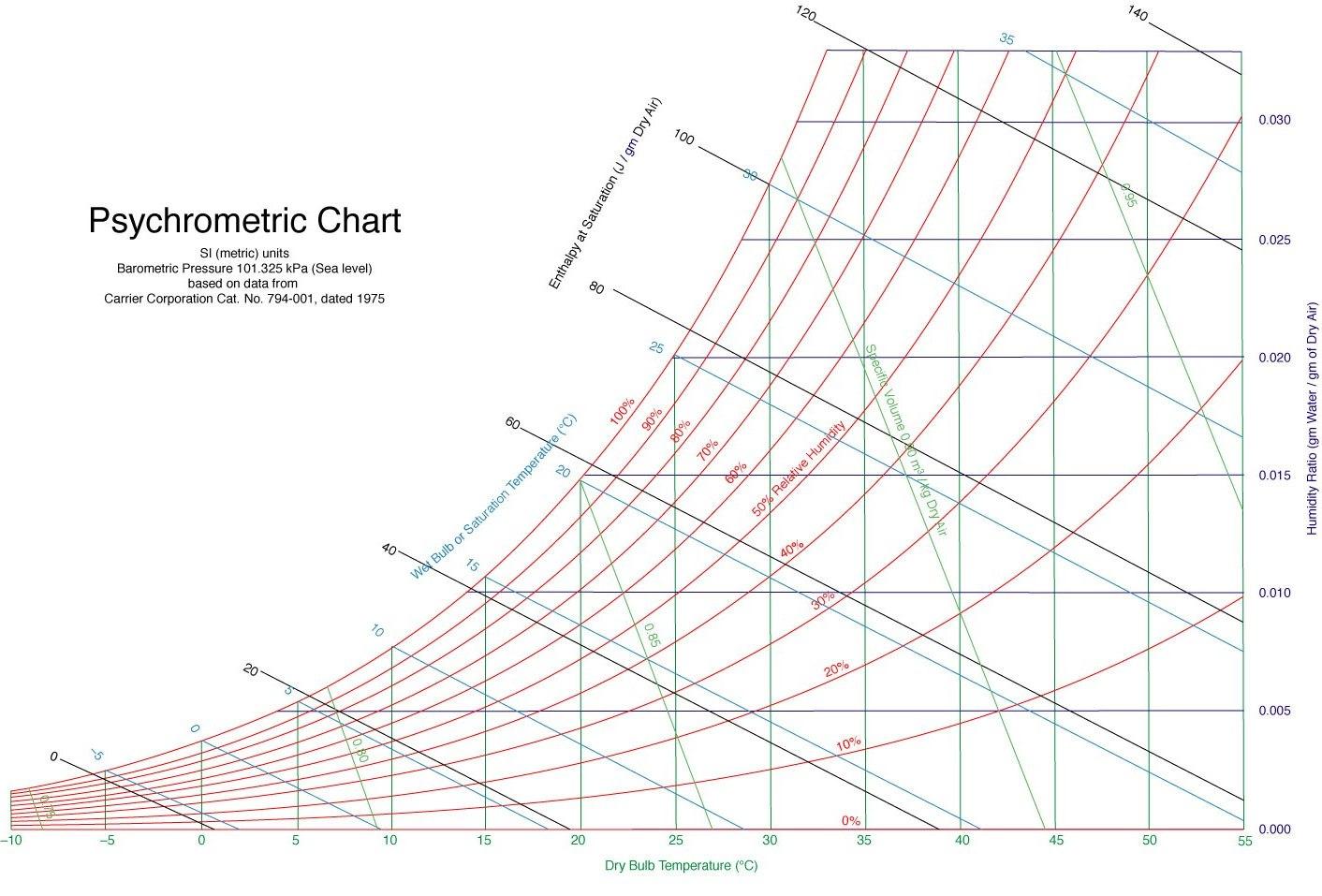 Psychrometric chart published by the University of Kentucky. https://afs.ca.uky.edu/poultry/chapter-7-relationship-between-temperature-and-moisture 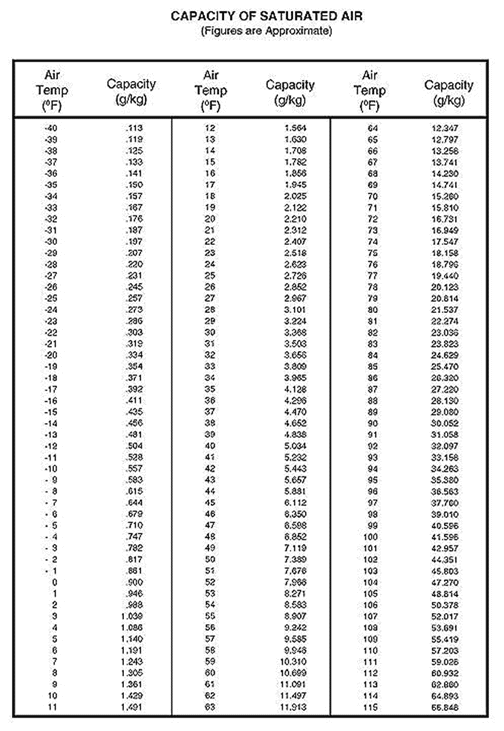 Dehydration of meats and all foods in general is based on moisture gradients and the diffusion of water from the food surface to unsaturated air, and from inner high moisture areas to outer low moisture areas within the food. The surface layer is typically treated as an area of RH100% where water vapour is constantly released to the surrounding environment, and higher surface area increases drying rate.

Drying and internal water movement can be roughly broken down into two phases based on how strongly water interacts with components of the food:

Dehydration proceeds until usually one of 2 scenarios:

The second scenario is the desired endpoint for dehydration, and final relative humidity typically determines texture. A small portion of water is very tightly bound in the food and cannot be removed using only air and moisture gradients; for beef, this occurs around equilibrium surface RH10%, though at this point the texture will be similar to a solid block of bonito.

A greater gradient between food and environment (ex. food RH100% @10C, air RH5% 120C) will drive faster dehydration, but increases the likelihood of case hardening - surface dries too quickly to be rewetted by internal moisture migration, and becomes impermeable to moisture. On a side note, the forming of a pellicle in dry aging of meats is a form of case hardening and is desired under proper conditions.

Drying time is determined by the moisture movement rate, which can be calculated with the above information regarding surface area, temperature, relative humidity of food and air, and air mass flow rate.

2. Is there a recommended temperature, humidity and airflow for drying beef?

The US Food Safety and Inspection Service (FSIS) provides guidelines and rationale for pathogen reduction using a combination of heat and high humidity. This is counterproductive to the traditional low-temperature method for biltong. Alternative methods to achieve lethality are acceptable with scientific research validation - more on this after the questions. Airflow in most commercial settings is not considered as dehydration equipment at that scale target constant or decreasing RH.

In general, FSIS recommends achieving a minimum internal meat temperature of 145F (~63C) held for 4 minutes, and a 1 hour hold at RH90% to ensure sufficient delivery of thermal energy to the surface. This time-temperature lethality process targets a 5-log reduction in the most thermally resistant pathogen, Salmonella spp. 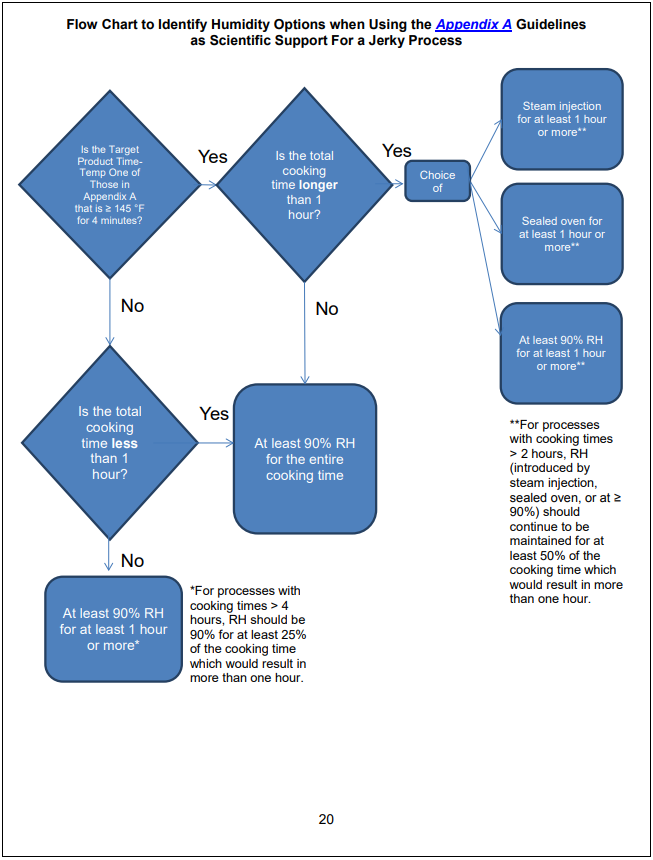 3. Which environmental condition(s) is most important for drying beef, and why? For example, should i only be concerned about controlling RH or RH and temperature combined etc?

Both temperature and RH are important due to their relation in moisture holding capacity described above.

This results in an approximately 50% higher drying rate at 23C vs 18C given the same mass airflow.

4. My understanding of the driers is that the heater is there to increase the temperature of the air and reduce its density and thus RH of the air. I assume the fans only function is to remove the air that has taken on some of the moisture from the meat - is this correct or does this serve another function?

From answer 1, the fans generate airflow to remove moisture-saturated air. In your circumstances, airflow can also affect drying rate - halving or doubling the airflow will halve or double the the rates in answer 3.

Additionally, proper fan placement and flow direction is needed to avoid having areas with stagnant saturated air. Ideally, an additional internal fan directed at the meat should be used to generate turbulent flow around the pieces and minimize the boundary layer effect.

References (not cited above) and additional reading:

An Introduction to the Dehydration and Drying of Fruits and Vegetables. Donald G. Mercer, Ph.D., P.Eng., FIAFoST. https://www.uoguelph.ca/foodscience/sites/default/files/Drying-Part%201.pdf

Humidity needs to be controlled to avoid mold growth. In the Highveldt where biltong originated from humidity was never much of a problem because of the arid, dry winters. You would be better served to control the humidity. Certain hams are dried for well over a year and dry in both winter and summer, but are hanged in areas where humidity is naturally low.

Meat drying is often done to cured meats. Not all cured meats are dried, but some are. Curing of meat dehydrates the meat to the point were spoilage bacteria cannot thrive. This is usually done with salt or sugar. This was traditionally done as a preservation technique, but these days it is done for taste. Charcuterie is the term in French for these meat crafts.

And just btw when you cure meat it stops being raw, cured meat may not be cooked, but it is not raw. You can have the wettest piece of biltong ever but if it is cured properly it is not raw.

7
How to dry homemade pork sausages with proper humidity and temperature?
5
Is there a general algorithm for calculating the amount of time to roast meat?
2
Can thawing meat too quickly affect its quality?
3
Drying fatty meat in food dehydrator - is it okay for short time consumption?
1
Is there any way for me to reheat mini beef wellingtons without toughening the meat?
2
What cuts of meat are preferable when you want to avoid drying out?
2
Can dry aging beef and curing/fermenting/drying meat be done in same environment?
1
How are commercially dried cranberries dried?
0
How to prevent beef muscle meat losing water during storage in the refridgerator?