After my pizza preparation, from a dough that has spent already a night in the fridge, I always leave about 200g of dough to make a small white pizza to accompany my meal on the day after my pizza night. So I have this 200g piece that has spent 48h in the fridge and that I take out, fold on itself several times to make a ball let it proof again for some hours at room temperature in a greased covered plastic container. Then at baking time, I spread the dough on a bed of semolina flour, trasfer it on a hot cast iron pan and let the bottom cook. After some minutes I sprinkle some oil and salt on the top and finish it under the grill for other few minutes. This is the outcome: soft and nice in the center. 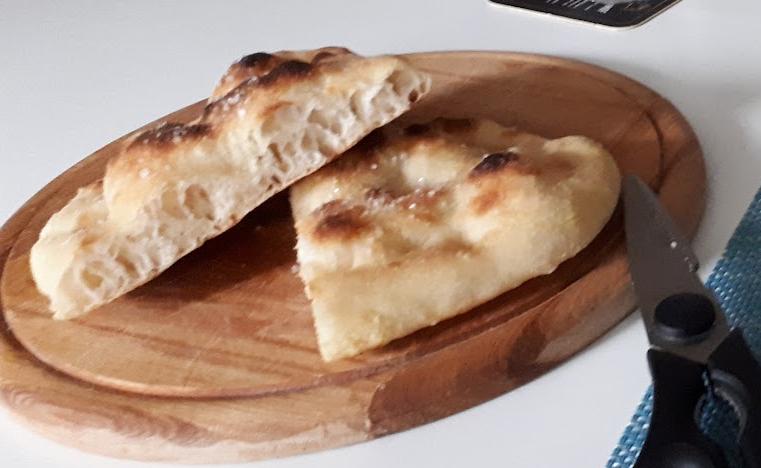 This time I tried to skip the container part and let it proof on a bed of semolina flour covered with just an upside-down bowl. Same baking process but without salt and oil on top. This was the outcome: 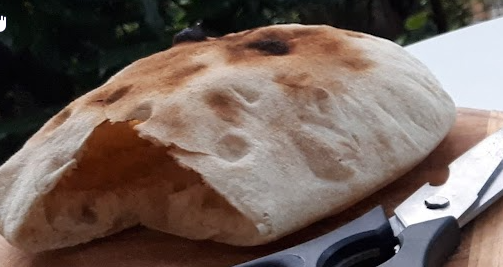 Can this be due to the fact that during proofing, in the second case, the dough dried out a bit not being in an air-tight container?

I do no think that this balloon-like effect is due to the lack of "weight" on the surface (no oil and salt). Sometimes I do omit the topping on the air-tight proofed dough as well and it develops more, but never to become a "balloon" this big.

I wouldn't seek the reason in the proofing cover. People cover the dough with a simple towel, or not at all, without too many problems. Also, it seems that you are talking about covering during the second rise, and not about the third rise (after shaping) - any suggestions that drying out promotes a huge pocked under the crust assume that it dried out in its final shape.

Your problem is much more likely to stem from incorrect proofing, possibly overproofing. Since you are using a portion of the dough the same day, you probably have too much yeast for 48 hours of retarding.

Together with your baking method (stovetop first), it is no wonder you are getting this air pocket - in fact, this method is the one used where the pocket is intended, such as pita.

Not the answer you're looking for? Browse other questions tagged baking bread dough pizza proofing or ask your own question.

30
What should I cover bread dough with while it's rising?
5
How to cleanly cover the dough while it rise?
4
Bread crust separated from interior

5
Does it matter if I freeze dough before proofing?
1
Dough safety and viability after overproofing
4
How to store bread dough in the fridge for proofing?
3
What is the purpose of proofing dough in several stages
2
Pizza dough dipping in middle during proofing
0
How long can you keep pizza dough in the fridge?
1
Pizza bulk fermentation vs proofing (2nd cycle)
2
Overworking bread dough by hand
0
container for bulk fermentation/proofing
1
Using over-rested pizza dough as old dough