Why did my fruit tart cream/custard have spots in it?

I just made a fruit tart for the first time in my life. I searched for fruit tart recipes and I decided to use a 5-star recipe with the most ratings to try to minimize the possibility that anything would go wrong.

The recipe says the following for the cream/custard filling:

The only thing I did differently from the recipe was to not include the 1/2 vanilla bean in Step 1. Instead, while stirring in the butter in Step 4, I also added 1/2 tbsp of vanilla extract. Besides that, I followed exactly what the recipe said to do. 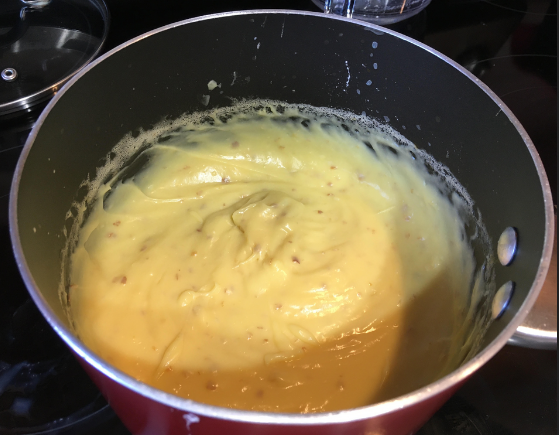 Also, during Step 4, the cream/custard turned very thick very quickly, and I couldn't pour it out of the saucepan like the recipe mentioned. Instead I had to spoon it out into a bowl. So I guess I messed up the consistency, although the final result wasn't bad and seemed to taste fine.

So what caused all of those spots to appear in the cream/custard?

The spots are burnt cornstarch. It created a browned layer on the bottom, which you tore up with the whisk and incorporated into the custard.

The reasons for this are:

Of the three, the first is the one most people underestimate. From the moment the starch gets inside, you should never stop stirring, making sure that you are touching the bottom. In fact, a flat-bottomed spatula is better than a whisk, to make sure that you are really moving the lowest layer away from the bottom consistently.

I am not sure if you really messed up the consistency. There are custards with different thickness, and being pourable when hot is not any special sign of quality. If you are happy with the final thickness (when the tart has cooled), keep it as-is. If it is too firm for you, reduce the amount of cornstarch next time.

Not the answer you're looking for? Browse other questions tagged cream custard tart or ask your own question.

6
Does Julia Child's Crème Brûlée work?
3
My butterscotch pie filling curdled?
3
Why is my pastry cream (custard) grainy?
4
Why does my lemon tart filling sometimes curdle?
3
heavy cream and half-and-half substitute
4
How to make a custard (royale) that sets up firm on the stovetop?
8
Why is there a 2 step heating process for making custard for ice cream
3
Why is my custard eggy?
4
creme patissiere too solid
4
Why does this custard say to boil milk cool and boil again