What can I call this Swiss Chard side dish exactly in a menu?

What can I call this side dish (I have to write it on a restaurant menu)? I have already written "cooked swiss chard" but I think it is not the exact definition. It is a mix of herbs that grow spontaneously on the fields, are then cooked and sautéed in a pan with oil, garlic and chilli. In Italian they are called "field herbs". 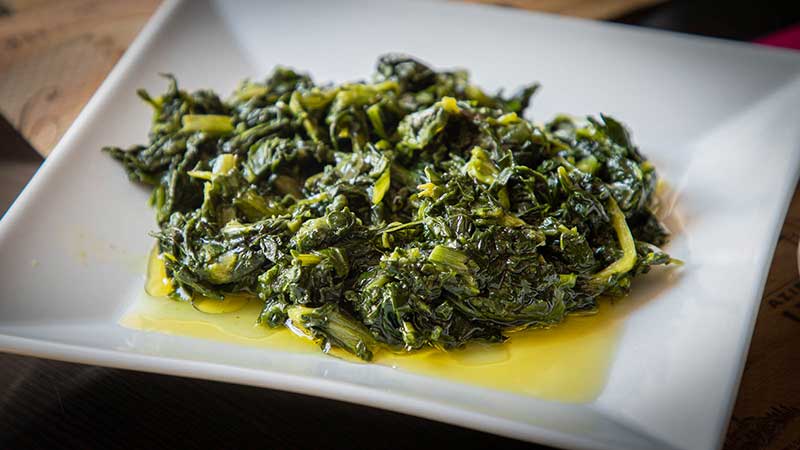 In the U.S., we would call usually these greens and not herbs. So why not use "sauteed field greens" or "sauteed wild greens"?

You should use a word like sautéed to indicate that they are cooked, because otherwise people will expect a salad.

If the menu actually provides descriptions of dishes, then I would just use the Italian name and describe it in English. This is very normal at least in the US for dishes from international cuisine, and even many ‘local’ dishes here in the US have associated descriptions on their menus unless they are something truly trivial and universally recognizable (and even then, they may still have such descriptions, a ‘cheeseburger’ sounds simple, but there’s enough variety that most places will explicitly list the toppings and the size of the patty)

Barring that possibility, I would go with the admittedly somewhat long ‘Field greens sautéed with garlic and chilli flakes.’. My reasoning here is as follows:

Why not "herbe di campo?" If it has to be in English, "sauteed wild herbs" can also work...or "sauteed herbs." Much of this depends on the context of how the rest of the menu is written.

Are you the chef? If not, have you asked the chef. I would call this dish "Seasoned Field Greens."