Why does mixing the salt and yeast sometimes work?

I've always learned that DO NOT mix salt with yeast. Because the salt kills the yeast, and the sugar actually helps. You should always put the salt.

So what is the "magic" of this recipe (Classic Challah Recipe) that they mix altogether? How does it actually work?

A long time ago I saw a video of someone doing a pizza dough that they just put the salt and yeast in two different parts of the bowl, so when it's mixed there is a low probability that will get together.

It doesn't work "sometimes", it works pretty much always. People are just being sloppy when they say "salt kills the yeast".

Certain levels of salt inhibit the yeast, so that it multiplies less, or slower. If you have an old or improperly stored package of yeast, or you are working with a strain which is not very resilient, then the negative effect may be enough that you don't get a healthy growth process established, and the dough doesn't rise at all. But it is a matter of probabilities, not of certainty.

So there is no reason for a recipe with a direct exposure of yeast to high salt concentration to not work, especially with today's modern, carefully engineered yeast supply. It just has a higher chance of failing when compared to recipes where the salt is added at a different step.

The recipe you linked is also not in any way critical. There you disperse both the dry yeast and the salt with the flour, and by the time you have added the wet ingredients and the yeast wakes up, the salt concentration is as low as it is ever going to be. The finicky recipes are the ones which ask you to bloom the yeast with a teaspoon of salt and teaspoon of sugar in a small amount of water, for example, or prescribe a different high-salt preferment method.

The vast majority of bread machine recipes add the salt and the yeast to the pan at the same time but not touching, then mix.

The recipes for mine all add salt (& sugar) to water, then flour, with yeast at the top. By the time the yeast gets wet, the water is uniformly salty.

What you do need to avoid (in general) is mixing dry salt and dry yeast, then getting them wet. Then you're trying to rehydrate the yeast with really very salty water. Even then, the overall effect is more likely to be a slowing down than killing all your yeast, but if you're working to time (or a machine is) that's a problem.

As mentioned a lot of the impact of salt depends on the concentration of salt.

To illustrate consider this graph 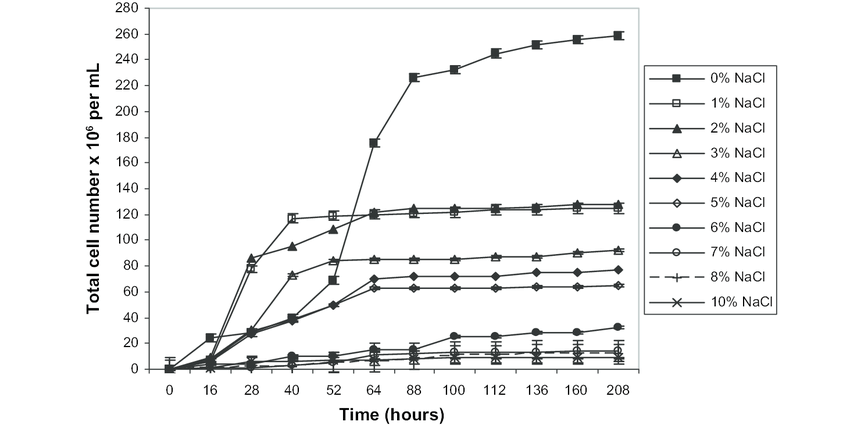 Its not great for seeing effects at the time periods we would be considering for rising but makes the point that increasing amounts of salt inhibit maximal growth. However, the amounts that have profound effects are at levels of salt that are unpalatable: most bread recipes end up around 1% final salt concentration; 5% would be incredibly salty when you consider that things like Vegemite and the like are about 3% salt concentration.

Not the answer you're looking for? Browse other questions tagged bread food-science salt yeast or ask your own question.

6
How should I adapt a recipe if using very new dried yeast versus slightly older dried yeast?
10
How to convert a recipe calling for active dry yeast into rapid rise yeast?
15
What is "pizza crust yeast"?
4
When making bread, should I add salt early or late? Pros and cons
3
Does dead yeast result in a stickier dough?
1
Why do chefs in cooking shows not always seem to do things the "right" way?
10
Why does this recipe call for so much yeast?
1
mixing dry yeast, water, salt and flour
1
How to obtain the soft and pillowy texture in bread?