I want to use hummus in a catering product, but I noticed it changes colors when left out for too long. The problem is that it needs to look appealing for a few hours.

Do you have any tips on how to make hummus look fresh for longer?

Sure, a few tips below. Note that you're not going to be able to keep it from drying/darkening entirely; the below is intended to keep it as appetizing as possible despite this.

If folks are going to be serving themselves, after which the hummus will sit out for a while, you can take either of these additional steps:

I am here assuming that browning of hummus is from polyphenol oxidase, the same as for apples, taro, peaches and other fruit / vegetable products. I could not find anything to specifically say this was so but it makes sense.

If that is the case then there are two tricks you might try, both of which will be fine for consistency and flavor.

This is an old trick for apple slices. The citric acid is an antioxidant. Lemon juice is often in hummus anyway. Some lemon juice squeezed over the top before it is set out will reduce oxidation.

In this study they heated onions at 100C and studied its ability to inhibit polyphenol oxidase (in taro and potatoes). Longer heat = more inhibition when extract was applied. Below graph from publication. 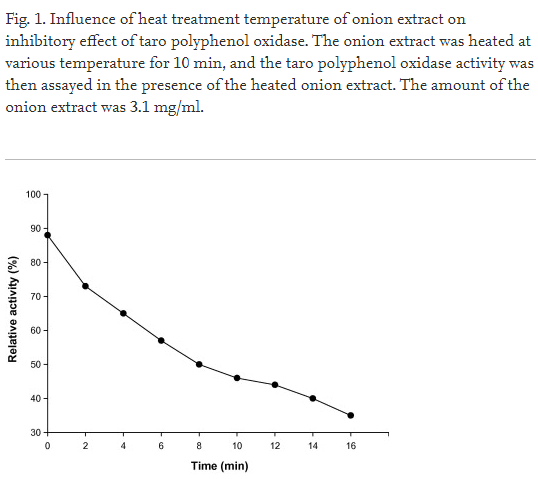 I propose that you could accomplish this effect for your hummus by boiling an onion, slicing it and setting a slice flat atop each bowl of hummus. For one the physical slice will occlude the hummus below from air. For two you will get the onion thiol compounds diffusing out into the hummus and serving as antioxidants. For 3 if some onion flavor gets into the hummus, onion flavor in hummus is good. For 4 this will look pretty especially if you use a red onion and drop a few pieces of parsley on top.

And if someone is hungry for the onion they can eat it! I would.

1
How to make Hummus that doesn't have a hardened layer?

5
Is there a way to freeze herbs without losing freshness?
1
Why did my hummus go bad?
3
Do you peel garbanzo beans for hummus?
1
How to make Hummus that doesn't have a hardened layer?
1
Why do my mung beans turn from green to dark brown in a rice cooker?
1
Storing Self-Made Cookies/Brittles/etc longer: ingredients and techniques
16
Why did this gallon of milk stay fresh for so long?