Deidre's bread getting HUGE in the oven

I have made Deidre's Ultimate Keto Bread 2.0 for years with generally consistent results (though a bit uneven on the top). I made a couple minor tweaks recently, and the last 2 batches have risen properly, but got ENORMOUS in the oven (see photo)! Then they collapsed while cooling, making a weird and dense inside. There was no giant air bubble - just huge. I know if it works, don't fix it, so why I am tweaking it, but I was hoping to get the top to rise a bit more evenly. Here were the tweaks:

Any thoughts on which of these tweaks may have caused it to expand so much during baking, and collapse? Could the rolling up of the dough make such a difference? Did I need to knead longer? (NSGod - Once I figure this out, I plan to try your updated version with the increased dry ingredients. Thanks for your experimentation toward perfection.)

Instructions 1. Proof yeast in honey and warm water; mix all with paddle attachment 3-5 min, then dough hook for 5-10 min. 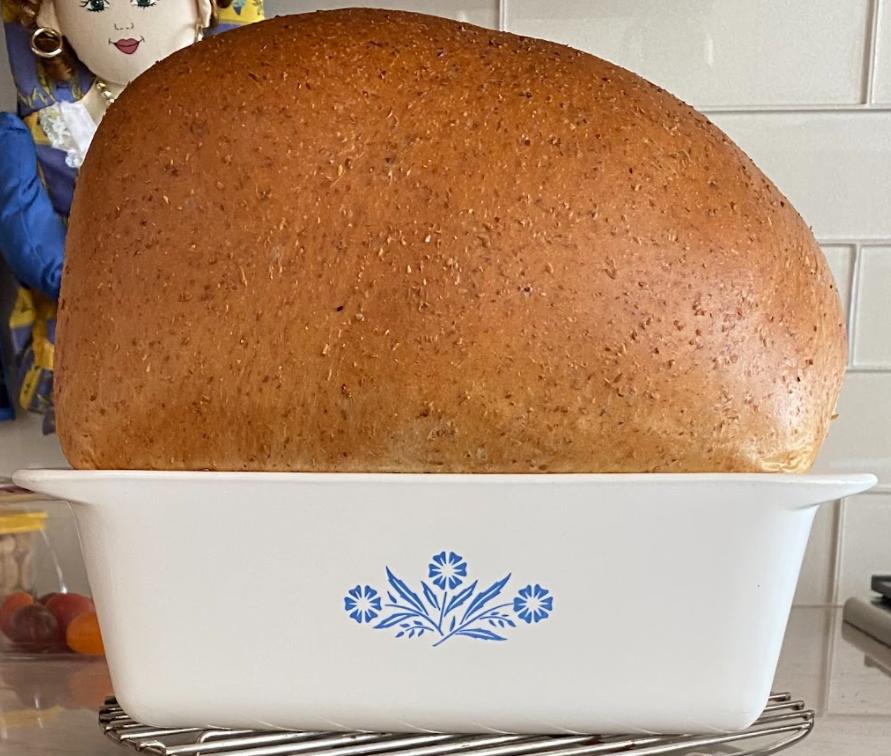 Well, I have good news and bad news. I attempted a ½ size test loaf using my 1st recommended recipe below. The bad news is I had the exact same problem as the OP did. The good news is that now that I can reproduce the problem, I can better reason what might be happening. I will leave the answer and update it as I continue to make tests.

I've had this happen before myself, from time to time. After doing some testing, I’ve come up with some recommended changes to the recipe.

TL/DR: The primary cause for the great expansion during baking and collapse afterwards is a combination of excess amounts of water, honey, and yeast. The biggest contributor was the amount of water, with the other 2 less so. I arrived at this answer by first inadvertently reproducing the problem the OP had, and then tested several variations until I came up with the desired result.

Before I get to that answer, however, a bit about how this recipe works: vital wheat gluten mixed with water makes a virtually solid rubbery mass. It is highly elastic. If you managed to trap air in that water + vital wheat gluten mix, and applied heat to it, the air and moisture would expand and it would blow up like a balloon. Once you remove the heat, however, it will deflate just like a balloon will. Pure VWG won’t expand and then hold its shape. That sounds a bit like what might be happening in your case.

So, what happens in a “normal” wheat flour bread recipe during baking: can it expand and collapse like this? To be honest, I’m not sure, and hopefully some more experienced traditional bakers can help fill in the gaps. That said, here’s how I imagine that it works. In a regular wheat flour bread recipe there's not nearly as much gluten, and it's also not nearly as fully developed and elastic as VWG is. In addition, there are starches that "set" and help the bread hold its expanded shape.

In order to accomplish the same effect, Deidre’s recipe works by adding 2 important ingredients to function as flour along with the VWG: oat fiber and flaxseed meal. Oat fiber is a pure insoluble fiber that interferes with the gluten networks by getting between the VWG particles, thereby preventing cross-linking. This allows for air holes to develop during fermentation and baking. Unlike vital wheat gluten, oat fiber has no structure building characteristics at all: it’s simply a filler. In contrast to vital wheat gluten, which tends to want to hold onto moisture during baking, oat fiber has a neutral effect on the water-retaining characteristics of the dough: it neither retains moisture, nor acts as a drying agent. Flaxseed meal contains soluble fiber in the form of a mucilage network that can be woven in between the gluten network to help open up the crumb somewhat. Flaxseed meal does have gelling structure-building characteristics, but it also has a tendency to want to hold onto moisture. So, while the oat fiber and flaxseed meal help tame the elasticity of the vital wheat gluten somewhat, they don’t add any “setting” ability. The recipe does include 2 eggs which, while providing moisture, also act as structure builders and drying agents (particularly the egg white proteins). They do aid a bit in helping the bread to “set” during baking.

Given those thoughts, I do have some suggested modifications to the recipe to try. First, I'd lose the xanthan gum, as it inhibits gluten development and results in a tighter crumb. While the oat fiber and flaxseed also do this, by eliminating the xanthan as a variable, it can make reasoning about what’s happening a bit easier. I also noticed that your vital wheat gluten % is a tad high. That, and not enough oat fiber could potentially cause the loaf to be too elastic, especially when mixed in a stand mixer. I try to keep the weight of the oat fiber about equal to the weight of the flaxseed meal. If you’re having issues with it blowing up and collapsing, I’d probably lower the vital wheat gluten proportion down to around 46% rather than 51%. (Increasing the amount of oat fiber can cause taste to suffer, so you may want to add a Tbsp or so of a keto sweetener to offset that).

My original recommended recipe following the advice in the previous paragraph (which actually ended up producing results similar to OP):

This dough was extremely wet, and as such, expanded greatly during baking. While this recipe has a hydration rate (ratio of the weight of moisture to the weight of the flour) of around 99%, I’ve found that the bare minimum amount needed for the dough to come together is in the low 80% range. This overly wet dough was providing extra lift in the form of moisture turning to steam to push things outward. Forgive the bad focus, but you can see from the image below what happened after baking: 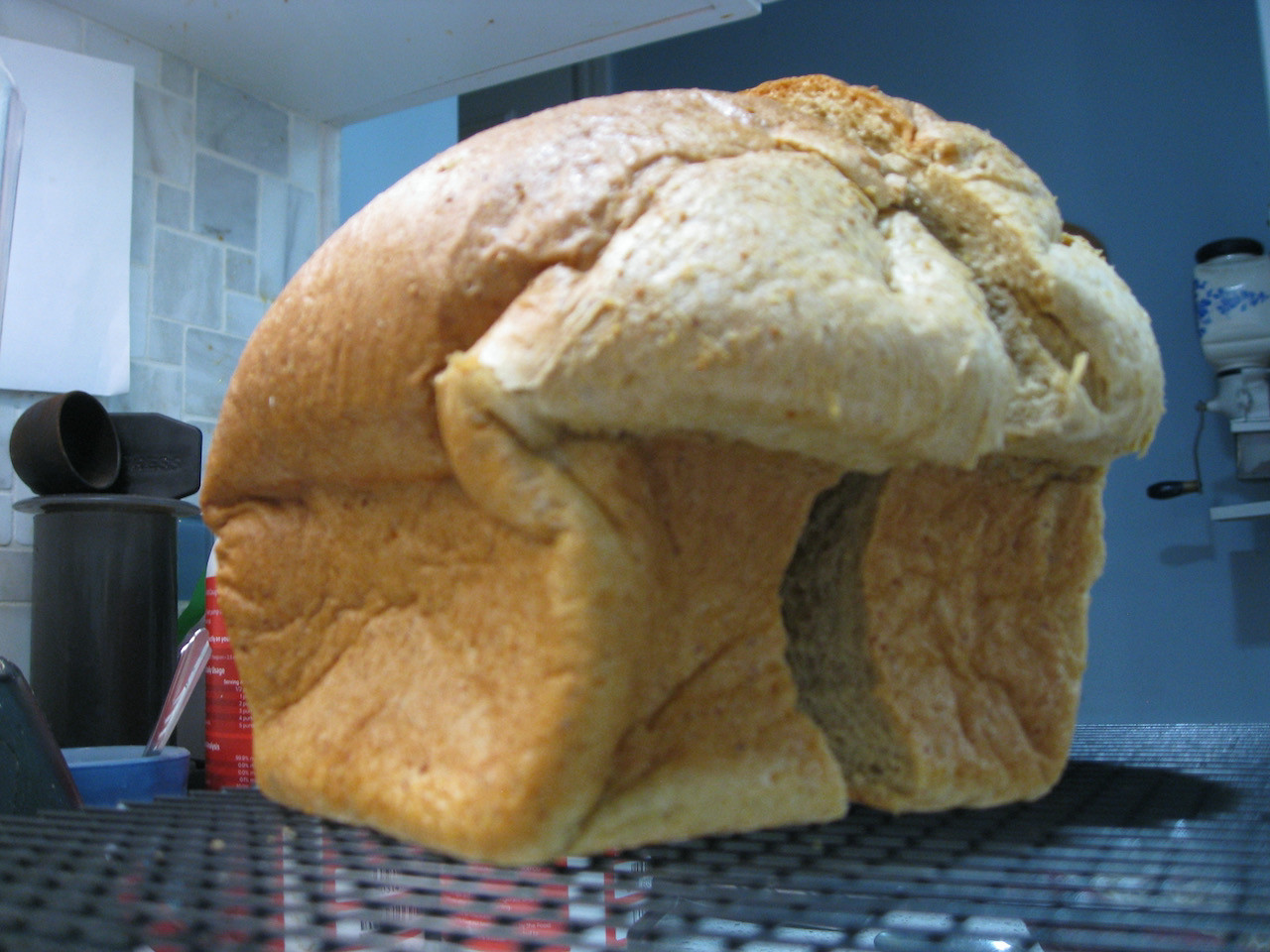 After baking and while cooling, the sides of the loaf were almost sucked back in towards the center. During baking all that extra moisture turned to steam and expanded the bread outward, but as soon as that source of heat was removed, the excess water cooled and created a vacuum and started to collapse the loaf. Because the crumb was so overly open as well, it doesn’t have much structure to resist the forces.

While I immediately dismissed the amount of honey (sole source of food) and yeast as a contributing factor, I definitely think this is also part of the problem. So, did Deidre’s recipe just call for a ridiculously high amount of yeast? Not necessarily. The performance of this bread depends greatly on how well the dough is mixed and kneaded. I think with an undermixed loaf and higher amount of yeast, you could probably create the equivalent of a fully mixed loaf and a lower amount of yeast. In the former’s case, much of the extra gas produced would simply escape out of the loaf during proofing and baking. Based on how well I mixed the dough and how well you mixed the dough (and the roll-up method you used), the amount of yeast likely needs an adjustment.

So, here is final revised recipe:

You’ll notice that I ended up reducing the water from around 99% to 88%, the amount of yeast from 2.46% to 0.95%, and the amount of honey from 2.22% to 1.27%. I mixed this just like the others, first with the paddle attachment, then with the dough hook, then by hand for a couple minutes until I could tell it was ready. I placed it in the loaf pan and allowed it to rise (I take a large bowl, lay a heating pad in it, then set the loaf pan on top of that, then cover it all with saran wrap and a towel). I place it on low heat or medium if I'm in a hurry. I let it rise for about an hour or so, until it was at the top of the pan. With this final loaf, I decided to slash the top of the loaf before baking. While normally this is a way to help allow for maximum expansion during baking, it's possible it had the opposite effect for our loaf. In any case it only rose about another inch or so during baking.

This resulted in a loaf that didn’t cave in after removing from the oven: 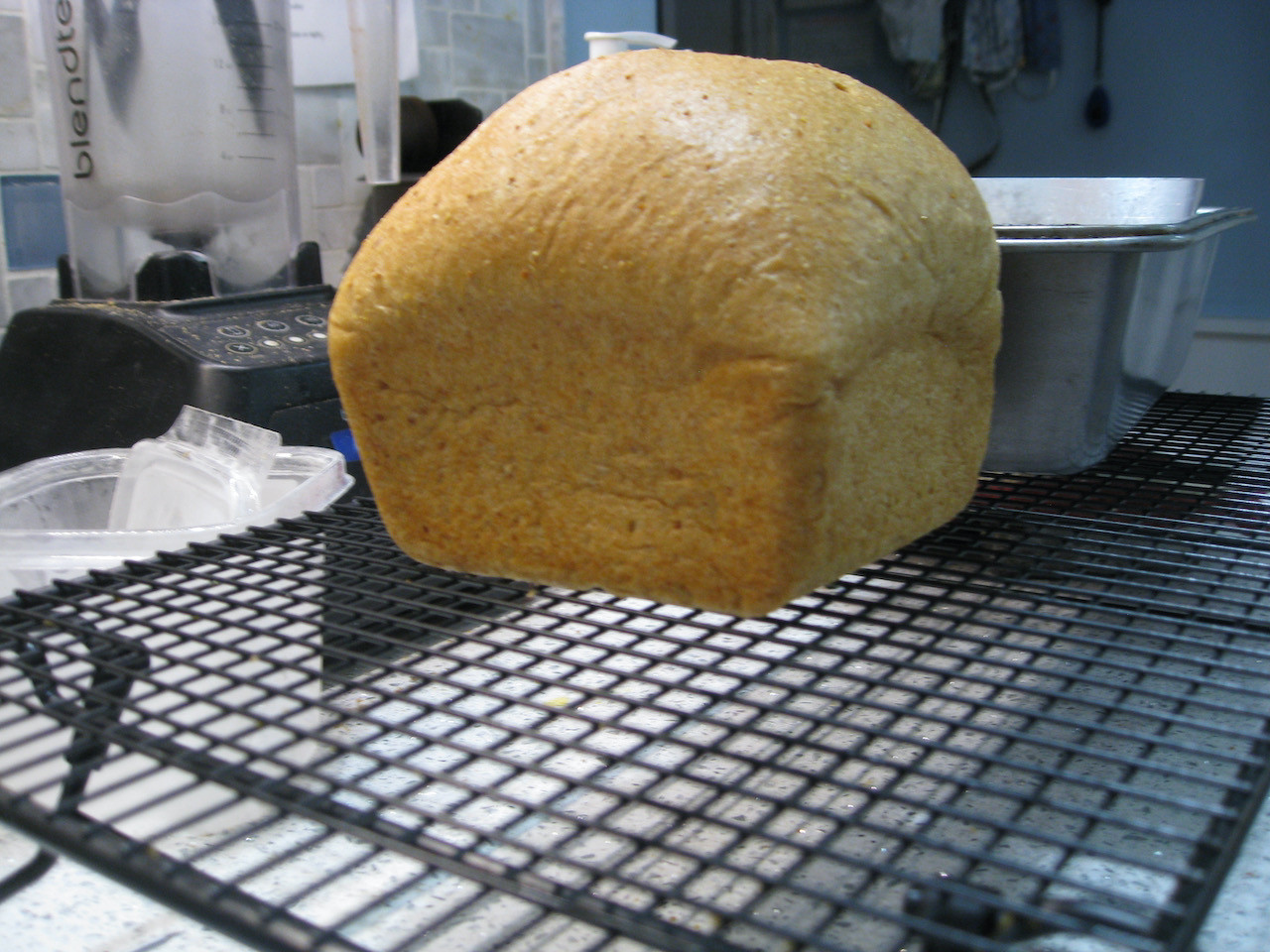 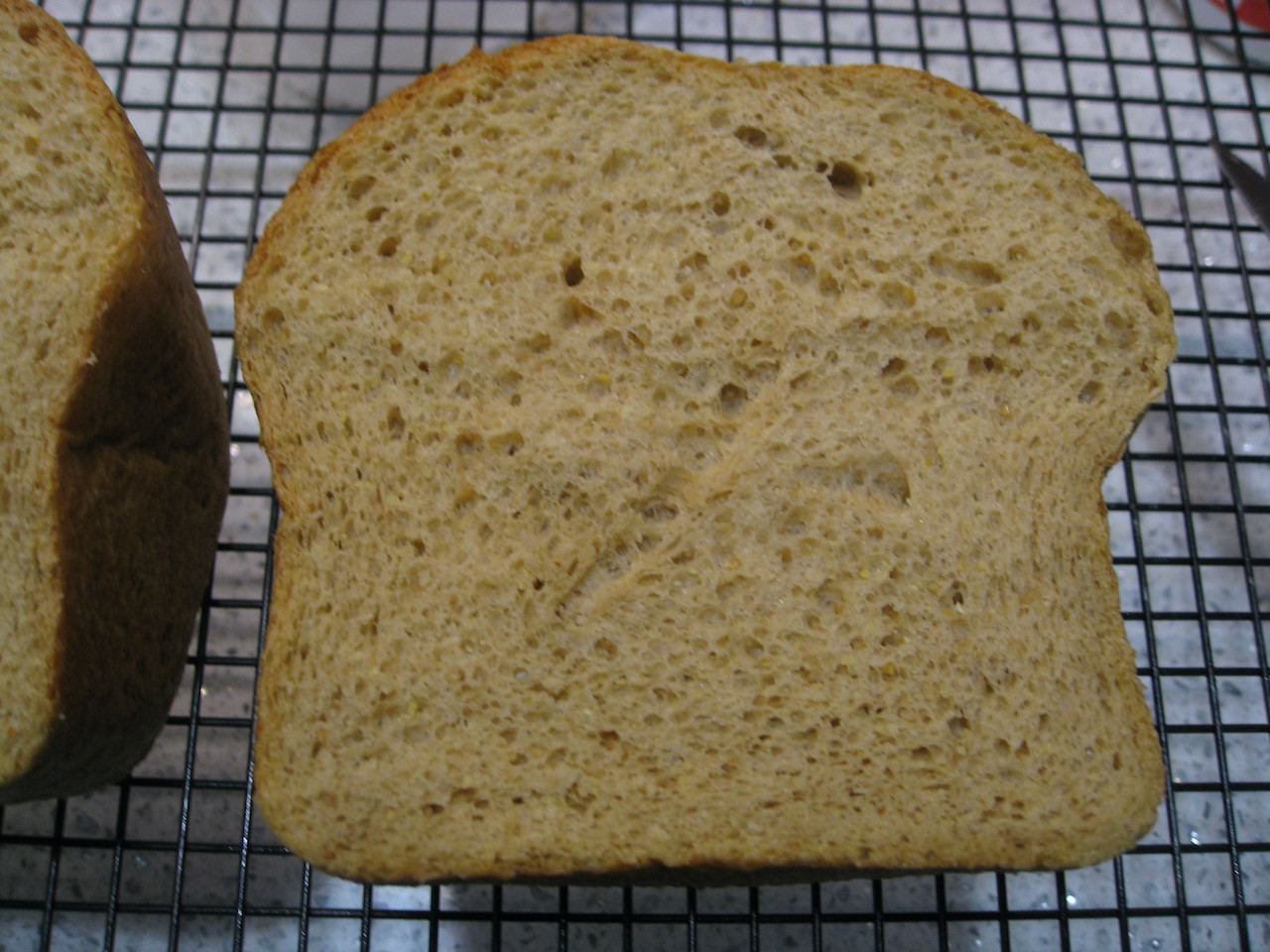 I'm gonna guess since its bread there is yeast? Cutting on that might cut the rise since it usually is the major factor of the rise.

Yeast often reacts differently depending on its health simply the humidity and heat of your kitchen.

So if you dont mind doing a little bit of trials, I'd say redo the recipe, but only with 3/4 of the yeast it asks for. It should rise less.

Not the answer you're looking for? Browse other questions tagged baking bread low-carb keto or ask your own question.

6
How do you significantly reduce the calories in bread like Franz Keto bread?

1
Why did my French bread neither rise nor bake properly?
2
How is it that brioche rises so high?
13
I want to duplicate my bread mistake!
4
Why won't my bread rise much during baking?
5
Forgot the yeast in a brioche bread recipe
2
Is there a way to make this bread recipe's crust less crunchy?
2
Why did my bread bake on the top like spongs and higher than the bucket in the bread maker?
1
Why was my bread mix really dry and take ages to knead properly?
2
Keto King Bread Rise Problem
4
Bread dough flattens during final proof & almost no oven spring