Can I fry food with solely essential lemon oil?

Is it safe to consume lemon oil in the quantities that would be found in fried food? Could I fry corn tortillas, for instance? Would it fry?

It would be dangerous to attempt to fry in lemon oil

Note that the "flash point" is the temperature where flames & active combustion take place. This is generally a good bit above the usual "smoke point" which is used to rank cooking oils. The flash point is the more dangerous temperature, as it equates to fire.

This limits the feasibility of doing any cooking in citrus oils, due to their flammability. The high limonene content would render lemon oil to be a fire hazard well below "frying" temperatures. If you've ever seen a flamed citrus peel used as a cocktail garnish, you would have witnessed the flammability of citrus oils.

The blue 2 indicates a health risk:

As mentioned in another answer, even if flammability wasn't an issue, this could be dangerous. Contact with the skin can cause a rash ("contact dermatitis" if you're being technical about it) in certain cases.

Even if it didn't burn at such a low temperature, the quantity of limonene needed for cooking, and the direct contact with your mouth while eating would result in a potentially dangerous situation.

Small amounts are considered safe for consumption (and even used in supplements), but any significant quantity of lemon oil should not be consumed directly.

Lemon essential oil is composed primarily of limonene. Limonene is a skin irritant at high concentration, so you wouldn't want to put it in your mouth. Limonene is also volatile enough to limit its use as a frying medium, and the vapor would cause severe lung irritation.

It would perhaps make more sense to add a bit of lemon oil to your frying oil, but again, it's a fairly volatile oil, so it would be better to add it after frying.

Essential oils are toxic in larger quantities. This is simply the first google hit. A few milliliters can seriously harm small children; there have been deaths from larger amounts given to little children by misguided parents.

An adult will not die as quickly but a few milliliters more may require a visit to a doctor or hospital.

In addition to the idea being unhealthy and a fire hazard (both properly discussed in the other answers), there is one more consideration:

In order to fry something, the oil has to be way hotter than the boiling water temperature (e.g. 250-300 deg C) and still safely below the oil's own boiling point.

Lemon oil will boil below 170 deg C and you don't have a temperature interval usable for frying.

edit: I solved it!

The ordinary cooking practice is yet to employ the reflux condensers, but we can borrow them from an adjacent field - the organic chemistry lab practice: 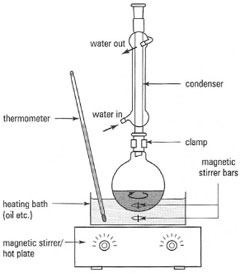 The oil bath in the picture is important - a direct heating will enable some parts of the container to reach the self-ignition temperature of the lemon oil.

The internal magnetic bar will rather not be needed.

Well, the result will be still not tasty nor even safe to eat, but this is out of the scope of the question.

The earlier answers have all contributed a great perspective on why its not safe nor feasible to fry anything in lemon oil itself.

Lemon oil, and most citrus oils in general, are obtained from the peel of the fruits. This is usually done in a cold-pressed manner ie. (squeezing the peel to release the oils contained in glands within the peel). The oil is highly concentrated and not suitable for direct use in cooking.

I understand that the initial premise of your question is that you are trying to find a way to infuse the flavor of lemon oil into a food item through frying that food item in the oil.

What I think might work well for your application eg. deep frying tortillas, is to use a food grade oil soluble lemon oil flavoring such as this one. You can prepare a pot of neutral oil, such as canola oil, and to that neutral oil, add however many drops of the oil flavoring to your desired strength.

Frying with this flavored oil should infuse the flavor into the tortillas pretty well. You need not be concerned about toxicity of flammability here, because the oil that is doing the cooking is the neutral [canola] oil itself. Just adding those few drops of the lemon oil flavoring would hardly alter the physical or chemical properties of the frying oil overall, due to its extremely small dosage quantity.

If you do manage to give this a go, I would be curious to hear results!

Not the answer you're looking for? Browse other questions tagged frying lemon or ask your own question.

3
Why does food cooked with peanut oil stick less than food cooked with sunflower oil?
8
Why does my olive oil smoke/burn when I fry with it?
3
Why does oil bubble when you fry things?
13
How can I make lemon and chilli liquid to have with hummus?
2
Making lemon oil from vodka
3
When is it better to fry with oil and when is it better to fry with butter?
10
Are paper kitchen towels food-safe?
28
Can I deep fry food in butter instead of vegetable oil?
1
Storing lemon juice with crushed mint