Do these lines in ceramic pie plate mean cracks?

Noticed a few spidery lines in this pie plate before using in the oven, then many more appeared after use. The glazing on the outside is still solid and smooth and the lines aren’t seen from the bottom. Is the plate going to crack apart? Still safe to use? 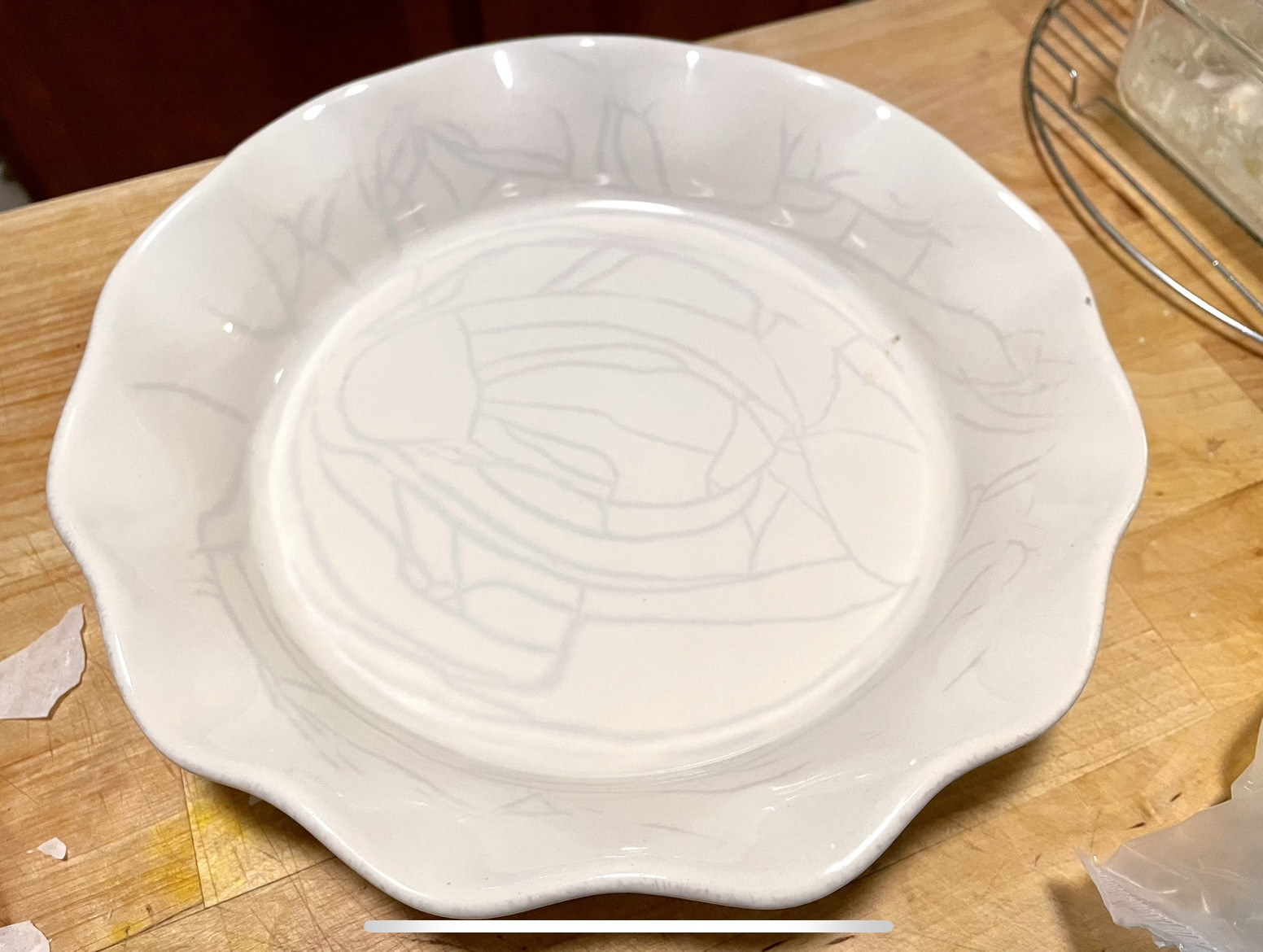 What you're seeing there is called "crazing". It happens because the glaze doesn't "fit" the underlying clay perfectly, and as a result it has hairline cracks all over the plate. This is very common with high-silica clear glazes, and pretty much universal with celedon. Those cracks were always there from when the plate was made, and you're just seeing them now because they got stuff into them (more on this below).

Surface crazing is generally considered harmless, except that it can lead to other problems in foodware. First, the crazing weakens the underlying clay, and can lead to cracking while in use. The second problem is that liquid from food can seep into those cracks, and into the clay body if it's porous even after firing (non-vitreous). Given the "bleed" you seem to be getting around the cracks where the plate has had pie in it, I'd be concerned about this. Bacteria can grow in those cracks and even in the clay body during storage, making the pie plate unsanitary, particularly if then used for low-temperature pies (like key lime).

So, this is a case of "use it if it's the only pie plate you have, but if you have others, switch to them".

That looks like simple crazing, which is common in china/ceramics. "Crazing" is literally just cracks in the glaze, so it's harmless by itself, and doesn't indicate deeper structural flaws.

It's caused by a few different things which ultimately come back to the glaze being under too much tension. This can be caused by extreme changes in temperature, like putting the dish in and taking it out of the oven. That can cause the outer glaze, which cools off more quickly, to contract more rapidly than the interior ceramic, and thus cracking. While that differential might seem negligible, the glaze is thin, and doesn't need a lot of tension to snap.

It's also possible for moisture from your pie to enter the glaze through tiny defects, some of which could have formed the last time you served directly from this dish, and the heat of the oven caused steam, pressure, and thus cracks, and looking at the pattern of cracks in your picture, this one would be my guess.

(And, to defend the honor of my 7th-grade science teacher, uneven heat can indeed cause parts of the glaze to expand, as well as any moisture hidden in existing cracks, making them more visible, while other parts do not expand as much. That's why you'll often have plastic dishes/cups crack going through the dishwasher if they aren't specifically labelled dishwasher safe, or you can explode some glass drinking glasses by pouring a hot drink in them. That said, looking at the pattern of cracks in your picture, that's probably not it.)

So, if the cracks/crazing became significantly worse after baking, I would avoid it. It's possible that dish was intended for display only, and wasn't actually designed to handle the stress of baking. A simpler glass or metal pie plate can be placed inside the larger dish to serve, which will make use of the decorative edge without further damaging the glazed dish.

Edit: To expand on the causes of crazing, and:

P.S. If the cracks become unpleasantly discolored in the future, fill or submerge the dish with a hydrogen peroxide (oxygen bleach) solution (the topical first aid stuff is fine), and let it soak somewhere dark and undisturbed for a week or three. That will safely bleach the stains if they're caused by bacteria. Do not ever use chlorine bleach, or you risk destroying your dish.

Not the answer you're looking for? Browse other questions tagged baking ceramic or ask your own question.

13
Advice for gingerbread houses?
8
How can I make my own small pie dishes and still cook pies effectively?
6
What does tin foil do when baking a pot pie?
2
Pyrex pie plate on hearthstone
2
Used Metal Knife on Aluminum Cake Pan, is it Ruined?
1
Pears caused uneven bake - how to stop this?
2
Parchment paper around a cheesecake?
1
Why does my cake lack air bubbles and looks like a molten mass?
2
Baking Bread in Dutch Oven with Hairline Crack