Could a pizza gas oven with only an under-the-stone burner work well?

I've been looking at options of for-home pizza gas ovens. The Ooni Koda stuff cost about twice than I'd like to spend, and even then I saw some YouTube review which showed it doesn't really get to stated temperatures after an entire hour.

So there's a cheap-ish used option of some rebranded Chinese-made oven, for whom I can't find any reviews. On the importer's website they claim it can reach 400-450 Celsius, that it is made of stainless steel, has 1 burner, a closable glass door and an adjustable chimney to contain or release heat. Stone size is about 13", and it should supposedly be able to cook the pizza in 90 seconds with a BTU of 13,000.

The seller said it has a burner only under the stone and said that after preheating it for 10-15 minutes it took between 120-150 seconds to cook the pizza. They only used it once "because their landlord decided he doesn't allow anything gas-operated in his apartment".

So you can see why I'm not sure if this oven form is problematic. Perhaps the upper heat would be too low, burning the underside of the pizza before the upperside is ready.

What are your thoughts?

EDIT: Image of the oven: Plus this product on Amazon seems kind of similar: https://www.amazon.com/Mont-Alpi-MAPZ-SS-Table-Stainless/dp/B018O164E2

Heat directly under the stone would not work for a Italian-style pizza oven.

Neapolitan pizza is cooked from the top down. In a traditional wood-fired oven, the air temperature is higher than the temperature of the brick or stone floor, and gets higher the closer you are to the top of the oven. Gas-fired pizza ovens like the Koda attempt to simulate this by running the gas flame across the top of the oven. Heating from the top down encourages the crust to puff and the toppings to cook before the dough is done. To quote one retailer:

As the oven itself warms, it begins to release a slow, steady heat, creating two different cooking zones: a conductive cooking surface on the floor that reaches 650 to 750 degrees and a convective cooking zone of 900-degree air circulating in the dome, above the pizza. This temperature difference is essential for a good pie. The air above the pizza needs to be much hotter than the oven floor to cook the sauce, cheese, and any toppings (traditionally applied raw). The lower-temperature floor cooks the crust thoroughly yet quickly enough that it doesn’t dry out or become tough.

(temperatures in the quote are Farenheit)

An oven that was heated only under the oven floor would have a floor that was hotter than the air in the oven. This would result in the bottom crust being burnt before the cheese melted. I'd also be somewhat concerned about the stone cracking with use due to the rather extreme thermal change.

Based on your added photo, this means that the effectiveness of that particular oven is going to be dependent on how effectively hot air convects around the stone and into the air chamber of the oven. Since that's how a conventional gas oven works, it can work for pizza ovens.

The advantage to that oven design is that they provide you with an adjustable chimney, which means that you can tinker with airflow. However, there are two major disadvantages that make me think the oven will not actually work.

First, there's the huge door with no dome overhang. Take a look at a few different portable pizza oven designs: 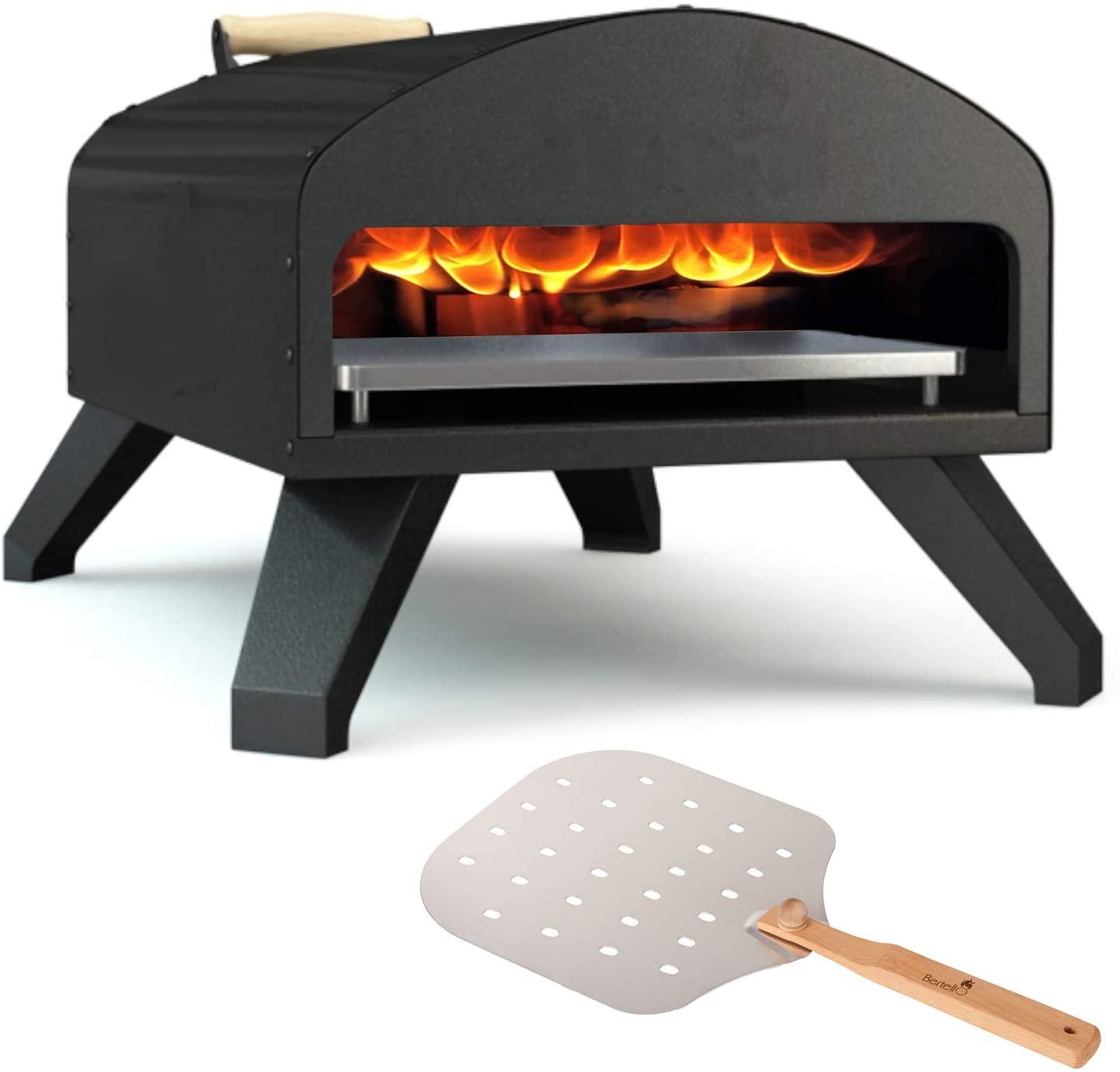 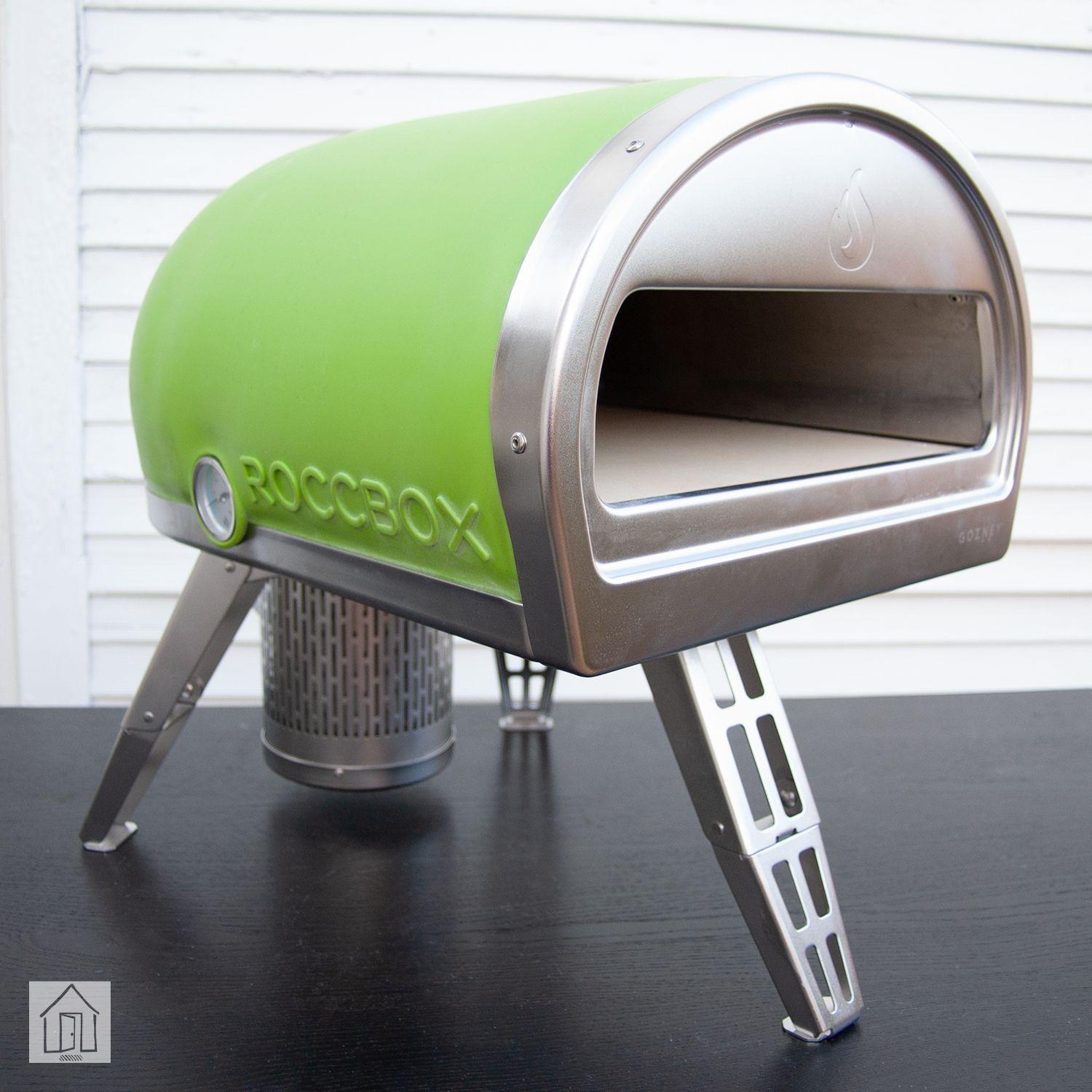 One thing you'll notice there is that those ovens all have an front opening overhang with a fairly narrow opening for inserting the pizza. This traps the hot air in the top of the pizza oven. The Stanley, on the other hand, has a wide open front which means that every time you open the door all of the hot air escapes. Even if that were the only problem, that would mean that you'd have 30-60 seconds every time you insert a pizza for the oven air to get hot again -- and 90 seconds is the normal total cooking time for a Neapolitan pizza.

However, that's not the only problem. The Stanley in the picture has huge non-closeable air vents at the back, above the level of the stone. With those vents, there is no way for the air in the pizza oven to ever get hot enough -- and the cute chimney is essentially pointless.

Given this design, I would expect the Stanley to work poorly as a dedicated pizza oven -- or to work about the same as your regular in-home oven. If you're looking for an affordable solution, I would recommend a kettle-grill pizza oven conversion as a more reliable (and cheaper) one.

(incidentally I own a 12-inch Koda and have produced many, many pizzas in it. It heats up to 400C in around 20 minutes)

Not the answer you're looking for? Browse other questions tagged oven pizza pizza-stone or ask your own question.