Is there an ultimate way to make a rotatable pizza stone?

So I've bought a gas-powered pizza oven reminiscent of the Ooni Koda 12. It gets the crust done alright, but as I expected earlier it is quite difficult to rotate the dough using a peel without ending up with some parts burned and without an overall unevenness of baking level.

I've looked anywhere but couldn't find enough information on how to construct a (non-motorized) rotation mechanism into a pizza stone which could healthily withstand temperatures of 500 Celsius and perhaps a bit more.

Possible issues I suspect: pizza stones are cordierite — I don't think it can hold screws; so you consider gluing — is there any chemical glue which doesn't release toxic fumes at such degrees? And then considering the types of bearings available — most don't mention it but aren't they likely oiled with stuff that, again, might prove unhealthy within a gas oven?

I suppose this question isn't exactly food related, but I haven't found a definite SE category for this.

Yes, I can recommend a method because I did this*. Per my blog post, the secret is to buy a round corderite stone of the correct size, glue that to a stainless steel turntable, and bolt that to a thin metal sheet. The steel turntable works because it's not sealed and there is no grease in it, so it won't boil off.

Since I published that blog post, I've learned that there are other high-temperature adhesives that might be better than the one I used, so you might try one of those.

As an alternative to an adhesive, you could get flat steel bars and screw them to the holes on the top of the turntable, and then bend the ends to firmly hold the round corderite stone. In my particular case, I didn't have enough clearance for those, hence the adhesive.

I suggest something much simpler - make your pizza stone with feet including a large one in the centre and quite a lot around the rim. Then have a tool, probably looking a bit like an oversize carving fork so much narrower than a pizza peel, that goes underneath, engages the centre foot and one outer one, and allows you to turn the stone, taking a little weight if necessary.

If you used a steel instead of a stone, this could be fairly easily made: I'd use bolts but the feet could be welded or brazed on. If you're set on a stone, a steel or brass (bolted/welded) frame could hold it.

Fabricating from metal, you could also make a top turntable (either a pizza steel or a stand for a stone) with a central cylindrical boss on the underside, and a bottom plate that fits the floor of the oven, with a hole to match the boss on the upper plate. Then drill into the perimeter of the top plate every few degrees, so you can insert a bar and turn in like a windlass. This sort of plain bearing would be adequate for the loads and speeds involved, with a little clearance especially if you use two different metals. It could even be lubricated - put a little flour in there and the resulting carbonised dust will act as a lubricant. Actually this looks better in 3 parts, and doesn't need any fasteners.

Here's a sketch (note that I haven't included the holes needed to put a bar in to rotate it, and their spacing depends on the size of the oven opening) 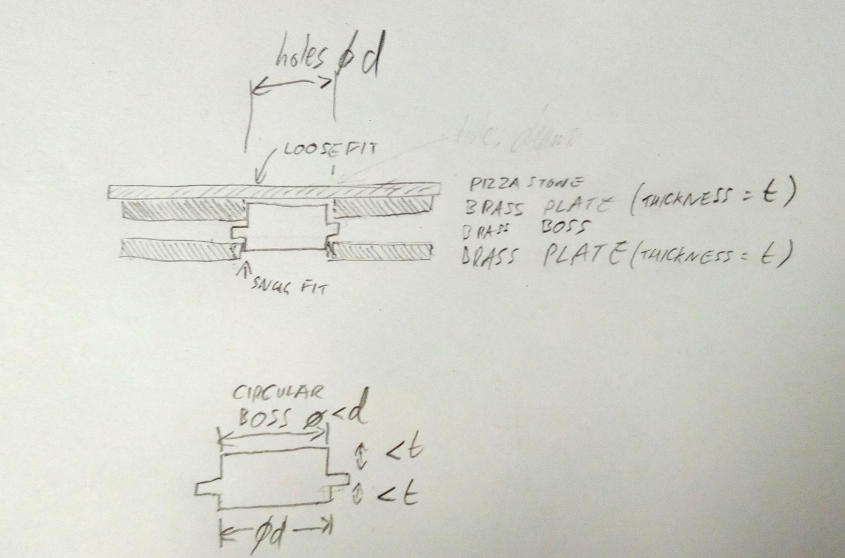 A steel should have more thermal conductivity and require less rotation than a stone anyway.

Not the answer you're looking for? Browse other questions tagged oven pizza-stone or ask your own question.

14
Storing Pizza Stone in Oven
6
Pizza Stone in Electric Oven
6
Use of pizza stone in gas oven
6
Differences between the oven stone and the pizza oven?
7
Why does a pizza stone make my pizza dough bread-like?
2
How to make pizza not stick on ceramic stone?
2
Cooking pizza in tiny gas oven with pizza stone
3
Pizza stone as floor pizza oven vs firebrick
5
Is smoothing out an oven's on/off cycling possible with a pizza stone?