After rolling pizza dough, how do I move it to a pan without ruining it?

On multiple occasions now, I have rolled pizza dough out to a circle about 14" in diameter, and then I have trouble moving it to my pan.

Then after I have gotten all the dough off the counter, it is obviously too big to fit in my hands, so much of it will droop as I move it to the pan. Some parts of the dough might even fold onto itself by the time I have it in my oiled pan. Then I have to try to unfold it (nearly impossible) or flatten it out and reshape it in the pan. This results in some ugly dough that doesn't rise uniformly. One time the dough had folded onto itself so badly that it didn't seem salvageable, so I threw it out and started all over.

How can I roll my pizza dough without it sticking to the counter, and then how can I move it to my pan without it folding onto itself? (BTW, I am using a recipe that calls for 227 grams of water and 346 grams of bread flour.)

dough pizza rolling
Share
Improve this question
asked May 16 at 15:25

Either your dough is too wet, or you're trying to roll it all out in one go.
You cannot get enough flour under a ball of dough to survive being rolled out to 12".

Roll it, flip it, turn it; flour it each time, under & over.

Then, assuming you don't have a specific pizza peel, then one hand & an egg/fish slice/spatula [international terminology differences, see comments] will get it into the pan in one piece. You can even get a bit cavalier & hold it like a duvet - flip into place.
Then you can start decorating it.

I can make 14" pizzas by this method; that's the size of my pans.

Pizza dough will be somewhat sticky, but if it's super sticky you may want to try lowering the hydration a bit and see if it helps.

If your hydration is right then the answer is simply use more flour. When I first started making pizzas I was surprised by how much flour I had to use to keep it from sticking. Scatter a thick layer on, and if it starts to stick peel it up and put more before it really adheres.

As for moving it to the pan you use the same technique as for pastry which is rolling it around your rolling pin and then unrolling it on the pan. You could also slide the pan under, but not if it's an oiled pan. Personally I prefer to use semolina or coarse corn meal instead of oil, the grains act as miniature ball bearings and give the bottom a nice crunch.

Reading your post it does sound like your dough may be a bit fragile, make sure you are using bread flour with a high gluten content to get the strongest crust.

First, make sure your dough is at the proper consistency. This means that you have to have developed your gluten well enough during the kneading stages, and that with the second knockback, you should have brought it back to at least somewhat elastic stage, it shouldn't be too sloppy.

When you have this, be sure that you have enough flour. "Sprinkle" is a bad word in this context; you want your counter to be covered with an even layer of flour at least 0.5 mm thick after the rolling. As Unlisted said, you will have to add flour during the rolling process.

The upper surface also needs sufficient flouring; if it didn't get enough during rolling, you can sprinkle some on top (this time actually sprinkle) and disperse it with your flat hand. This will take care of the "sticks to itself" part.

The pizza thickness is also important, start with thicker pizzas (about 1 cm) and only work down as your skill increases with experience.

When you have your nice, round, rolled 1-cm disc laying comfortably in a bed of flour, you should place the oiled pan close enough, pick it up between your thumbs and forefingers, and drape it onto the pan. I tend to pick it up at 10 and 2 o'clock, and use an initial contact point at 6 o'clock, laying it gently towards 12 o'clock.

If the dough is larger than the pan or has protrusions, make sure that the extra portions stay caught on the rim, and don't fall onto the dough in the pan. Then, after all the dough is on the pan, you can start picking up corners of the pizza close to the rim and allowing them to gently lay down towards the place where the pan wall meets the pan bottom, and either make a rolled crust or cut the dough off.

If later you are aiming at very large pans or very thin pizzas, it is worth considering the strudel method, where you use a thin rolling pin and roll the dough around it for transfer. But that won't work well with a pizza above 5 mm in thickness and/or around 30 cm in diameter.

For me, using these methods solved sticky dough almost completely.

Wrap around the Rolling Pin 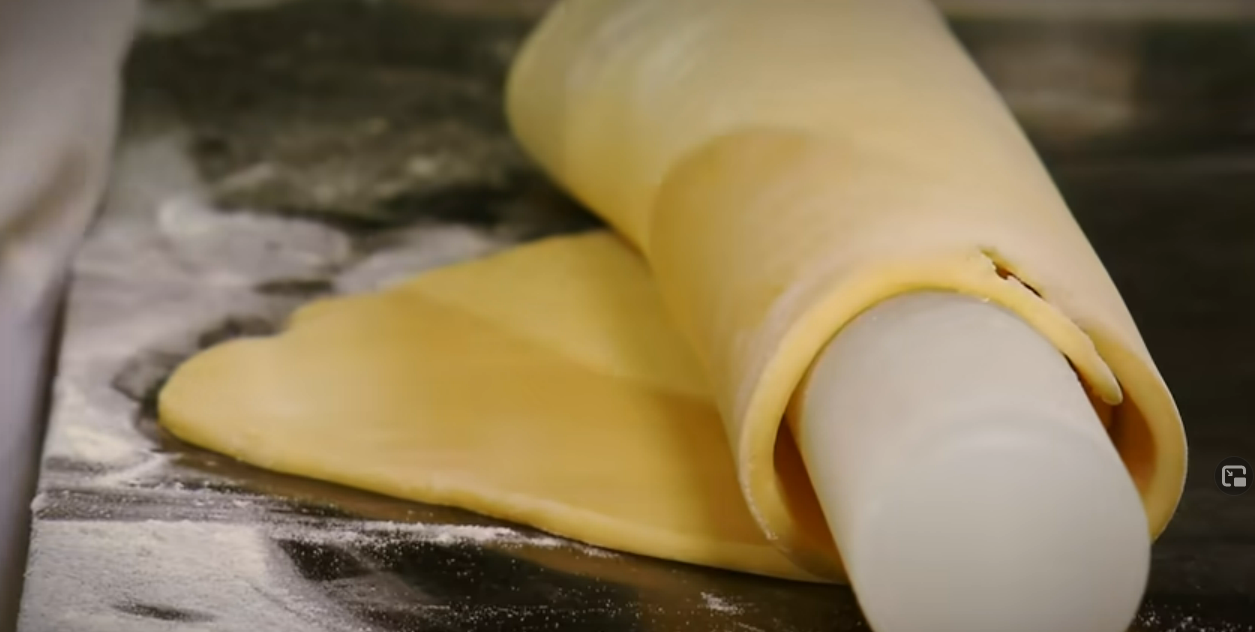 There are a few things you can do. Generally speaking, sticky dough does come out nice and delicious at the cost of being able to handle it well. You either practice handling more sticky dough by using more flour/oil/semolina and get used to it or lower the hydration level and make it more managable. I recommend the latter.

As for the very act of transporting the dough from counter top to your pan, there are 2 common options.

Shape the pizza inside your pan. This is generally a very good and highly recommended option. For that simply flatten the dough a bit, oil up your pan and proceed to push the dough into the corners of it. If the dough resists fitting into the shape, simply wait 5 minutes and continue shaping. The dough will relax and be more managable. The oil still crisps it up nicely giving you a decent crust. If you added to little dough into the pan then simply don't bother to stretching it to fit your pan.

Use a pizza peel or equivilant If you already flattend the dough on a generously floured counter, it does not have enough structual integrity to survive being pulled and held up in a rough manner. Especially if the toppings are already on it. Simply take a pizza peel and with one confident and fast move slide it underneath and transport it wherever you want. You can also use cardboard or anything thin and big enough. This relies on you having floured your countertop veeeeerrry generously when working sticky doughs.

The dough needs to "rest". Roll it out, let it spring back, (free it from the counter if it sticks), let it sit for a few minutes, then roll again and it will roll out a little bit bigger.

(I'm learning this to too. If i could just figure out how to make it round without cutting it into a circle, lol.)

Full disclaimer: I'm very much not an expert.

My method is apply liberal amounts of olive oil to my hands, before picking up (or breaking off) a dough-ball. So I don't re-flour my dough, or the bench.

Instead of rolling, I push the dough into place with the "fat bit" of my palm (the heel?) and then finish stretching by repeatedly poking with my fingertips. Sometimes I pick the half-formed dough up and allow it to stretch a little under gravity, off balled "blunt" fists.

Once it's heading towards target size, I then put it onto the final tray (or just some baking paper) before any final tweaks to the geometry. With enough delicious olive oil, it never sticks to anything.

I'll only do this with pizza dough, not pasta. Pasta dough gets lots of surface flour - but others have covered this technique well already.

I have a neat rolling gadget, basically a nine inch tapered dowel, so I can roll in the pan itself. I'm not sure where I bought it.

Here's another way: roll it out on a floured (non-terry) cotton dishcloth, flipping it over and re-flouring lightly but frequently. When it's the right size, re-flour lightly and fold it twice -- in quarters, or wrap it around your rolling pin.

There seems to be a lot of confusion here, including people who use pans for pizza. While deep dish pizza is a thing (and can be very good!), I believe that the OP want to make something closer to Neapolitan pizza, where the pizza goes straight onto the (stone or metal) bottom of the oven (or pizza stone).

Nathan Myhrvold, in his seminal 'Modernist Pizza' has a couple of thought on this. One key idea is to use a lot of flour (or even better, semolina) on the work surface, the first couple of times. Another is to use a slotted pizza peel, which makes (some) of this extra flour come off, when you pick up the pizza. The most important aspect, however, is to work fast! Once you have spread out the dough, you should be quick. If possible, put it in the oven (on a pizza stone, or in a real pizza oven) within 30 seconds. This takes some practice, but if you have all your topping ingredients ready it's possible. You can also build your pizza on the peel, but that works less well on a slotted peel, as it can get stuck.

Another cheaty trick is to build the pizza on baking parchment. You don't get quite the same crunchy base, but it's much easier!

Not the answer you're looking for? Browse other questions tagged dough pizza rolling or ask your own question.

34
transfer pizza onto stone without sticking
5
How can I get my defrosted pizza dough to transfer from peel to oven?

15
Defrosting pizza dough correctly?
1
How to fold camembert in dough
1
Pizza dough texture and workability
0
Pizza without yeast
4
How can I use corn meal more efficiently when making pizzas?
4
Should I reshape refrigerated pizza dough into ball again when taking it out of the fridge?
1
Why does my pizza dough (and other doughs) go sticky on freezing and defrosting?