Making Raclette without special equipment or specific type of cheese

I have a sizable chunk of emmenthal cheese taking up valuable space in my fridge, and I was looking for a recipe to use it in. Drilling down into Swiss cuisine at wikipedia, I encountered an intriguing mention of Raclette, an apparently simple meal of 'scraped' hot cheese with various accompaniments.

My questions are: 1. Is emmenthal an acceptable alternative to true raclette cheese?
2. I have no intention of going out and buying a specific 'raclette' gadget, so is there some sort of workaround using ordinary kitchen utensils that will allow me to recreate the traditional ralette experience (ie. scraping the edge of the cheese with a knife)?

Speaking as somebody who grew up in and lives close to the Emmental region: No. Raclette is a very specific type of cheese particularly suited for frying. It is produced mainly in the Valais region and is an AOC.

If you try a raclette type dish with Emmental, you'll end up with a stringy mess of questionable culinary value. About the only thing I can think of doing with Emmental (apart from eating it on bread or with baked potatoes) is cubing it into vegetable soup.

I would recommend inviting your friends and family over for a cheese fondue party. Fondue requires a large amount of Emmental, so this should take care of your space issue. Also, Emmental is the perfect fondue cheese with its distinctly nutty flavor that complements the addition of dry white wine and Kirsch liqueur.

To answer the other half of your question, if you did want to do a raclette without any special equipment, I guess you could do something equivalent using the grill in your oven, but you'd have to be eating in the kitchen. You'd need to stand the cheese on something, with one side close to the grill, then whip it out and scrape of the melted bit every so often. (Note: that this would actually be easier with (rectangular) Emmental than real (semi-circular) Raclette cheese)

I would image that in "the old days", the cheese was just laid flat on a surface and placed near any source of heat (open fire), though this would be complicated by the cheese 'running' on its own.

Just for culture's sake, here is what a traditional raclette gadget (four à raclette) looks like: 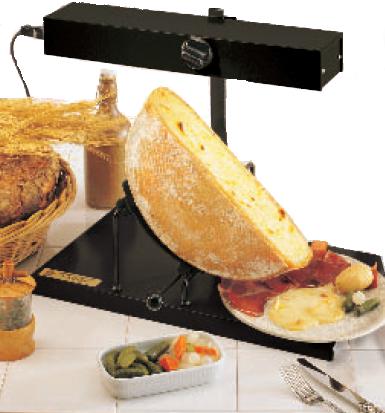 And here is what a modern one looks like: the best are combined with an invertible top which allows you to do pancakes on one side, and table-fried meat on the other (not typically all in the same meal, I hasten to add!) 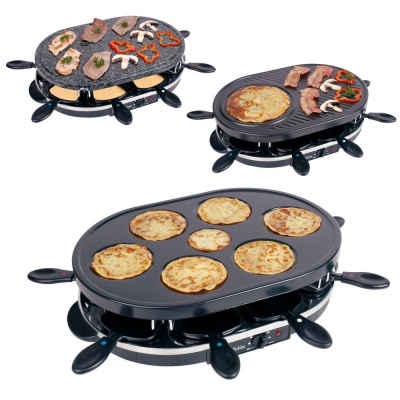 11
Fondue without Gruyere cheese
12
Do specialty cheese-cutting tools have specific advantages over an ordinary knife?
11
Hot chocolate and cheese (Colombian Special)
7
Is this extremely soft "French raclette" cheese actually meant for raclette?
4
Questions about making hard kefir cheese
0
Making pizza toppings stay intact without using cheese
3
Making Cream cheese and Mascarpone cheese at home
5
How to cook Parmesan Cheese into a broth without making globs?
4
What Cheese Culture is best to use in making Camembert cheese?