According to the Ninja Foodi FD402 pressure cooker guide, one can make 2 pounds of dry beans using the following instructions: 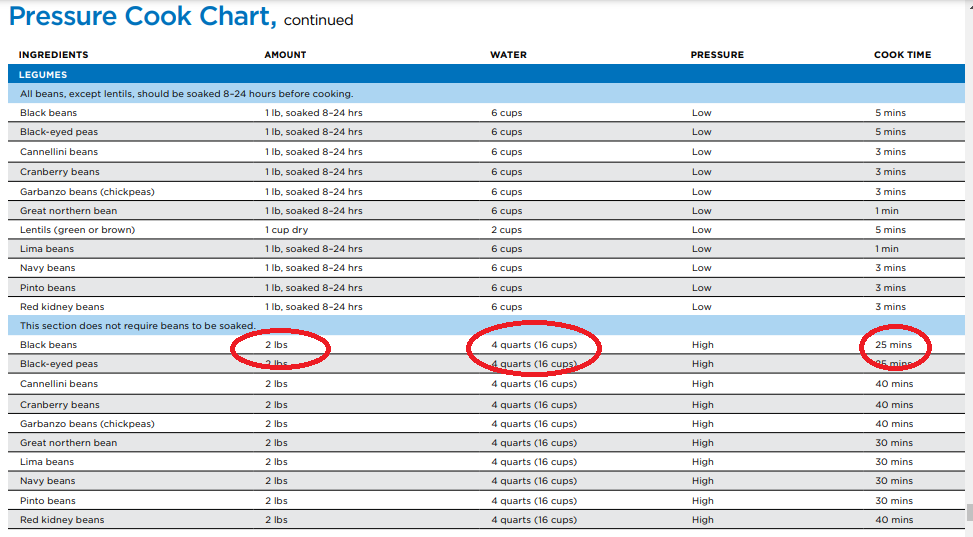 Essentially, I'm not sure the water/time is in a normal ratio of quantity of beans, so I want to confirm this. If its not, how much water and time would you reduce each by if I half or quarter the amount of dry beans? (It is slightly confusing that the book explains the pre-soaked beans assuming a single pound as well but oh well -- it would have been a bit interesting if they kept both at the same quantity.)

The beans/water ratio is not particularly important as long as there's enough water. You want the beans covered throughout cooking, keeping in mind that they'll expand and the water level will drop. If they cook "dry" on top, those beans will have a different [and worse] texture than the beans on the bottom. So halving the water is probably enough, but you may want to reduce it to 2/3 or so to make sure they don't end up cooking dry on top.

Pressure cooking time is measured once the beans are fully up to temperature/pressure, so to a first approximation, there should be no difference in cooking time based on the amount of beans.

If you want to be precise, because a smaller amount of beans would spend less time coming up to pressure (during which it would be cooking, albeit more slowly), the at-pressure cooking time should be slightly extended. I wouldn't bother with that, though. It's not going to be a significant factor in the variability in "optimum" cooking time.

Bottom line: Use "enough" water; 2/3 for half the beans should be fine. Try it with the same cooking time as in the table. Later, adjust to personal preference if necessary.

Not the answer you're looking for? Browse other questions tagged beans pressure-cooker timing or ask your own question.

2
Ideal pressure cooker size for cooking a pound (454g) of beans
1
Pressure Cooker to Stovetop conversion?
3
Baked beans still firm after soaking and hours of cooking
17
Black Beans - Toss the soak water?
4
Adding cold water during cooking of beans and cooking time
4
Split beans in a pressure cooker?
2
How to incorporate quick soaked beans into a simple vegan chilli recipe
1
Macronutrients and cooking temperature of beans?
4
Cooking kidney beans in a slow cooker, how do I make sure they're safe?
1
Why do my mung beans turn from green to dark brown in a rice cooker?