How did replacing flour in muffins go so wrong?

I had a whole bag of Cocoa Puffs that had gone stale, and thought it would be fun to mess around and see if I could bake something with them. So I aimed for muffins. I more or less based it on a banana muffin recipe I make all the time:

I didn't really expect it to go well, but I figured I'd probably have bad muffins, not this: 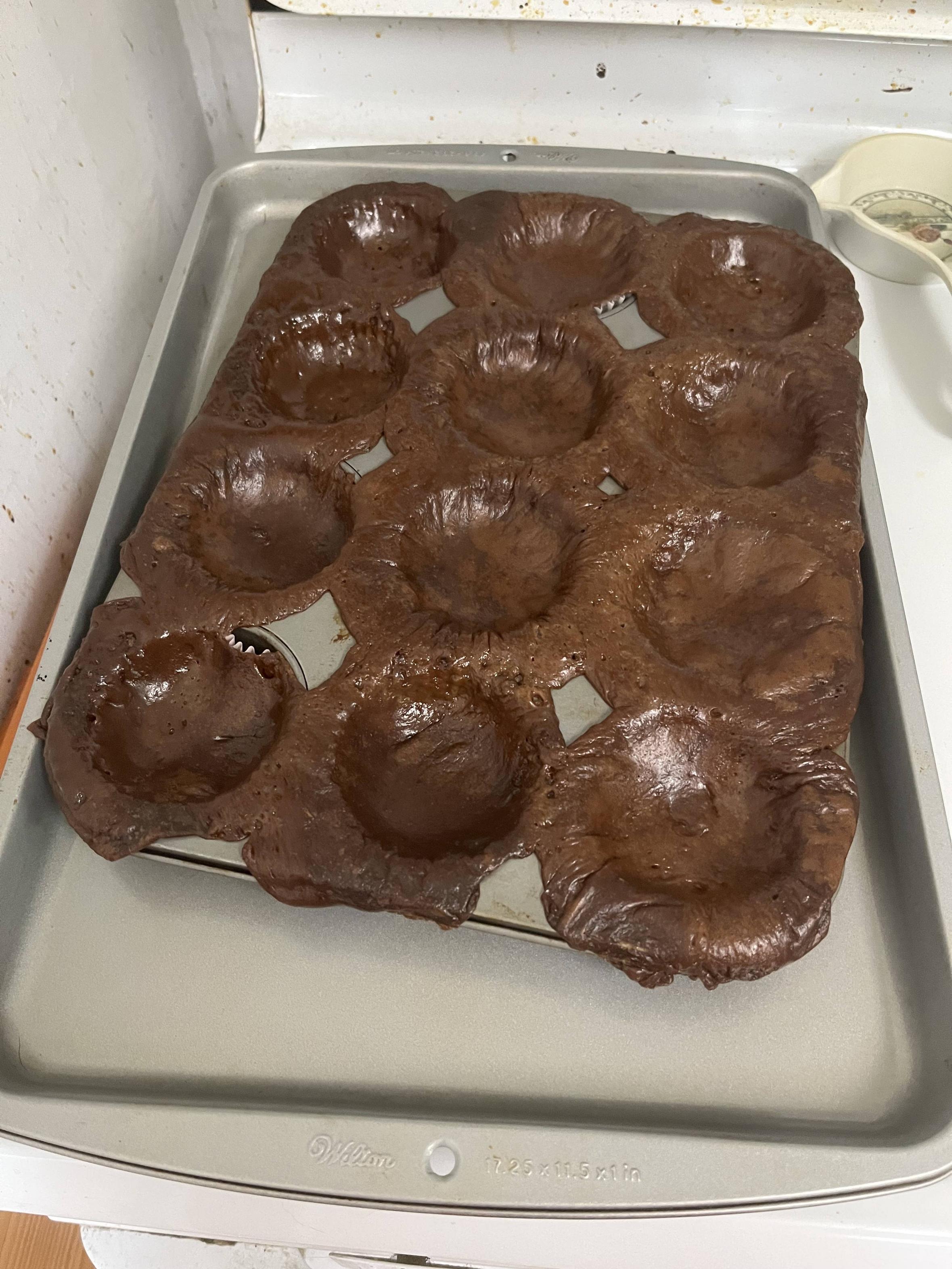 The batter was stretchy, like less-sticky bread dough. I spooned it into paper cups and baked it at 400ºF. At first they looked like they were puffing up as expected, then they looked a little imploded in the center and shiny on top, then one by one they burst and started dripping everywhere. I expected 20–25 minutes but had to pull them out at 15. The aftermath was soft but cohesive and a little rubbery, not at all hard to clean.

So, lesson learned: Cocoa Puffs are not flour. But what chemical reaction happened or didn't happen to make it go this wrong?

Muffins and cakes rise because of chemical leavening agents and the expansion of hot gasses, they stay risen because the flour and sugar forms a structure which traps the air, then solidifies enough to hold its shape once the expansion has stopped. Cocoa puffs are made in a process called extrusion, where batter is pressurized and shot out in little spurts. On the release of this pressure the little squirt of batter expands and almost crystallizes in the same way as a muffin or cake, in other words puffs are cooked by a different method, but the processes which make them hold their shape is the same.

These processes aren't reversible, you can't turn a cake back into flour, milk, sugar and eggs. Grinding up cocoa puffs is essentially the same thing as grinding up dried cake, they may absorb some moisture but as the chemical and physical changes involved in crystallization have happened it won't happen again.

What it looks like is that your batter expanded enough to go over the top of the muffin pockets and then outward, then collapsed because there was no structure to keep the shape.

Everything you describe sounds like your batter was able to trap air much better than a typical muffin batter - you say yourself it was sticky. When it started baking, the air expanded, due to the baking powder, the production of steam, and the plain old gas laws (expansion under heat). But you did not have a muffin batter, which creates a porous inner structure and sets into it under heat. Instead, it was like a balloon inflating. And then the balloon wall was not strong enough to contain the hot gas, and it burst.

You can see another argument for that theory in your own observation that the cooled-down results were "rubbery". It seems to have been stretchy and rubbery like a balloon, and to have acted like an overinflated balloon.

Flour is not merely a carbohydrate-rich powder used to add substance to a batter or dough. It contains gluten which is essential to the structure of most baked goods. Your cocoa puffs are processed puffed grain, which is not flour and shouldn't be expected to behave similarly.

Not the answer you're looking for? Browse other questions tagged baking substitutions food-science or ask your own question.

4
What are the dips in muffin/cupcake tins called?

16
How do I get my homemade english muffins to taste like english muffins?
6
How should I alter a chocolate cake recipe to make plain/flavoured cake?
5
How to substitute unsweetened baker's chocolate for powdered cocoa in cake recipe
6
Adding/substituting non-flour ingredients in bread
1
What size cake pan could be substitued in place of muffins?
2
Stuffed Dumpling Made with Rice Flour
0
Why did my devil food cake come out flavorless?
3
Why does my cake get hard after baking?
5
How can I substitute dutch chocolate cocoa for flour and maintain proper recipe PH in this cookie recipe?