What happened to my pizza dough?

I am a complete noob to baking/making dough so if I made a clear mistake in my process please correct me.

I am trying to make pizza dough. Based on the recipe I was following I suppose its neopolitan pizza dough, but honestly I just see it as pizza dough.

I mixed 500g of bread flour, 14g instant yeast, 14g cane sugar, 380g (65% hydration) of water at 115 degrees F (46 degrees C). I also mixed in 70g of Greek Yogurt and some arbitrary amount of salt and garlic powder. Once I mixed this all together in a bowl, I attempted an easy kneading process where I cover the bowl with saran wrap, then every 5 minutes I unwrap the bowl, fold the dough over on itself from all 4 sides, then rewrap, repeating 4 times (20 minutes). After doing this, the dough was still sticky and wet, and NOT springy at all.

Finally, I lifted the still very sticky dough out of the bowl, sprayed with some olive oil so it doesn't stick, then let the covered bowl sit on my windowsill under direct sunlight. My understanding is that doing all of this was supposed to build the gluten network as well as let the dough rise.

After about 2+ hours of it sitting on my windowsill, my dough looked like this, which doesn't look right at all: 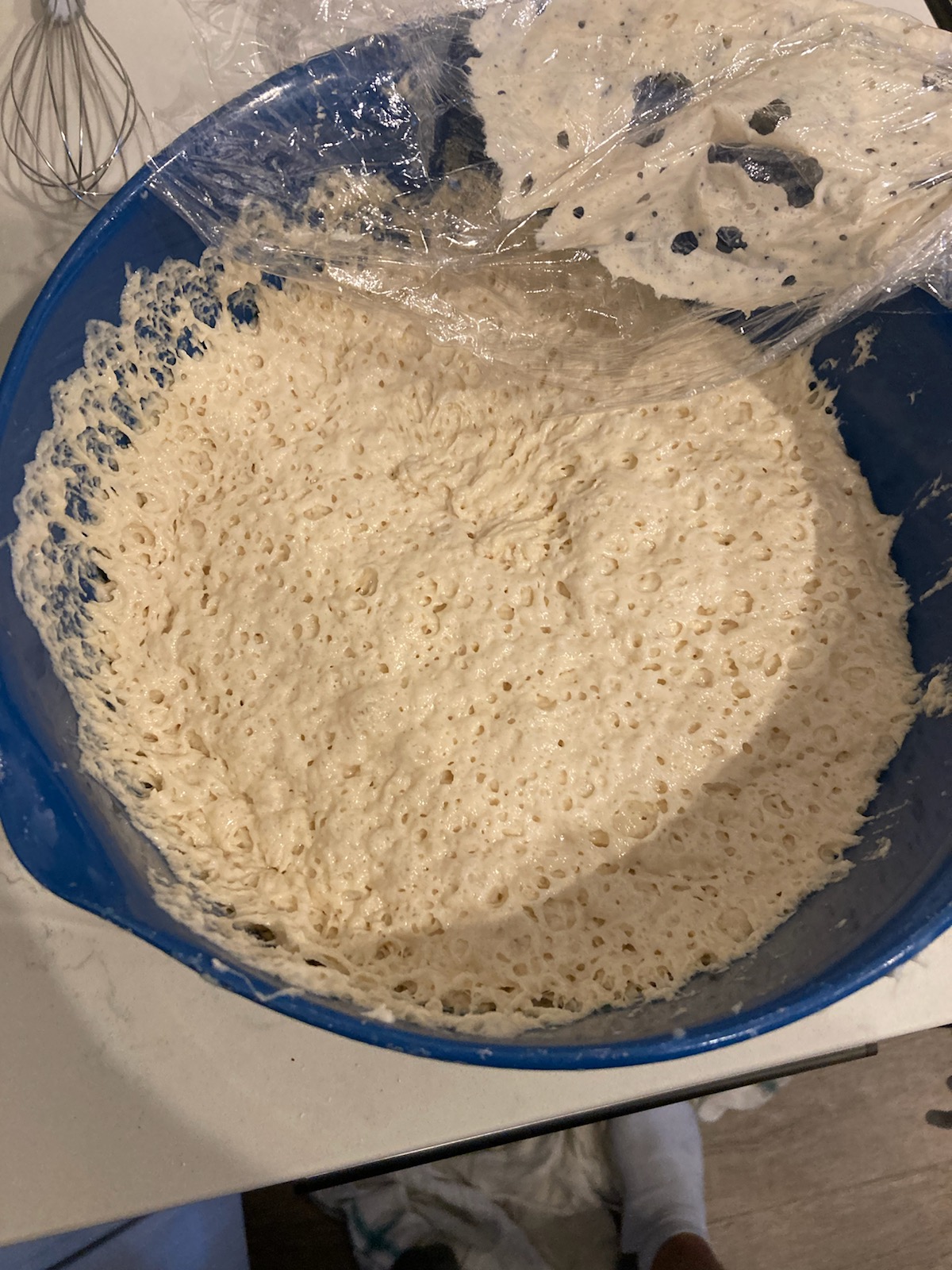 It did rise, but seems to have "popped". And certainly the saran wrap did not have dough on it before, so my assumption is that the dough rose to the point where it hit the saran wrap then "popped". It was still sticky at this point, so I "kneaded" it in the bowl (mostly just mushing it around to be honest), added a bit of AP flour on the surface of the dough, rewrapped then placed in the fridge.

My question is, is my dough still useable for pizza? What did I do incorrectly? The video I was following gave the instructions for kneading like that and stated the dough should be springy afterward, but it was not as I mentioned above. My dough is still very sticky. Also, I have no idea anymore whether I should let it proof at room temp or in the fridge.

My understanding of pizza dough is:

Can someone help me understand what went wrong here and how I can correct this for next time?

If you divide the amount of water (380) by the amount of flour (500) you get .76 x 100 = 76% hydration. Then, you added 70 grams of yogurt (which is not usually found in pizza dough), but that adds to your hydration....now you at around 90% hydration. Neapolitan pizza is usually around 55 to 60 percent hydration. So, I would say you have too much liquid for the amount of flour, and you might want to use a different formula.

Not the answer you're looking for? Browse other questions tagged pizza pizza-dough or ask your own question.

6
Food processor for pizza dough
3
Napoletana Pizza dough not elastic and breaking
6
Working with sticky dough for pizza making
6
Pizza dough changed from usable to sticky
6
Pizza dough is too soft to stretch well
2
When making pizza dough ahead, at what point in the process should I let it rise?
1
Dough is super springy and sticky. Tears while stretching
3
Huge bubbles in pizza dough
4
Should I reshape refrigerated pizza dough into ball again when taking it out of the fridge?
2
Large milk dough for pizza; doesn't seem to knead at all