Why does my Indian food taste bland?

I recently tried an Indian recipe and event though it was spicy hot, it didn't have much flavor which surprised me for how much seasoning I put in. Does anyone know why this might be so bland?

In a large glass measuring cup or bowl mix together the coconut milk, greek yogurt and cream. Stir in the tomato paste, garlic, ginger and all the spices. Mix well.

Spray the inside of your crockpot bowl with cooking spray or grease with olive oil. To the bowl sprinkle the onion over the bottom. Add the chicken and then pour the coconut milk mixture over the chicken so the chicken is completely covered. Add the butter and place the lid on the crockpot. Cook on high for 4 hours or on low for 6 to 8 hours.

...and you have an additional ~870 g of food for approximately 1,320 g total, diluting the added salt content to ~0.1% without accounting for salted/unsalted butter.

Try adding a bit of salt, a small pinch at a time, stirring thoroughly to mix and tasting after each addition. Even better, use a liquid source of sodium with other flavour compounds - soy sauce, fish sauce, Maggi seasoning, etc. instead of salt.

From Strategies to Reduce Sodium Intake in the United States - SALT FLAVOR EFFECTS:

Salt imparts more than just a salt taste to overall food flavor. In work with a variety of foods (soups, rice, eggs, and potato chips), salt was found to improve the perception of product thickness, enhance sweetness, mask metallic or chemical off-notes, and round out overall flavor while improving flavor intensity (Gillette, 1985). These effects are illustrated in Figure 3-2, using soup as an example. In the figure, the distance of each of the points (e.g., “thickness,” “saltiness”) from the center point represents the intensity of that particular attribute. This figure shows that when salt is added to a soup, not only does it increase the saltiness of that soup (compare closed circles with open triangles and open circles for saltiness), but it also increases other positive attributes, such as thickness, fullness, and overall balance. 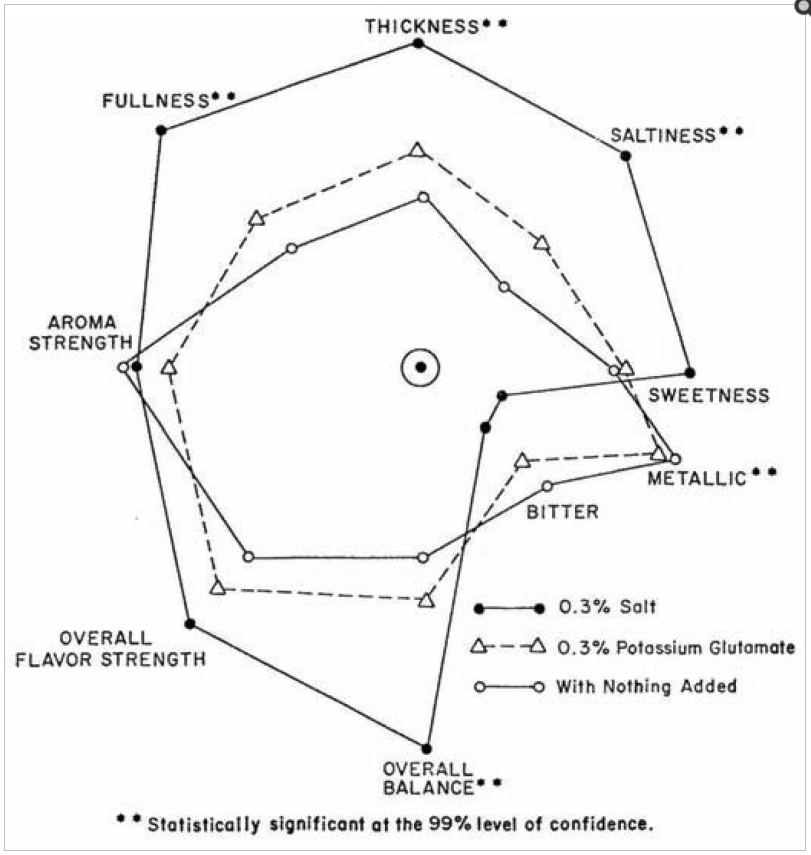 You just don't make a curry by throwing all the ingredients in a pan & heating them for a while.
Even using good ingredients & putting enough salt in, that recipe will come out bland. I'd also imagine it would be a little bitter too because of the tomato paste thrown in 'raw' & the amount of garam masala is complete overkill.

It's honestly just a lazy recipe - as comments indicate, it's a clickbait recipe. It doesn't belong on anyone's list of 'how to make curry', of any sort.

The more I look at even the ingredients list, the more I worry about it. It's a truly terrible recipe.
Even if we're using generic supermarket curry powder, there's nowhere near enough. There's also far too much garam masala [possibly to try cover for the fact it's going to be cooked into submission rather than added late so you can taste it].
There's not enough onion to make the sauce properly, so it's making up 'gravy' with a lot of additional liquid ingredients. I've never known quite so much 'wet' in what purports to be an "Indian" curry - coconut, cream and yoghurt. Maybe one of those, not all three.
…and cooking skinless chicken breast for 4 hours is going to come out like bullets.

So… under-salt, under 'curried', over-perfumed, consistency of soup & inedible chicken… what's not to like? ;)

If you read the comments under the online recipe, then once you get past the 'paid to give it 5 stars' reviews, you find complaints about each of these points.

I think the "Healthy" recipe title says it all here - although with the butter and cream components I think the author was stretching that point somewhat!

Seriously though, many healthy recipes are just reworked "Unhealthy" ones with reduced salt, sugar or fat content. These three ingredients are why so much processed food tastes so good, and why our taste buds crave for more.

As you have discovered, even a heavily spiced dish can taste bland if there is not enough salt or umami flavouring.

In the case of your Butter Chicken recipe, first of all I'd ensure the spices you use are fresh, and clearly have an aroma. Stale spices won't taste of much.

Secondly, a good dish is a balanced dish. Each flavour should compliment or contrast its neighbour. That is why chilli and chocolate go together. In the BC dish, there is a lot of richness to cut through, the danger here being that the dish ends up too rich or "Sickly". I'd be tempted to add some lemon juice or dry white wine at the end to cut through all the fat and cream. Another possibility would be to increase the amount of yoghurt and decrease the cream content etc.

Finally, the biggest issue with this dish. It is barely seasoned, and that explains why most professional recipes add "Or to taste" to salt measurements etc. It is a tricky one though, some people are more/less salt tolerant than others. The best guidance recommends tasting everything for seasoning before serving, and adjusting accordingly. If you must stick to such low salt levels (e.g. for health reasons), you could try increasing the salt level a bit but using a low sodium salt instead. Alternatively, you could add some MSG (monosodium glutamate), but I don't know what health implications this would have for someone on a low sodium diet, negative I presume.

22
Why does my curry taste flat