Then I noticed the 'filling' part, as I did not consider it would be different to the classic frosting in a carrot cake (hence why I thought and used the 'stuffed' word in the beginning of my question). I've seen there are differences between filling and frosting, and here. I always filled and topped my carrot cakes (and other cakes, chocolate cake with choco frosting unless I did a ganache, Red Velvet, etc) with frosting. Never did I consider that they should be made different (if they should at all).

So my question: is there any difference in BAKING filled muffins with filling (as all recipes I've seen) and baking filled muffins with frosting. Does adding butter to make it from filling to frosting, change anything in terms of baking it? In the SA.SE answer to the question, it is stated:

You can therefore have a filling made of frosting, but you cannot have a frosting made of filling.

But I'm assuming it's for already baked goods. What about for to-be-baked goods?

Anything meant to be applied cold or slightly warm to a cooled cake will melt in baking without special precautions, especially if it contains butter. But baked Alaska works so it's certainly possible to bake a sponge around a cold filling.

Freezing a lump of your buttercream or cream cheese frosting then surrounding it in cake mix before baking might be worth a try.

In terms of wording, "filling" is necessarily broader - you can fill with jam for example, but filling is inside while frosting or icing can go on top.

Cream cheese frosting for carrot cake may or may not include butter. I wouldn't use butter. It may or may not be used inside as well/instead of on top. There's no reason for including butter in one place and not the other, and definitely no reason to make 2 similar batches for one cake

First, you seem to be confused about the meaning of the terms "filling" and "frosting". They are both structural terms - just like the name "roof" means a specific part of a house, no matter if made out of tile, corrugated tin, or thatch, "frosting" and "filling" are both specific parts of a cake, no matter what they are made out of. If somebody writes up a recipe for "filling", then they actually mean a recipe for "a mass that is suitable for filling cakes". In reality, you can always use a mass-meant-for-filling to frost a cake, and mass-meant-for-frosting to fill a cake*.

It is indeed quite common for carrot cakes in the US to be filled and/or frosted with a mass based on cream cheese. This doesn't mean that it is universal that the mass for filled cakes will be different from the mass of frosted cakes. The recipe differences you found may be due to tradition, to selection bias, or to a preference for thicker layers of filling. So the question of using "filling" or "frosting" is not really meaningful.

Baking a "filling" or "frosting" mass inside a muffin

You will be facing two problems: 1) your mass mixing with the batter, and 2) your mass melting in the oven and then re-solidifying.

My intuition was that any creamy dairy-based filling will invariably run into the second problem, and so the original version of my answer suggested to not do it at all. After comments mentioning that it works in practice, I will revide: if you try the "pack it inside before baking" route, do use a mass which is both dense, and unlikely to get unpleasant after melting. For both reasons, you'll be better off if you don't include any butter, and stay as close as possible to pure cream cheese - or even use a cheese which won't melt, such as ricotta or quark, if you think you'll enjoy the different flavor.

If you want to be less restricted in your choices and be able to use any mass intended as frosting or filling, you can achieve this by baking cupcakes first and then piping the filling from outside afterwards. You don't even have to be especially good at piping, just use a long tip and press until it is full, but not overfilled.

Chris H's idea of freezing the core first is intriguing. It will likely require very precise time and temperature control and a lot of well-guided experimental tweaking to both the batter and filling, until it starts working. You don't want your filling to ever melt, and at the same time, you want all the batter in contact with it to bake through; that's a tall order.

* You may have to use a very thin layer if you are filling with something without structural strength, but it will still be a filling. And due to the way languages work, people may look at you strange if you tell them that you frosted your cake with a jam, and tell you that you didn't frost it, but glazed it. But these complexities are not all that relevant for the rest of the answer.

What I found curious about this filling (not frosting), is one of the 3 ingredients it has: flour. The ending result for these ones is nice.

As stated in my question, prepare carrot-cake muffins batter/mass/dough. For the frosting, the recipe stated

I used half the ingredients (And there was a some left over, so I guess dividing by 3 would have been fine. I used less sugar though. Beat well sugar and butter until specially creamy (5 mins), then add cream cheese. 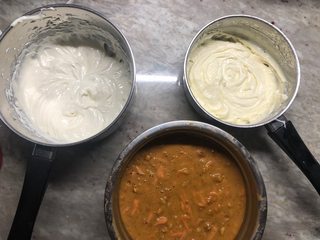 For the filling part, I first filled the base, filled a sphere of filling/frosting (seems small in the picture but I added more after taking it), fill sides with muffin, repeat 2-3 times overall. I tried to do it equally for all muffins. It's quite some process, troublesome and gets everything a bit dirty. 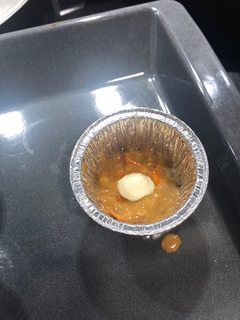 I filled 5 muffins on the right with frosting, 5 on the left with filling. The ones with filling seemed perfectly fine. The ones with frosting on the other hand, exploded. The texture might seem foamy, but it was actually like grilled cheese. I would post another picture with the looks of them after some resting, the cavities of the now missing frosting inside. But this answer already has too many picutres, sorry. They were empty on that side, so the butter not only melted into the muffin but also helped some of the frosting firm up, and made it into some kind of sweet grilled creamcheese. 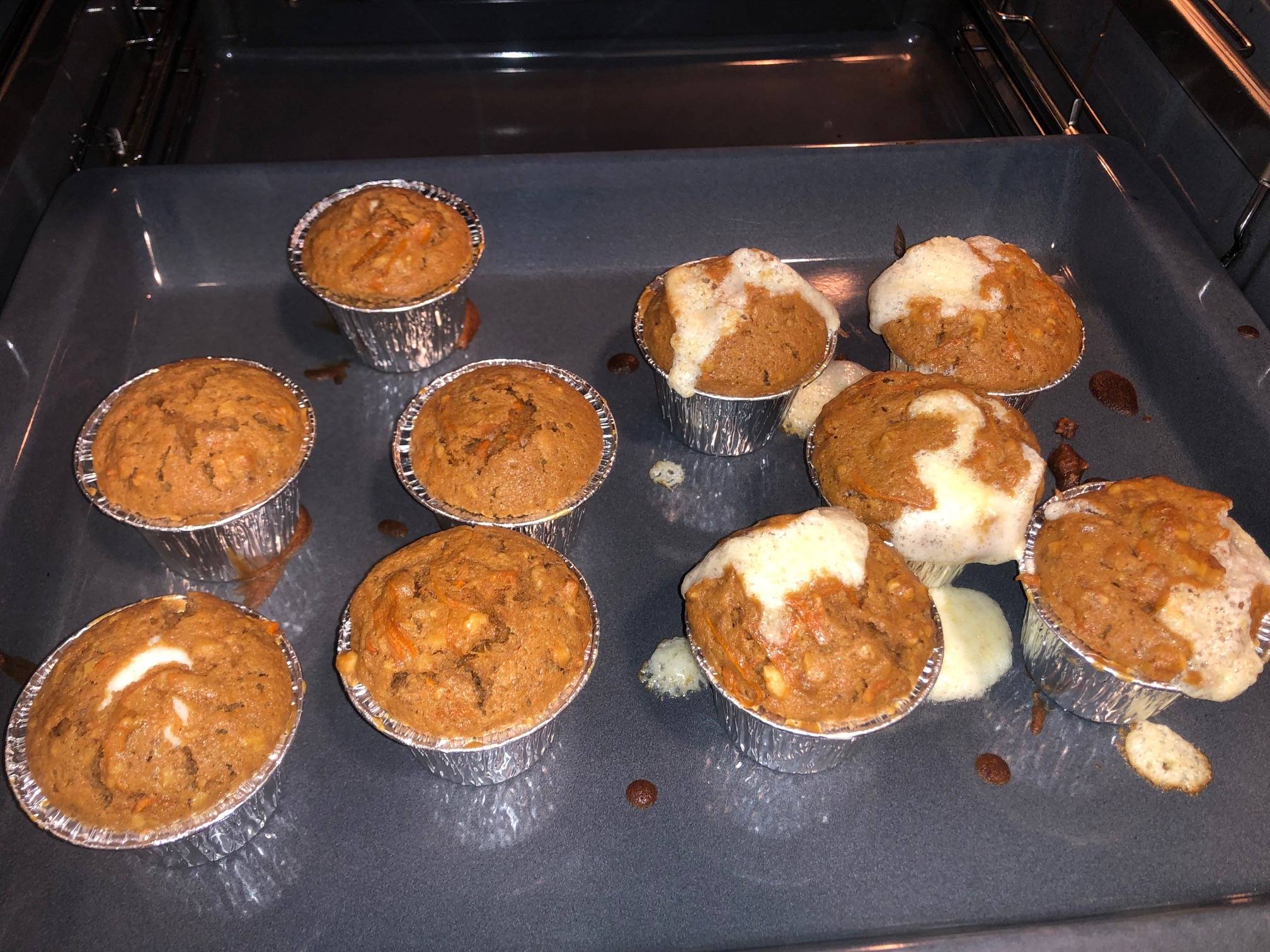 And the final result, on the right, "cut in half" is a frosting filled muffin, and on the left is a filling filled muffin. It had a texture similar to oven cheesecake. I guess flour as a main ingredient made it's wonders. So as a final answer: If you want to bake filled muffins (not filling them afterwards), use filling, not frosting (for these specific muffins and this specific filling). 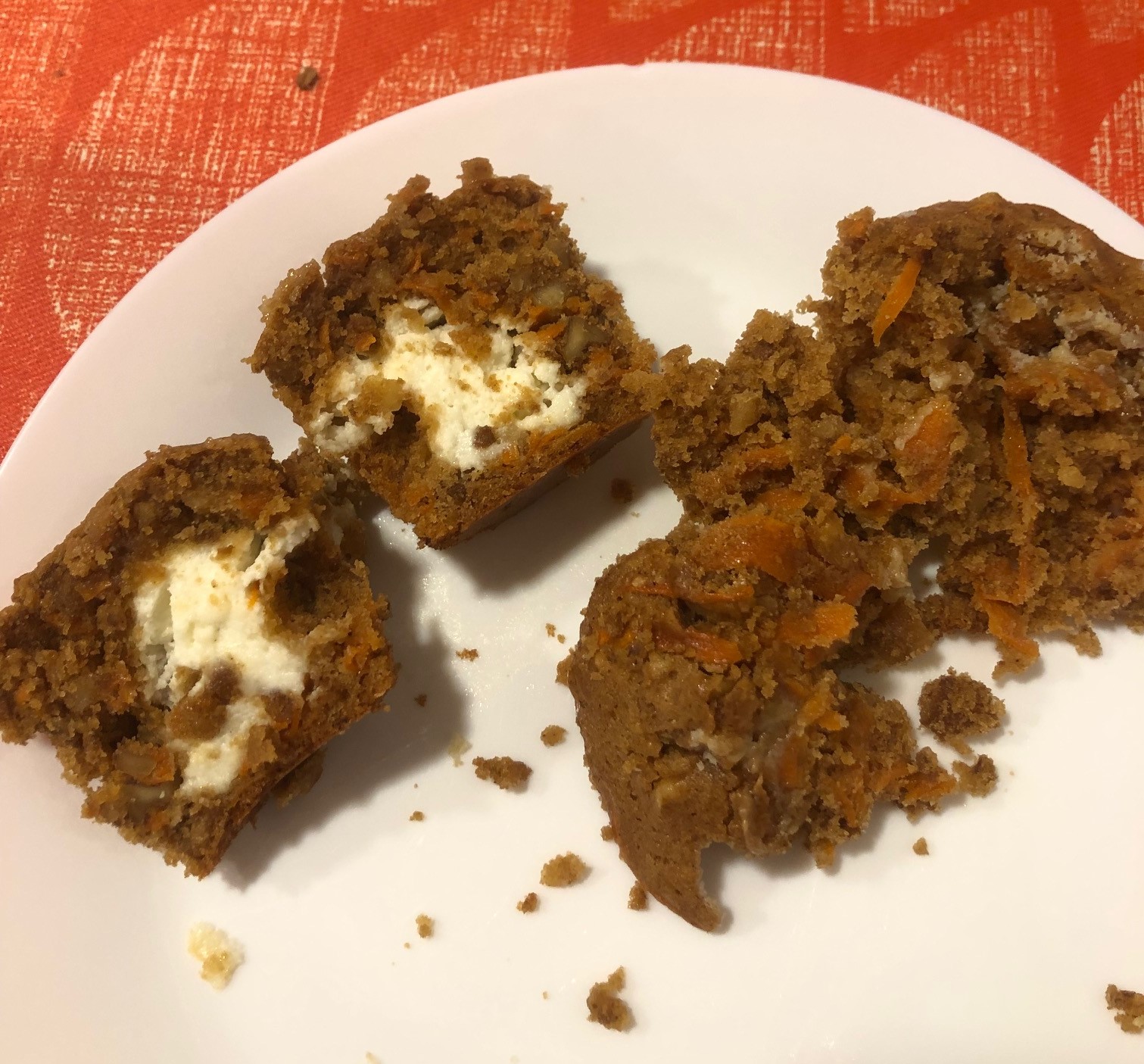 3
Can I leave a cake / cupcakes frosted with cream cheese frosting out on the counter?
3
How do I prevent filled pretzels from blowing out?
3
what is the correct consistency for cream cheese frosting
4
Smallest muffin size without losing the muffin top?
2
Will lowfat cream cheese keep filling from setting?
5
How to make frosting very white, fluffy, and shiny?
1
Is there a frosting similar to whipped cream but without cream?
2
Can I increase cooking time of bread to make it less gooey?
0
How do you decide when to deviate from baking ratios?
1
How do I make a cookie with a cream filling (similar to an Oreo filling)?