Is sugar in syrup necessary?

What is the role of sugar in this syrup? (I know syrup is sugar + water by definition.) Does it have any role here besides making the liquid sweet? (e.g. flavor extraction, preservation, etc.)

Why I'm asking: I'd like to make a diabetic variant, without sweeteners (can cause digestion problems). Would it work without sugar?

As you said, syrup is sugar with some water and some flavorings, in your case herbs. It is frequently used as a concentrate for flavored drinks.

If you instead boil herbs in water, you are not making syrup, you are making simple herbal tea. So, the consequences will be

An exception to the safety problem would be if you acidify it sufficiently to do a water bath canning, but then people will no longer want to chug it from the bottle. They might, or might not, enjoy it after dilution - but it will be a sour drink, unmoderated by sugar, which runs counter to the taste of most people in our culture.

And in the end, the question is why you would go to all that trouble. Tea is easy enough to make on the spot, and tastes better fresh. Why bottle it at all?

‘Sugar free’ syrups exist, but they usually have some sort of artificial sweetener as a replacement.

Besides the sweetness, the sugar gives the liquid viscosity that may be necessary for some applications, and that’s usually replaced with gums or similar. And sugar in sufficiently large amounts is a preservative, as reduces ‘water availability’ for microbial growth.

If you’re not adding a sweetener to your mix, I would probably call it an ‘herbal infusion’ or a ‘tincture’. I suspect that you would need to increase the acidity or make other changes for preservation purposes, but I’ll have to leave that for people with more expertise in the matter. You might also want to use smaller bottles so it’s less likely to spoil before being used up.

Sugar traditionally is an essential part of sweetener syrup, the reason being that pre-dissolving the sucrose as an aqueous solution makes it much easier to mix into fluids where solid sucrose doesn't as easily dissolve - ie. cold beverages, whipped egg whites and cream, etc. The added flavourings are the optional component.

For food safety, the free water in solution is bound to the sucrose molecules. More sucrose per mass of water means less available water for pathogen metabolism (see chart below for ratios) - a 'water activity' value of 0.92 is generally recognized as inhibiting C. botulinum, and 0.85 for shelf stability where pathogens and most spoilage yeasts and moulds will not grow. These values are for just the effect of water activity, as added acid will also provide inhibitory effects.

Diabetic-friendly sweeteners would not have the same effect on water activity as their usage masses are much lower due to their sweetening powers being significantly, often magnitudes, greater than sucrose - very little sweetener is used with most of the bulk as solubilising aids and anti-caking agents.

Steeping the aromatics in just water alone will yield the equivalent of making a tea with those ingredients.

For mint, lemon leaf, and basil specifically, the aroma compounds are more soluble in an oil or alcohol-based carrier and are usually sold as such. The issue for your scenario would be resolubilizing the compounds in water-based beverages. Some manufacturers will have water-soluble formulations, ie. Amoretti's basil extract: https://amoretti.com/products/basil-extract-ws 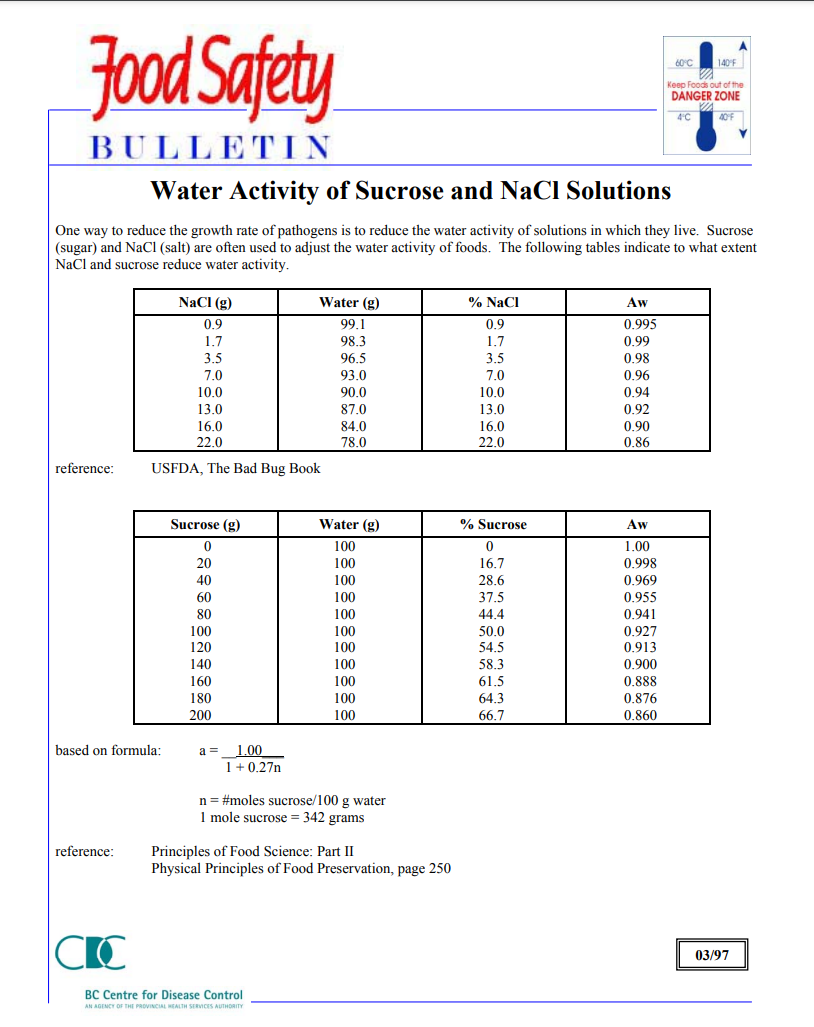 Water Activity of Sucrose and NaCl Solutions. From: https://ucfoodsafety.ucdavis.edu/sites/g/files/dgvnsk7366/files/inline-files/133655.pdf

7
difference between glucose syrup and sugar syrup?
4
How do you make golden syrup?
9
Can I substitute Glucose Syrup for Sugar in cake recipes?
1
Substitute sugar free maple syrup in baking?
3
Holding sugar syrup at a consistent temperature
2
How to stop sugar syrup from crystallizing?
0
Will different kinds of sugar or coffee affect coffee syrup flavor?
5
How to preserve herbal syrup or herbs that will be used to make syrup?