When whipping cream, what is “custard-like consistency”?

I have a 1934 Borden pamphlet with a recipe for Frozen Egg Nog. The directions say to “whip [½ cup whipping] cream to custard-like consistency” before folding it into the mixture as the final step. 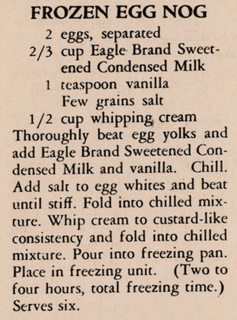 Not only have I never seen this phrasing before for whipping cream, I have whipped a lot of cream and never have I seen it reach a consistency that I would call “custard-like”.

I’ve done a search on the phrase "whip cream to custard-like consistency" and found several vintage recipes that use it, such as the 1934 Peppermint Stick Ice Cream from The Library of Congress’s Cool off this July with Vintage Ice Cream Recipes!

I’ve done a Google search on "Frozen Egg Nog" "condensed milk" and found some recipes, all old, but none that call for either that consistency or even condensed milk.

They all just say to add (or fold in) the cream, whipped. Which is what I plan to do if I can’t find any evidence otherwise.

What does “custard-like consistency” mean in the context of whipping cream? Perhaps custard meant something different in earlier cooking eras?

The answer appears in another Borden cook book, the ca. 1942 This is My Book of Magic Recipes on page 3 under “Hints for making Ice Cream in your Automatic Refrigerator”:

The same terminology is used on page 16 of Borden’s 1935 Magic Recipes: Quicker, easier, surer to succeed:

Please note that you don’t whip the cream stiff—just to a foamy, fluffy thickness.

A similar instruction appears in several recipes in the 2016 British Recipes Series’s Desserts and Ice Creams; an apparently more modern cookbook that dispenses with the phrase “custard-like consistency” and simply says to:

Whip the cream to a foamy, fluffy thickness…

Based on @rumtscho’s comment to the question, it appears that they were referring to one end of a very wide variation in custards as being “a variety of culinary preparations based on sweetened milk, cheese, or cream cooked with egg or egg yolk to thicken it [which] may vary in consistency from a thin pouring sauce (crème anglaise) to the thick pastry cream (crème pâtissière) used to fill éclairs”.

Speculatively, the use of “custard-like” to describe the desired consistency probably never caught on because of that wide variation in consistencies, as indicated by later Borden publications having to define it. The definition, “foamy, fluffy thickness” is almost as short as “custard-like” and both more descriptive and more precise.