How could I keep one-ingredient “ice cream” soft?

According to this question, guar gum and xanthan gum can be used to keep ice cream soft by preventing ice crystals and keeping the air that's been mixed in from leaving the ice cream.

We have tried making one-ingredient banana "ice cream" by freezing bananas for an hour and then mixing them in a blender. It creates a yummy banana ice-cream-like pudding. (I put ice cream in quotes, since there's no actual cream.)

However, if you try to freeze the results, you get a mess full of ice crystals and losing the appeal of the original dessert.

Could additions like guar and xanthan gums help to maintain that yummy texture over time? If so, since I've never used them, I'd like some help figuring out how to do so.

Thinking about this from first principles, a banana is about:

The anti-crystallization effect of guar gum works on the water component, so adding a small amount of guar gum actually should be of some benefit. The hard part is getting it all dispersed; you don't want to over-process the banana (you'd lose the creaminess) but you also need to hydrate the guar gum in order for it to work its magic. You also need to avoid over-thickening, which might be difficult even with the very small starch content in a typical banana.

Bananas convert more starch to sugar as they ripen, so I suspect you'd have more success trying this on very ripe bananas that are, essentially, little more than sugar and water to begin with.

Incorporating and maintaining air is something that I just don't think you're going to be able to do. Proteins and fats can both participate in foaming (egg whites being an example of the former, and heavy cream being the canonical example of the latter), but bananas have neither of those. There's simply nothing to whip, and thus nothing to stabilize, so neither xanthan gum nor any other emulsifier/stabilizer is going to do you much good here.

If you really want to incorporate air then you're going to need more than one ingredient. My instinct would be to say coconut milk, which has relatively high fat and pairs well with banana (and obviously is also vegan / non-dairy), but I can say from experience now that coconut milk just doesn't have enough fat. You could try cooking it down first to get the fat ratio up, or using coconut oil, but I'm not sure how it would taste.

Traditional ice cream is about 60% water, which means the amount of guar gum that most people seem to get the best results with (about 1 tsp/qt) is about 0.87% of the total water. For a small (100 g) banana, that's about 75 mL of water corresponding to very close to 1/8 tsp of guar gum.

So, I'd give this a try with 1/8 tsp of guar gum, forget the xanthan gum. Try adding it after you've frozen the banana for the first time, when you first pop it into the blender.

No guarantees, but, you can probably afford to waste one banana in the attempt.

I thought I'd give this a try myself since (a) it seemed pretty easy and (b) I can always use more non-dairy dessert recipes. Here's how it came out with 1/4 tsp of guar gum for 2 bananas, after being frozen for two days: 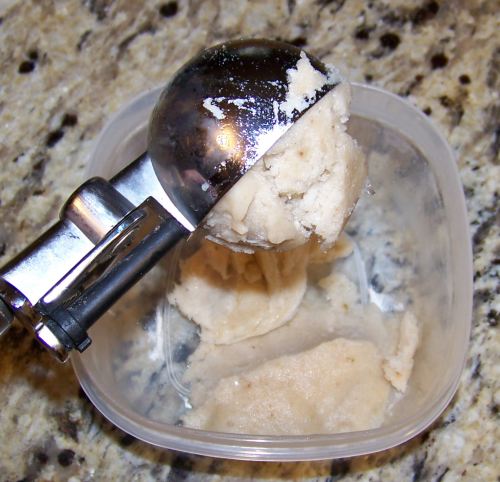 You can see that ice crystal formation is pretty minimal, and although some parts did harden a bit (much like ordinary homemade ice cream with low overrun), they returned to normal consistency within just a few minutes.

Of course it still tastes like frozen bananas, so if I were to do this again I think I'd probably try adding a few other flavours. Also note that even though the texture is decent, the colour is getting dark, and I have no doubt that this would eventually turn black after enough time in the freezer - and the lemon juice trick doesn't really work so well when the whole thing has been blended up.

Not the answer you're looking for? Browse other questions tagged food-science dessert vegan bananas or ask your own question.

45
Is there something I can do to keep ice-cream soft?

5
How can I flambé ice cream?
4
How to make creamier and softer vegan coconut ice-cream?
6
How to make soft popsicles
1
Vegan ice cream has chalky texture
0
How can I remove the greasiness from my ice cream?
5
Improving texture of yogurt based ice cream- stabiliser?
2
ice cream with alternate sweetener
5
Custard vs raw eggs in ice cream
0
What do you make of these ingredients in Ice Cream?
1
Unsweetened or fruit sweetened ice cream - Replacement for sugar in ice cream?