How do you cook pork chops without drying them out?

Every time I cook pork chops, they come out dry even though I only cook them to 150 degrees. I broil them btw, like they said to at the store. Is there a way to prevent this?

First, the recommended minimum cooking temperature for pork is 145 so you can cook them a little less than you already are. Also, keep in mind that meat continues to cook after it is removed from the pan/cooking element. The residual heat will produce what is known as "carry over cooking" which can range from 5-15 degrees, depending on the size of the item and how long it sits. Pork chops aren't going to continue rising as high as a large roast that has a greater amount of residual heat built up.

Also, it is very difficult to get an accurate reading on temperatures for chops and steaks with a thermometer so it's really best to learn to determine doneness through touch. For pork you're looking for a medium doneness so touch your middle finger to your thumb. That will contract the fleshy part between the thumb and index finger on the same hand. Poke that with the index finger from your other hand. It should feel somewhat springy with just a little firmness. That's how your pork (or medium-done steak) should feel when it's ready to be removed.

As for other things you might consider....Brining will pull moisture into the pork so that it's less likely to dry out during the cooking process. A brine is a mixture of water, sugar, and salt. Additional flavors may be added but this would be a basic moisturizing brine. Through osmosis, the liquid is pulled into the cells of the meat. As the meat cooks it retains it's juiciness due to the fact that salt helps to retain water. The flavor is enhanced through any seasonings that were also introduced to the brine as they will be carried into the cells of the meat as well.

Basic Brine: 1 qt. water, 1/2 cup kosher salt, 1/2 cup sugar. Add the sugar and salt to the water and stir until dissolved. Submerge meat in brine and refrigerate if brining for an extended period of time. Plan on about 1 hour per pound of meat.
When you're ready to cook, remove the meat from brine, pat dry and then season as you normally would and rub with a little oil before broiling, grilling, searing, etc.

I hope that provides some help!

I've found that a thicker pork chop retains moisture better than a thin one. The standard thickness in a supermarket seems to be a 1/2" cut. Go for 3/4" to 1" cuts. Another trick is giving them a good buttery/oily sear in a pan prior to roasting. This crust helps to keep the juices in while in the oven. Low and slow in the oven is the way to go with a seared pork chop.

I don't know what 145 equates to in pork, but I go for a medium to medium-well pork chop. Well done pork is worse than well done steak.

Also, just like steak, let your pork chop sit under a tent foil for a few minutes after it comes out of the oven. If you go hacking into it immediately you'll be letting a lot of the juices escape.

Brining and other marinades as others have suggested are also good methods that can be used in combination with my suggestions.

Finally, a thicker cut pork chop opens the door to a wonderful little piece of gastronomic bliss, the stuffed pork chop. You can really go wild here, but further details belong in the answer to another question. :) 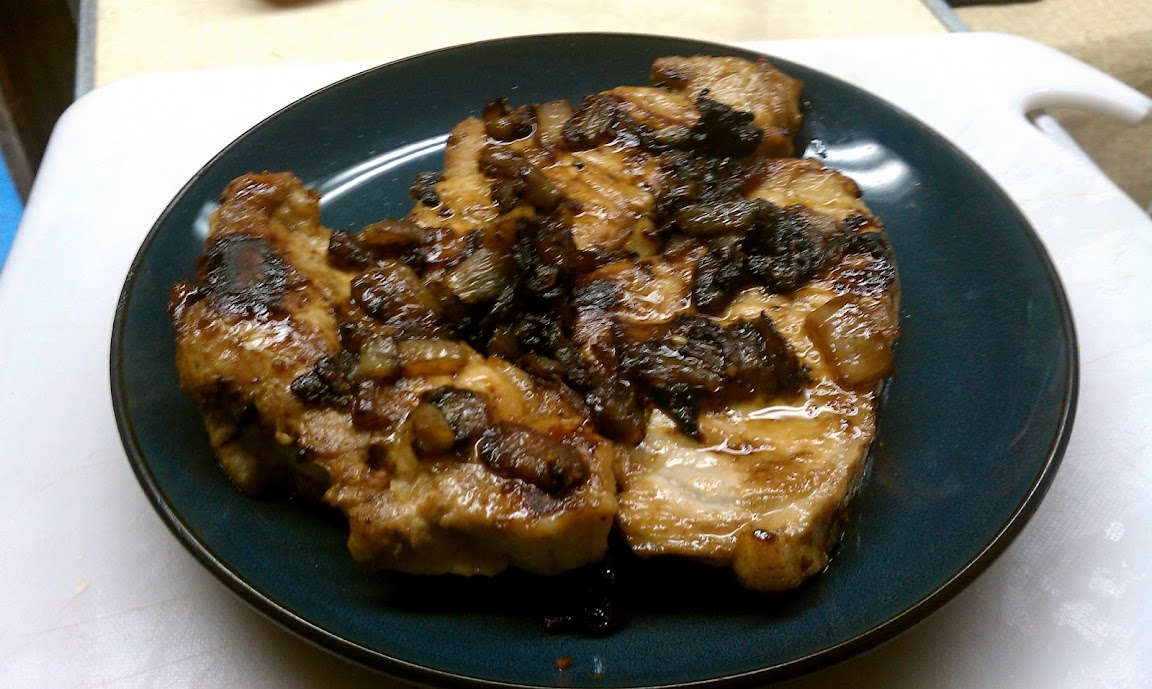 Tender pork chops depend a lot on cooking method. They are a very lean cut of meat, so they have a tendancy to dry out very quickly. Brining will work very well, and you could also try placing them in a deep sided dish with about a 1/4 inch of liquid in the bottom (any liquid, but I normally use some thing that has a little fruit to it, like a cheap white wine) and cooking with some tinfoil over the top. It makes a sort self regulating braise. Cook in a 325 oven for about thirty five munutes.

Also, you can head down south and bread and fry them. A well seasoned flour breading and a quick pan fry will come out really amazing.

I'm using Cook's illustrated Meat book's recipe. I says to bake seasoned, room temperature chops, at 275 degrees until the digital meat probe reads 120 to 125 degrees. Then you take them out of the oven and fry each side in an oiled, heated to smoking, frying pan until the outside is crispy. Lift them halfway through the frying to distribute fat underneath each chop.

Searing the chops before baking tightens the meat and forces the juices out, rather than keeping them in. For thick chops seer (fry the sides too. It's not necessary to cook all of the pink out of the middle of the chop. That just drys the meat. Browned chops should register 145 degrees tops.

I never let my chops rest either. Who wants tepid meat?

You might want to seek out some chops from a heritage breed of pork at a local farm or farmers market. The pork you buy at the supermarket has been bred to have almost no fat, which includes the fat within the meat. Without that intramuscular fat, meat dries out when cooked.

I love a good pork chop. Personally I have turned to just quickly browning them and then finishing them off by baking them in the oven. Takes a while longer, but produces excellent, succulent results.

Here is a tried and tested recipe for oven baked pork chops with a porcini topping if you want to try.

Regardless of the method of cooking, the reason that pork is too dry 99% of the time is overcooking because people think it has to be cooked to 150.

While I agree with Darin that a thermometer can be difficult to use with chops, you should still use one (although, you need an evenly cut chop, and should test in two places, one near the bone). A thermometer is still the safest way to tell if the chop is done.

Not the answer you're looking for? Browse other questions tagged pork-chops or ask your own question.