How do you make a cake lift equally and minimize doming?

Some time ago, I baked a cake (Sachertorte to be exact). The taste and texture was fine, so my recipe is okay.

My biggest issue was the shape. In the middle it was really a lot higher than on the sides. I would like to redo it in the near future, but preferably with a flat(ter) surface. (Especially since I put icing on top and I don't want it to drip off this time.)

Anyone knows the cause of my problem, or even better a solution? I think I put enough butter on the side of my springform pan, in case this is an option.

Why the doming happens

The pattern you are seeing means that your cake gets hotter on the sides than in the middle. The sides get set early and stop rising, while the middle is still soft and continues rising.

This happens because the walls of the pan conduct heat to the sides of the cake quicker than heat is conducted inside the cake. You see the phenomenon in an exaggarated form in a muffin, which is usually higher than wide: it is always rounded on top, and often split, because the liquid core from the middle continues to rise after a crust has formed on the surface. 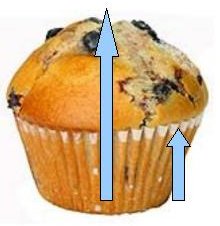 How to prevent it

All methods I described should attribute to a solution, but probably none of them will be sufficient by itself. You'll have to pick a combination of them and see what works best for you.

You should also apply all the usual methods for getting a good cake:

These techniques ensure a better batter texture, which means a more even heating. They will also ensure a more consistent leavening process because:

Not following these techniques is more likely to result in a lopsided cake or a big bubble. I realize that this hasn't happened in the case you describe, but it would be too bad to get an asymmetrically risen cake after you took all the precautions against a disproportionally rising center.

I have never baked a cake that hasn't risen more in the middle than around the sides. Nor, I am almost certain, has anyone else.

The problem is just uneven rising because of when the different parts of the cake cook. The solution is to insulate your cake pan.

You can wrap your cake pan in a damp tea towel (reserve one or two just for this purpose) or there are special insulated strips that are sold specifically for this by baking supply stores. Basically it insulates the outside part of the cake and the whole thing rises more evenly.

You might also want to tap your pan to distribute batter evenly and remove air bubbles before putting it in the oven, but this on its own is unlikely to get a flat cake.

Use towel strips! http://judyscakes.blogspot.com/2011/01/making-cakes-rise-evenly.html I cut mine to fit around the pan evenly and pin together.

I've read somewhere that if it's domed slightly, once you take the cake out of the oven, straight away push the dome down ever so gently with a kitchen towel. This will release any air that's built up in the dome. It works if the dome isn't very high.

my cookery teacher always told me to scoop out a hollow in the centre and spread it to the edges. That way the centre is playing catch up. If you still have a dome you can compensate with icing/ slice the top off or turn the cake over. The latter works especially well for a fruit cake that will be fully iced. Turn over and fill gaps at bottom with marzipan before covering the whole cake.

I stumbled across this page about uneven baking of cakes. I bake about 2-3 cakes for special occasions each week. Doming can be a real issue so to ensure an even bake I use bake even strips. I attach an Amazon link where I purchased mine from but I am sure you can find them elsewhere. I bake 6, 8, 9, 10 and 14" cakes in aluminum pans 2" deep which I line with paper and a cake release oil. I use a rule that any sponge should be no more than 2" deep to allow the outside to cook in time with the middle. Any deeper cakes can result in an over bake on the edge to ensure a bake in the center. If there is a small dome in the middle of the cake I would always slice this off to give a flat top but I have found this to be minimal. The bands are soaked in tap eater prior to use (do this while making the cake batter), gently squeeze excess water and the wrap around the tin. I bake sponge cakes at no more that 150C (300F or Gas mark 2) on a low shelf. So basically a slow low temp cook but check you oven temp as they vary so much!

Before cake is completely cooled, invert 1 of the layers. This becomes the bottom layer of your cake. Ice as you like then add second layer but DO NOT INVERT. This gives you the attractive slight doming effect without the cake breaking or cracking. I have done this for years without a problem. Hope it works as well for you as it does for me.

Haven't tried it with a Sacher, but encountered the doming problem with cheese cakes. In baking those now, I cover the spring form with heavy aluminum, fill a pan, larger than the spring form, with luke warm water, set the spring form in the water and bake. The results have been excellent with virtually no doming after the cake has cooled. Now that you gave me a better understanding of how and why doming occurs, I'll be trying the same method with a Schwarzwaelder Kirschtorte in a couple of days and see how it does. Pete

Ok, I am late coming to this question, but the simple solution is to turn the baked cake OVER. you get a flat top by making the bottom become the top. Once it has been iced it doesn't matter....

2
How can I prevent my honey cake from splitting open?
2
How do you minimize cake doming?
1
Why does my cake rise more in the center?
1
How to keep the surface of the cake from splitting?
15
Making cake icing look professionally smooth
8
How to trim a cake so it's level?
8
Correct way to join two halves of sponge cake?
6
Why is my cake rising sideways while baking?
6
How to achieve a super leavened cake as the Pierre Herme ones?
3
Will newspaper covering a cake pan catch fire in the oven?
See more linked questions