How to make a small DIY bain marie?

I live alone and almost always cook just for myself. With most recipes, I can just cook a smaller amount than given in the recipe, and I have optimized most of my cooking gear for small quantities. But I have a problem with some dishes which are both too rich to eat more than one, maximum two portions in a day, and too perishable to store for longer. Some of those, like the egg foams (zabaglione, hollandaise) and some sweet dishes involving melted chocolate, require a bain marie.

I don't have the storage space for single-purpose gear. When I need bain marie, I use a regular pot and a Pyrex bowl whose upper diameter is somewhat bigger than the pot's. My smallest pot is 16 cm, and a bowl which fits on it is too big for one or two yolks. When I try beating them, they smear themselves on the walls and cook there before they've flowed to the bottom. Also, the heating is somewhat quick, because the whole mass is only 1 cm thick or less. Making 40 g ganache is no easier.

I prefer beating such small amounts in a tea cup or mug or in a 6 cm bowl, inserting a single beater into the mixer. But I cannot do it when I need a bain marie, because I have no pot where they'd stay on top. And even if I could find a small replacement for the pot (like a steel mug or a djezwe), it won't heat on my induction hob - even if the "pot" was ferromagnetic, the hob has a built-in protection and only switches on if it detects a cooking vessel at least 12 cm wide.

Do you have any ideas for an easily built bain marie setup which is small, uses common utensils (not necessary kitchen ones, but preferably something I already have), and quickly dismantled when not in use? Maybe there is some way to suspend the tea cup into the big pot and hold it firm despite the mixer's force?

OK, this is an ancient question, but the biggest issue is the induction aspect. No one appears to have suggested using an induction adaptor to allow the use of a very small pan, like a Turkish coffee pot, for the bottom part. That would get you down to about 10cm diameter, with a small Pyrex bowl or wide cup (cappuccino cup) on top.

Convection from the induction adaptor heating the upper bowl shouldn't be too much of a problem, though the adaptor plate would get rather hot. Bialetti's at least is clearly designed for pots smaller than the induction ring.

This adaptor plate would seem like a useful tool to have, but if you have a non-non-stick induction-compatible shallow pan that would also work, with the cezve inside it. You may, for example, have a cast iron frying pan you'd use for dry-frying flatbreads (I do, anyway), and that use would be similar in the sense of heating it dry.

Alternatively I'd make a frame from stiff wire, to allow suspending a small bowl over a larger pan. Personally I'd use stainless steel bicycle spoke, as I have plenty. They don't touch the food itself after all. Coat hanger wire might also be stiff enough. Either could be formed into the right shape with bending, using twisted joints (requiring two large pairs of pliers). Aluminium foil could be used to avoid steaming your hand.

Do you have a pot with a small diameter, i.e. 4-5" (the kind that typically falls over from the weight of the handle)?

If so you can do your double boiling in a saute pan or whatever (the small pot held, probably at an angle, over the saute pan full of heated water), but you will be hands on the pot the entire time. It's not the worst skill to learn; and learning new skills neither costs money nor requires storage space. 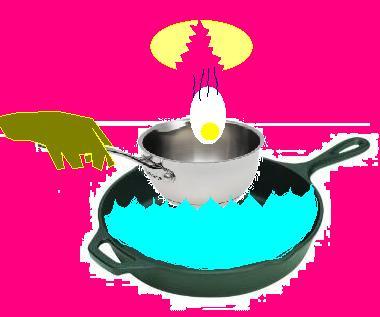 Can you repurpose a stovetop coffee pot/percolator? I prefer the glass ones (do an image search for 'coffee percolator glass', so you can keep an eye on progress throughout. If you were to replace the drip container at the top (that usually holds the coffee) with a small stainless steel bowl (your standard IKEA type mixing bowl), the rim will be held stable by the coffee pot.

Plus it already has a handle built in so you don't burn yourself in search of the perfect chocolate ganache!

ps: I'm in Germany too - I saw some at Tchibo last week.

For such small amounts, does the pot of hot water really need to be on the stove the whole time? If not, you could use two glass bowls the same size that stack. Put down a dish towel, then a bowl, pour in lots of rolling boil water (ok not lots, practice with cold water how much you need), then the second bowl, in goes your egg yolk or whatever, and beat away. You can hold the stack steady with a silicone thingy if the dishtowel alone isn't cutting it. Obviously this is a no-go for something that needs to be gently beaten over simmering water for 15 minutes, but for some of your recipes it might work.

It doesn't meet your criterion of something you already have (or the answer would have occurred to you already), but perhaps a aebleskiver pan or a poaching pan would do the trick.

If you already have them, this might work. You can use a small Pyrex measuring cup (the 1 or 2 cup size) with a handle hooked over the edge of your pot. The type I linked to has a handle that is essentially a hook already, so it might work.

In addition, have you considered simply letting your bowl rest on the bottom of the pan rather than suspended? (I don't know if it's reasonable, but it might work.)

You just need to add another bowl, and a second layer of water. It won't be quite as responsive, but you add some hot water to the bowl above the pot, and then place a smaller bowl inside it.

So, you have stacked up:

If you have a pyrex measuring cup, like Martha mentioned, I'd use that for the upper bowl -- it gives you a handle to hold onto while mixing. A coffee mug might work as well; something so you don't have to put your hand into the hot water of the lower bowl. (although, you can also put in less hot water)

Some time has passed since I posted the question, and I have a solution which I use often.

I did, after all, buy a small bowl intended specifically for bain marie. 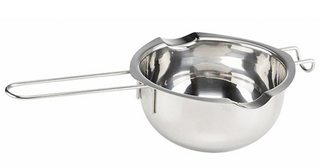 It has a useful size, maybe 250 ml, and the long handle on one side and hook on the other allow it to be suspended over a standard pot. Even in a small kitchen, it stacks well on top of small pans, and the rounded bottom with convenient handle it useful as an all-purpose stirring bowl, so the usefulness/cabinet space ratio is good enough for me.

4
DIY blender lid replacement
10
Removing ramekins from a bain marie
3
In how much water do I need to put ramekins when cooking au bain marie in the oven?
11
Does the type of strainer built in a teapot matter?
2
What "all-in-one" single serving tea device(s) are sturdy, make "teapot quality" loose leaf tea, and are two pieces or less?
3
Should I get the small or large size of a pour over brew device when I'm only brewing one cup? (eg. Hario V60, Woodneck)
3
Some stainless steel more stainless than others
7
How fine is "Fine Mesh" for removing lumps from custards?