What is the egg mixture used in gratins called in English?

This is one of these weird cases of synchronicity. I was wondering today how it is called in English. Then I answered a question, and needed the word for the answer.

The dishes I mean may not always be called gratins in English, sometimes they are called stew. They are a mix of diced vegetables and sometimes meat, mixed in a pan and put in the oven. When they are cooked enough (or when using parboiled vegetables), a mixture is poured over them. The mixture consists of eggs, a very small amount of flour, and one or more milk and fermented milk products. Soft or grated cheeses are sometimes mixed in or strewn on the surface to brown. The vegetables aren't swimming in the mixture, some of it seeps between them to fill the air pockets, but it mostly stays on top and sets and browns nicely.

I have only encountered this kind of dish in Mediterranean recipes. Typical examples are moussaka, ratatouile, gyuvech (although I know variants of all of them which don't have the mixture). In Germany, they'll be called a type of Auflauf, but an Auflauf is not necessary made with this eggy type of liquid, and I haven't heard a German name for the liquid either.

I wouldn't call it custard, as it is mainly used in savory dishes (although there are sweet variants where something else than vegetables is baked). Also, I haven't heard of custards without milk or cream, and these often contain something else, e.g. a mixture of yogurt and mashed feta. It isn't a batter either, the flour isn't enough to thicken it noticeably, and can sometimes be left out altogether. It is not a sauce, it is expected to set after baking.

Of course there is a probability that there isn't a name for it in English, because it isn't used often in English speaking countries. In this case, probably everybody could make up a well-sounding combination to refer to it, like "the egg mixture for moussaka crust". But I am not interested in such descriptive creations. What I am asking is, is there a single term which, when I say it without further qualifications, as in the sentence "I am making a [term]" will let my communication partner understand that I am cooking a dish of this kind and currently preparing the mixture for it.

Edit I don't mean a word which describes the content of the thing (although such a word would be nice too, if it were used only for this type of liquid and not for other liquids with similar content like custard). I am expecting something more of a purpose-based word. A comparable word would be "topping": A topping could be smoked ham or caramel sauce, depending on the dish. But it always has the same function. In this regard, I'd say that bechamel can be used as [term] sometimes, as in mfg's answer. But I wouldn't think of bechamel when I say the word. They are definitely not synonyms. "Custard" is problematic for the same reason: it has many other uses.

I would call it a custard, I think, if not only for want of a better word. A custard consists of milk, egg and a thickening agent i.e. flour, so it fits the description well enough.

It might sound a bit odd to English-speaking ears though. I think 'savoury custard' is probably more appropriate. I must admit I always thought moussaka et al was topped with a white/bechamel sauce; I'm pretty sure that's the more common topping in 'the West'.

As for the dishes themselves, I'm not sure if there is a catch-all English term for them - 'pasta bake' is an English version of the Italian pasta al forno, but that obviously only applies to dishes that use pasta.

Is this what you're describing?(potatoes au gratin are possibly a bad example since it's only using one ingredient for the stew, but I'm just referring to the style of cooking the ingredient); if so Americans use 'gratin'. Also, I'm confused as you say moussaka is an example, but that what you're referring to doesn't use flour as a thickener (which is a constituent element of the moussaka's bechamel).

Based on the other question it seems like one could suggest bechamel, which is used in moussaka (Greek versions) if I understand what you mean correctly. The problem with this guess is that many bechamel recipes do not have eggs (however some Greek ones do). 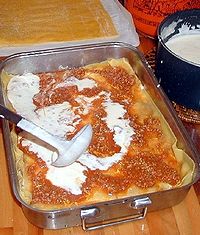 Custard is used in lots of places from quiche to crème caramel. If you haven't tried moussaka made with a cheese custard topping it's really really good. My mum somehow gets it really light and fluffy (I have to get her recipe).

I'd personally just call it a 'white sauce', due to the flour + milk, although many people will often assume that 'white sauce' is specifically besciamella / béchamel, which uses a roux and no egg.

I could see calling it a custard, as that's what it'd be called if used in a quiche, but I'm not used to using starches in custard. It might be a local thing ... I'm used to them being much heavier in the egg department.

If there were sugar in it, it'd be a pastry cream, although, you don't often see the term in everyday use the U.S.

Not the answer you're looking for? Browse other questions tagged eggs language or ask your own question.

5
What could be used as a savoury custard to serve with a savoury jam roly-poly?
3
Why did my Crème Fraiche split?

5
What could be used as a savoury custard to serve with a savoury jam roly-poly?
5
What do you call a scrambled omelette?
9
What are "fondi di carciofo" called in English?
2
Culinary term for non-flavor defining ingredients
1
Is "krapfens" commonly used to designate donuts?
10
English term to describe "kompot", an Eastern European beverage made from berries
6
What is the term for "plain" non-flavored ice cream
3
Is there an English word for the Spanish pepper called Ñora?
4
What happens when custard ingredients are reordered?