Why did my tomato soup turn thick and brownish?

I tried to improvise a tomato soup following these steps:

The result was quite bad: the soup thickened (a bit like jelly) and turned red-brown, rather than fresh red.

One of the first things I learned in Indian cooking is that the combination of tomatoes, onions and ginger is self-thickening. As time went by, I realised that the thickening effect is far more noticable with old varieties of tomatoes - "beef" tomatoes and a lot of the modern varieties are difficult to thicken unless partially fried first.

Despite the absence of ginger, I suspect that the thickening is purely a natural action between the tomatoes and the onion, and that the tomatoes used were some particularly nice old variety.

I think that this must be some freakish ocuurence. The way you describe it, there isn't anything you did wrong, unless maybe if you have been throwing in spices by the handful.

Tomatoes (incl. skins) don't contain anything thickening. In fact, when you want to thicken a tomato puree, you are in for hours of constant stirring over gentle heat until most of the water has evaporated. It's still not jellylike after that.

They shouldn't turn brown either. Carotenes are not terribly heat sensitive. Some of them will degrade, dulling the color somewhat (you can't keep the color of raw tomatoes), but the change won't be too big, it should be still more red than brown. That change won't be affected by oxygenation anyway, so lemon juice won't help. In my experience, enzymatic browning (which is affected by oxygen presence) just doesn't happen in tomatoes, you can leave a cut tomato exposed to air for days, and it won't brown the way apples or avocadoes do.

You could be experiencing some browning due to a Maillard reaction, but tomatoes are low in carbohydrates, so for this to produce any significant browning, you must be terribly overheating it. And by "terribly overheating", I mean it's one step removed from charring.

The practice supports this, here is the color you can expect from tomato puree which has been cooked for a while: 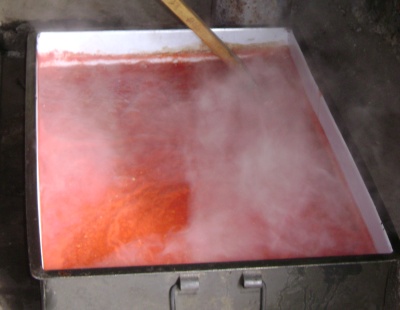 Garlic tends to turn blue-green when cooked in the presence of acid, and the combination of red and green should look brown, but if it affects color significantly, you are using way too much garlic. If you insist on using lots of garlic, you can try adding canned garlic after the tomatoes have been cooked, before the pureeing, or adding garlic powder to the prepared soup.

The only thing on your list which could have thickened is the pepper. Again, you must use powdered dry pepper it in amounts comparable to the chille powder in chilli dishes in order to experience a significant thickening. If you do this, and insist on this amount for taste reasons, but want a thinner soup, you just need to make it more dilute. First, don't remove the seeds of the tomatoes. Second, consider using fresh peppers instead of powder (either pre-roast to charring and remove the skin, or sautee to soften together with the tomatoes without removing the skin). Third, if all else fails, dilute with vegetable stock or some other liquid (commercial vegetable juice, whey, or herbal tea).

If you didn't overuse garlic and/or pepper powder, but the problem persists, there is something wrong with some of the ingredients. Try tomatoes from another source or something. But chances are that it was a one-time problem.

the skin is just unpleasant, because as the tomato cooks it separates from the flesh and turns into little plasticky bits. The gelifying stuff is in the tomato flesh, can't avoid it. If you insist on the fresh taste, I would suggest that you do your soffritto sautè, add purèed peeled tomatoes, simply let it get warm and serve. If you keep it on the fire, it will start tasting concentrated and "cooked" and it will turn into a basic spaghetti sauce (dark red, indeed). You could also consider looking up gazpacho http://en.wikipedia.org/wiki/Gazpacho - it is a fresh tasting tomato soup served cold. Very tomatey.

I had a similar but weirder experience. I browned my beef added tinned tomato sauce onion a little garlic and oregano. As it simmered it got darker and darker til a very dark walnut brown. All I can imagine is the pan had once been burnt badly and that somehow affected it. All other ingredients were use safely before.

Avoid the blender, use a sieve, mouli if you must, or just mash gently with a fork

I would slowly grill the tomatoes until they get a deep red colour, and then puree them to make the base of the soup

I leave the skin on, it does not change the taste, in fact it adds to the taste as they get quite dark under the grill, and they clearly mark the soup as home made

Go easy on the onions and garlic (that's more for gazpacho). Tomatoes are already quite acidic, you don't need any more acids or you'll end up with tomato sauce!

Some people use milk (or water plus butter or cream), blue cheese, or beer

9
What is the name of this chicken soup dish?
1
Tomato skin in roasted tomato soup?
3
How to prevent my roux from sticking to the bottom of the pan?
0
Troubleshooting: Kitchen Sink Vegetable Soup
1
Should I add vegetables and spices in the stock-making stage of pig-knuckle soup?
14
Why did my chowder turn out watery?
6
Structure of tomato, ginger and garlic after blending in a blender
7
Could overfrying and/or undersimmering the Spanish rice have caused it to develop a cardboard-like taste and a pungent odour?