What is the conversion rate between plum tomatoes and "regular" tomatoes?

I have a recipe that calls for 12 plum tomatoes (seeded, skinned, and pureed). Can I substitute regular tomatoes, and if so, in what ratio should I substitute them?

Here is a picture of what I mean by "regular" tomatoes: 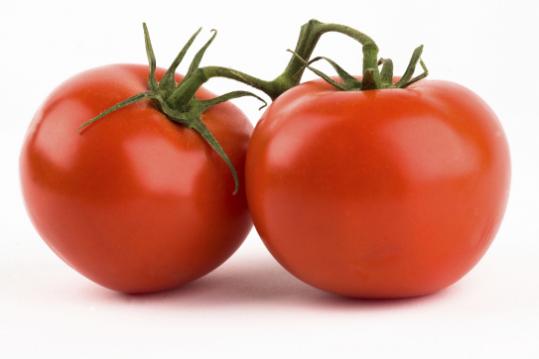 The tomatoes pictured are known as slicing or globe tomatoes. The conversion rate is going to depend significantly on the size of your slicing tomatoes.

I'm not sure what your recipe is, but you should be aware of two properties of plum tomatoes. First, they have a much lower water content than slicing tomatoes. This makes them great for stews and sauces. Second, their seeds are rather bitter; this is likely why your recipe calls for them to be seeded.

If you're using slicing tomatoes you can omit seeding them if you desire. You'll also want to cook them longer to address the higher water content.

What would honestly be a better option is to simply use canned San Marzano tomatoes. These are widely considered to be the best tomatoes for sauces. Plus they are canned at the peak of freshness, allowing you to have ripe tomatoes year round. Fresh tomatoes bought outside of summer are often lacking in flavor.

Not the answer you're looking for? Browse other questions tagged substitutions tomatoes or ask your own question.

8
How can I replace canned tomatoes with fresh?
11
Substitute fresh garlic instead of garlic powder?
7
How can I cut lots of cherry tomatoes in half quickly and evenly?
0
What is the difference between liquid and powdered pectin?
5
Differences between canned and fresh tomatoes
1
Substituting Diced Canned Tomatoes for Fresh
7
Using Canned San Marzano Tomatoes Vs. Regular Canned Tomatoes
4
Dried tomatoes vs. dried tomatoes in oil
5
Canning tomato sauce for the refrigerator
8
What is the difference between molasses and treacle?