My sourdough starter is bubbling but not rising, suggestions?

I've been trying to grow my own sourdough starter; I went with a 'pure' method, with 50g each of hard-wheat flour from a local mill and water. I've fed it once and it seems to be bubbling nicely after a couple of days, and the taste is nice and tangy, but I'm not noticing the increase in volume that I would expect. The area I'm in (the Pacific NW) is still fairly cold (the interior temp in my house is probably mid- to upper-60s) so I suspect that could be a factor, but at what point (I'm about 4 days in now, including a second divide-and-feed pass a day or two ago) should I start to expect any real vigorous expansion out of the starter?

dough bread sourdough starter
share|improve this question
edited May 27 '11 at 18:10

If the starter is "bubbling nicely" then you may be already there.

Bread rises because the CO2 produced by the yeast is trapped by the protein in the dough. If you see bubbles then your starter is already producing the necessary CO2.

A starter has so much water in it that the protein doesn't trap the gas- thus you see bubbles rise to the surface. If you expect your starter to trap the gas and expand then it would have to have more protein. This isn't required for a starter to work.

You should be able to use the starter in a bread dough and that bubbling will turn into rising.

Sourdough is a combination of yeast (which provide rising power) and bacteria (which make the starter sour and keep other nasty things from growing in it).

New starters will usually establish strong bacteria growth long before they get strong yeast growth. The bacteria growth will start within the first couple days, which will make your starter begin to taste sour. Bacteria can produce bubbles too, but they produce so much acid on their own that the bread produced will not rise very well. With a starter that's only 4 days old and has only been fed once or twice, it's very likely that you're still seeing more activity from bacteria than from yeast. (Low temperatures, like those mentioned in the question, will also tend to favor bacteria growth over yeast.)

In my experience, it can take as many as 10-20 feedings with whole wheat flour to establish strong yeast growth, depending on your recipe. With rye flour, I've seen it in only 4-5 feedings under ideal circumstances.

In any case, the "bubbles" you see in a starter in the first few days are primarily produced by acid-generating bacteria. They help to make your starter more sour, which will keep other bad things from growing in it. That's the first step. The second step is regular feedings once the starter has some sourness. The feedings will dilute the acidity temporarily and allow yeast to establish growth.

I wouldn't expect much expansion on a newly cultured starter. Given the high water content it will be very 'slack'. Even my many generations old one doesn't rise much unless I leave it at room temp for an afternoon.

I would continue with the growth pattern you are following, i.e. cut it in half and feed again a few times. There would be no harm in taking the 'discard' each time and baking it up to see what you get. I'd make a simple starter-only loaf like the KA 'extra tangy' recipe and see what you get. 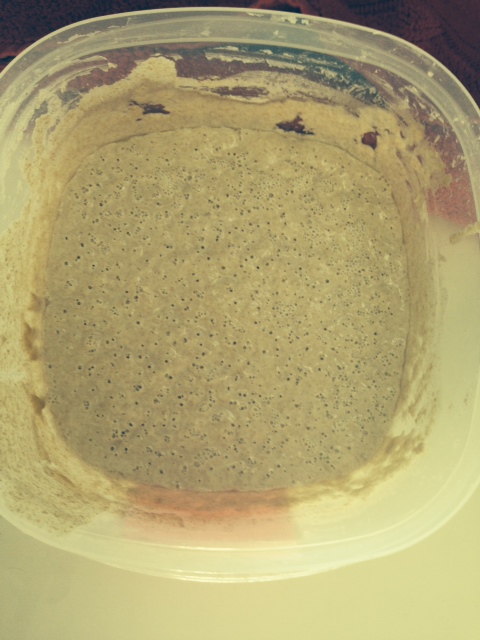 I created my starter 11/06/13. We've had a cold winter here in Connecticut. It took until after Thanksgiving for the starter to be ready to use in any baking. I arrived at this understanding through reading different posts on different websites and also the book I was using by Chad Robertson "Tartine Bread". In the book, he said it might be a matter of days to ripen and I began to think I might have killed it through some error. He did talk about placing a spoonful of starter in a cup of warm water and watching to see if it floats, floating starter in this scenario means it is ripe and ready to use!

I finally came across an article of a t.v.appearance he made where he revealed it could be a full month before one's starter is ready to use. I suspect with winter growing colder, adopting a clear feeding schedule, evening out how I compose the feedings, establishing a feeding time… this all sapped energy form my starter. Eventually, the starter was four weeks old and I was testing it each day. Finally, I could see the samples floating in the water when I would conduct a float test. Occasionally, I would come home from work and see it produced hundreds of bubbles over the course of the day as in the photo above… Give it some time!

I recently started a sourdough culture by mixing warm water with flour, incubating, and feeding it once per day for a week. I used it in a no-knead recipe, and it made a brick that had a few large air pockets but very few little bubbles.

I fed it again for a week and tried again, producing this: 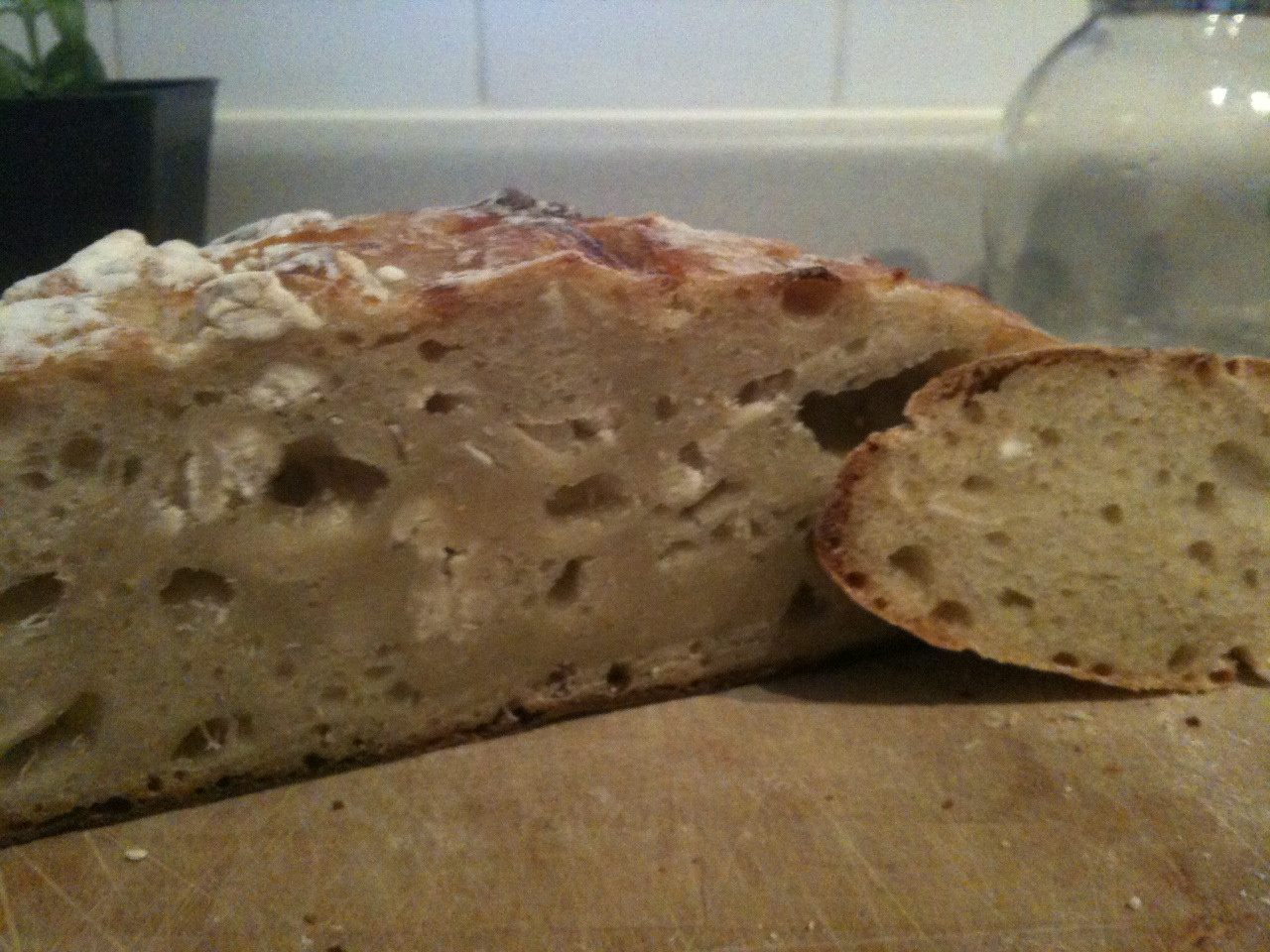 It's a huge improvement, but there are still some very dense parts in the middle, and the loaf didn't rise much overall.

I'm going to keep feeding it and trying this recipe periodically. Hopefully it will improve with each iteration.

Yeah I've just started a new starter and am at the same stage. At the start of the week it was a very sour starter with some bubbles but little rise. I got some improvement when I started feeding it then putting it in the residual heat of the oven - long after i'd used it for cooking dinner and that seemed to promote more yeast action. My last starter took a month before it would be predictable.

Also, while your starter is getting settled. I recommend collecting the discards and making a a loaf with the help of baker's yeast - it gives you a lovely sour and light bread and softens the blow if your first few sourdoughs come out as bricks.

Not the answer you're looking for? Browse other questions tagged dough bread sourdough starter or ask your own question.

1
Why did my Sourdough starter stopped rising?
8
Techniques for making sourdough starter in cold/altitude
11
How does hydration of a sourdough affect baking features?
2
How do you know if your starter is powered mainly by yeast or bacteria?
1
Remedy a sourdough which used milled red winter wheat