Theoretical: why there's no gradient of doneness in bread?

I was always wondering, why there's no gradient of doneness visible on the cuts of bigger breads. For example: 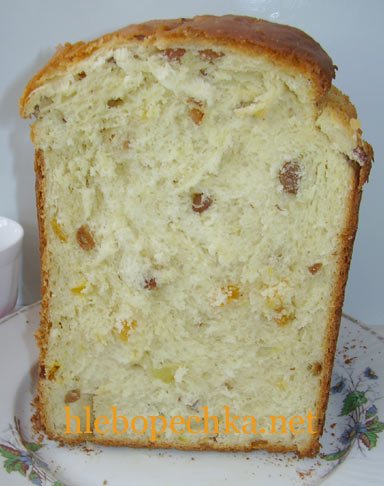 This one was made in the baking form, it has a thin visible crust, but after that the texture is absolutely uniform. How is that happens that temperature is distributed so evenly in the bread mass? Dough is not circulating like liquids do, so I'm puzzled. Could anybody shed the light on that?

Essentially, the exterior crust and the interior evenness are both side effects of the distribution of water.

The Maillard Reaction - the chemical reaction responsible for the brown crust - happens at about 150° C. Generally you're baking at a much higher temperature than this - say 200° C.

The first question one might ask is, why is the crust only on the outside? And the answer is because only the outside gets dry enough; as the small amount of water on the surface evaporates, the temperature is allowed to rise to ambient oven temperature.

The reason it doesn't happen on the inside is precisely the opposite; water boils at 100° C, so as long as there's still water in liquid form (and bread is, to a large extent, water), the temperature can't get any higher than that. The interior of the bread is always regulated at approximately 100° C, and since the baking temperature is uniform, so is the finished product. It's almost like poaching an egg or a piece of meat; no part of it is able to get any hotter than the liquid around it, so the longer you cook it, the more uniform the temperature gets.

If you continued to bake the bread until all of the interior water evaporated into steam, then it would eventually start to undergo the same process as the steam slowly escaped. But we usually don't bake bread that long, so it doesn't happen. As commenter Ray points out, there are some types of darker bread such as pumpernickel which involve intentional "overbaking", but obviously not to the point of burning it.

Note: There may also be a certain element of the process that is due to steam being trapped inside; the water vapor, like any gas, expands and distributes itself fairly uniformly throughout its container. However, the bread is porous, so this steam eventually has to escape; if it didn't, you'd end up with a very damp interior after cooldown from all the condensation. If you measure, you'll also notice that the weight of a fully-baked bread is about 10% less than the original dough weight. So the steam doesn't stick around indefinitely, but the continuous evaporation coupled with the temperature self-regulation (due to the boiling point) keeps the temperature relatively constant.

I may be wrong here as I can't find any definitive answer, but this is probably due to our old friend the Maillard Reaction. This is what causes food to brown - it is often mistakenly called caramelization, which is an entirely different process.

The Maillard Reaction requires surface water to completely vaporize. When you put bread into a hot oven, the water evaporates from the surface rapidly and the Maillard Reaction occurs. This forms a partial 'seal' that prevents too much moisture loss from the rest of the loaf, though this seal isn't perfect - bread still goes stale after a day or two.

Incidentally, it's often thought that having steam in the oven helps form a crust. This is not the case. Steam in the oven in fact prevents a crust from forming, which lets the bread rise more, before the steam evaporates and the crust forms.

When the bread is baking the water in the bread turns to steam that, along with the CO2 from the yeast, inflates the gluten network.

The crust is able to brown because it is exposed to much high heat from the oven air than the interior. If you were to take the bread out early before the proteins had set you would also be able to see a gradient- the dough would become progressively more doughy toward the center.

My suspicion, therefore, is that the steam regulates the interior temperature until all the protein has set- at that point you take the bread out of the oven. If it continued to bake and the steam all escaped you would start to see a more pronounced gradient but it wouldn't be edible anymore.

In my non-scientific experience, the outer portion of the bread is exposed to more heat than the interior but the difference between the two isn't enough to dry it out or burn it as long as there is steam left.

Not the answer you're looking for? Browse other questions tagged baking bread food-science temperature or ask your own question.

15
Why do microwave ovens make bread rubbery?
33
Is “until juices run clear” a valid test for poultry doneness? Why or why not?
11
Why does bread taste raw if you stop baking it and continue after it has cooled?
18
Why don't dry bread crumbs spoil, when bread does?
11
What happens with bread at >= 94˚C/201˚F? Or: Is temperature a reliable indicator of doneness?
7
Why is my bread falling flat?
9
Tiny beads/flecks of uncooked dough all through my bread
5
Why flour on bread?
6
Is core temperature a good indicator of bread doneness
2
Why are bread pans rectangular?