How do I separate egg white?

What are ways of getting only the egg white from an egg? Can it be done after the yolk is broken?

The traditional method is as Rumtscho describes.

I got tired of this method for several reasons:

Now I just crack the egg into my hand (which has been thoroughly washed -- cleaner than an eggshell). I hold my fingers a little apart and let the white slip through, leaving the yolk in my hand.

Regardless of the method that you use you should use three bowls: one for the collected whites, one for the white you are working on, and one for the yolks.

Remember: only dump the current white into the collected whites after verifying that the yolk is whole. That way you don't spoil all your whites with one broken yolk.

It can't be done after the yolk is broken/pierced. But, of course, separating white from yolk requires that you break the egg shell to separate them.

Generally, it is OK to have a tiny amount of whites with the yolks, so you don't have to separate perfectly.

It can happen that yolk gets pierced. If you need the egg whites (e.g. for meringue), don't use the ones into which yolk has bled, even if it is a tiny amount. Dump both yolk and contaminated whites into the yolk bowl (or trash).

If your yolk is pierced and you need the yolks (e.g. for hollandaise) and there is still lots of egg whites with the yolk, you have to continue separating. But if you suspect that you might need the whites pure, just put the contaminated whites from this egg in a separate receptacle (e.g. a teacup) and add them to something which uses whole eggs.

This YouTube video by updowngroupfood illustrates the method nicely, only they crack the egg into two different-sized "halves." For me, it works better when the halves are of equal size.

If by the egg being broken you mean the shell, then yes, of course! If you mean the yolk, it's very tricky. And if you mean after you've dumped the whole egg into a bowl, possibly, but you have to very careful not to break the yolk.

There are probably various ways of separating an egg, but I do it by carefully tapping it on the side of a bowl. Then, I break the egg in half while holding it vertically so that the yolk remains in one half of the shell, letting the white in the non-yolk half fall into the bowl. Then I gently tip the yolk into the empty half, while leaving the white behind (and letting any dribbly bits fall into the bowl as I transfer the yolk). Repeat until most of the white is in the bowl.

You can buy egg separators, which are like measuring spoons with a small hole in the bottom. You crack the egg into the spoon and the white runs out through the hole. But why shell out (no pun intended. Ok, maybe a little...) for that when you can do it in 5 seconds without it?

All you need is a small empty plastic water bottle. Break an egg on a plate, then squeeze the bottle lightly and bring it to touch the egg yolk. Let go, and watch the yolk slide into the bottle! Check out a video of this method in action.

The simplest way would be to put a small hole in the narrow edge of the egg (using small narrow object like tine of fork) and tilt the egg slowly. The white will come out of the small hole and yolk will remain in the shell.

Once the yolk is broken, it starts mixing with the white, so its almost impossible to separate them.

The method rumtscho describes works well with practice. But if you're lazy like me, consider picking up an egg separator tool - it catches the yolk and lets the whites fall through.

Crack the egg into a saucer, put an egg cup over the yoke, tilt the saucer and the white falls off. Whaddya mean you don't have an egg cup, you have eggs!

Place a slotted spoon over a cup or jar. Break the egg into the spoon and let the whites slip through the spoon's slots. The yolk will remain in the spoon.

I make egg white omelettes nearly every day. I have tried a number of ways to separate the eggs. Being sensitive to how easily the yolk can be pierced led me to this process. Here's the simplest way I've found yet:

A pair of suction-separators have recently hit the market that promise to make it easy to separate yolk from white. 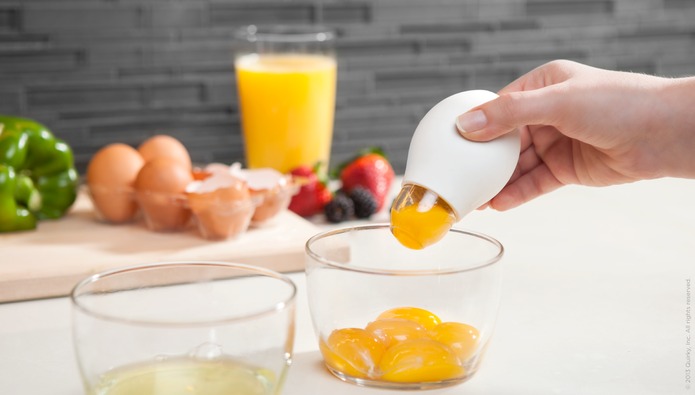 Separating eggs will never be the same.

Crack open the egg and gently dump the entire egg into a bowl - you don't want the yolk to break . Make certain your hands are freshly washed, and then just scoop your fingers around each yolk, and lift out. Hopefully you don't have long, jagged fingernails that would pierce the yolk and contaminate the whites. I use this method when I have to separate 2 or more eggs.

Not the answer you're looking for? Browse other questions tagged egg-whites eggs or ask your own question.

20
What causes the green ring between yolk and white when hardboiling an egg?
21
How do I make a fried egg with completely cooked white but completely runny yolk?
7
Why do my egg whites separate after whipping?
1
Powder to prevent foam in egg white protein?
8
Why or why not beat an egg before adding?
5
Why and how does the egg white stick to its shell when cooked sous vide?
1
Sous vide egg white falling apart on cracking
1
How to properly boil egg white?
10
Cracked egg leaves egg white residue. Should I worry about the other eggs?
2
Is there any way to increase the shelf life of mixed egg