What are the differences between types of soy sauce?

I recently started using Tamari over whatever the standard US form of soy sauce is. The difference was something of a revelation. The depth and complexity of flavor is an order of magnitude more interesting than what I had been throwing around in the kitchen. Marinating some shrimp in it for 20 minutes was incredible. I'm wondering if there's more that I'm missing.

Wikipedia has a load of info on Soy Sauce varieties, but it doesn't really answer the question of what they taste like or if there are certain uses they lend themselves to.

I have 8+ types of vinegar in my kitchen. Is soy sauce a similar exploration? What are the common types of soy sauce? What is the difference in flavor profile? Is the usage different? Have I discovered a new kitchen addiction to drive my wife nuts?

This is a complex question, because there are several different ways to categorize soy sauces:

To muddy the waters further, add into the mix the fact that flavor is most deeply influenced by the proportion of soybeans to grains -- yet this crucial factor is not typically used directly as a categorization tool.

To focus my research, I tried to find a site that felt as though the writer was speaking directly to you: one that would encourage, and not overwhelm or confuse, as you decide whether to become a soy sauce affectionado. Specifically, I wanted a resource that clearly addressed FLAVOR PROFILE and USAGE. Surprisingly, a blogger named Barbara came to rest as my #1 recommendation: Tigers and Strawberries. I like the simplicity and clarity of her writing style, as well as her experiential platform (complete with honest explanation of her biases). The endless comments after her post provide additional insights that might be helpful, as well.

Of course, Harold McGee always provides wonderful more scientifically-based, yet still somehow understandable, explanations. He takes 5 full pages (496-500) in his book On Food and Cooking to discuss soy sauce in all its layered glory.

Let me share what I know about Japanese shoyu (Japanese soy sauces), from the viewpoint of someone who grew up in Hawaii (where we put it on everything) and is now living in Japan (where shoyu is on the same level as wines and whiskey)...

Beyond the 5 main types above, there are further variations that are brewed with konbu kelp and dried bonito, or mixed with ponzu vinegar. There are also reduced salt shoyu types, too.

And if you really want to take it up a notch, you can even try to blend some of the shoyu types to come up with your own variations.

Personally, I tend to be very conservative and use:

I think the wikipedia is pretty clear on the difference of the soy sauce, but I will give you little hints about Chinese and Japanese soy sauce. I am a Chinese.

I think you can categorize the soy sauce from the 2 countries by their eating habits.

Usually Chinese eats saltier cuisine, so their soy sauce is usually saltier, for example: frying, deep-frying, roast. The most common one is fresh soy sauce (生抽), which is saltier. And there are premium version for fresh soy sauce, for example, tóuchōu (simplified Chinese: 头抽; traditional Chinese: 頭抽) which claims to be richer in taste. Actually I think they are very similar in taste because the salty favour dominates your taste buds. Another kind of commonly used soy sauce is old soy sauce (老抽), which is less salty, sweeter in taste. Usually we use old soy sauce to give dark colour to cuisine so that it looks better. A Chinese old enough to cook will use these 2 kinds of soy sauce to combine the salty and sweet favour, of course, with the help of other things such as sugar.

As for Japanese soy sauce, I am not so sure about differences between all kinds of soy sauce. As far as I know, and from the Japanese cuisine I've eaten, the soy sauce they use is usually sweeter in taste. (of course not as sweet as candy) You can figure out the reason behind their sweeter soy sauce from their eating habits. Japan is surrounded by the sea which is a very good source of fish, shrimp and other seafood which is sweeter and fresher in taste than pork/beef. Japanese consume the most salmon in the world. In order to have a better taste of the seafood, some of their soy sauce may also contain fish and Kombu for sweeter and fresher taste. Yes, Japanese soy sauce is good with seafood.

By the way, tamari is a by-product of the fermentation of miso, which is an everyday cuisine for typical Japanese. The ingredient may vary in different manufacturers. You might want to check the label of your soy sauce for them. I think this conclude the rich in taste.

I've spent the last 5 years living in China. There is a huge variety of soy sauces available here. Each has it's own particular use. Some go well with fish or shrimp while others match up with dumplings. Since I don't read Chinese very well, I usually match up the pictures on the bottle with what I wont to cook.

For dumplings I use a delicate soy sauce with a light flavour. This I usually mix with a dark coloured rice vinegar and some crushed fresh garlic.

When doing fried rice, I use the Maggi brand sauce. It has a strong, rich flavour.

With Japanese food such as sushi and salmon I use a Japanese brand. As the above poster noted, Japanese soy sauce tends to be sweeter. These can also be nice with fried dumpings. For sashimi fish and sushi, I mix the soy sauce with a little wasabi - a very hot kind of horseradish from Japan.

Extra: Just went to the super market and grabbed a shot of the soy sauce isle which will give you a hint as to the variety available here. 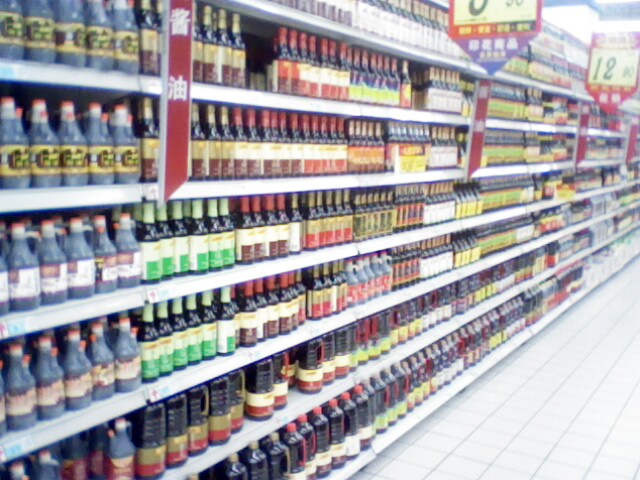 Not the answer you're looking for? Browse other questions tagged sauce asian-cuisine soy or ask your own question.

5
Soy sauce substitute
3
Soya sauce. Are they different for variety of dishes?
11
What's the difference between tamari and soy sauce?
7
What is "Less Sodium Soy Sauce"?
6
What soy sauce is Tamari closest to?
18
Does soy sauce expire?
0
How to know what light soy sauce had higher quality?
5
homemade fermented soy sauce safe raw?
2
If I want a complex, yeasty soy sauce, what to look for?