What is the hottest part of a chili/chilli/chile pepper?

I often hear different points of view to this question - some say the hottest part of the chili is its seeds, yet I've heard some (arguably more believable) sources claim that the white part that holds the seeds to the flesh is the hottest.

What part of the chili fruit is the hottest?

The Wikipedia article on Capsicum reads, citing a FAQ on a page of the ollege of Agriculture and Home Economics of the New Mexico State University:

Capsaicin is present in large quantities in the placental tissue (which holds the seeds), the internal membranes and, to a lesser extent, the other fleshy parts of the fruits of plants in the genus Capsicum. Contrary to popular belief, the seeds themselves do not produce any capsaicin, although the highest concentration of capsaicin can be found in the white pith around the seeds.

Cisneros-Pineda et al. measured via gas chromatography the content of capsaicin and dihydrocapsaicin in the pericarp, placenta, and seeds of seven cultivars of chili peppers and the results confirm this: 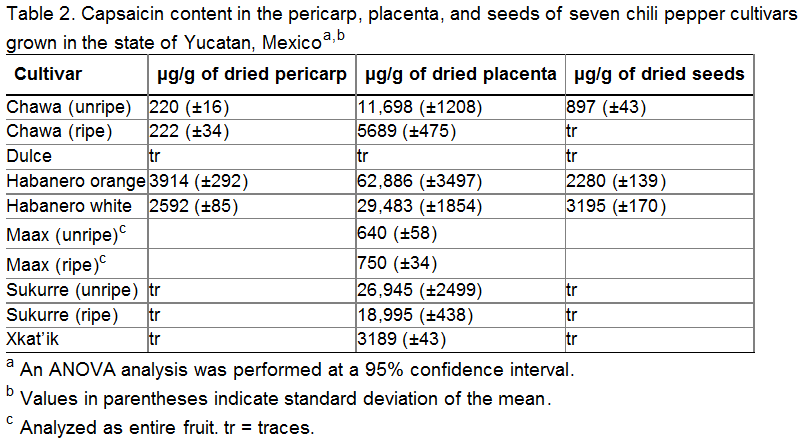 For dihydrocapsaicin, the difference is not so large, but the placenta still has a higher concentration.

In terms of concentration considering fresh mass the difference won't be as dramatic because while the seeds lose around half their mass by drying, the placenta will lose 90%.

Both the seeds & the membrane can pack heat. While I believe the experts who say "it is the membrane" my experience is that it is easier to control the heat by removing the seeds and the membrane and adding some seeds back in to get to your target "heat level" in any giving recipe.

Exactly, ribs and placenta contain the hottest part. That's the point for hotness. In regards to seeds, I do not recomend to add seeds to any hot cooked or raw sauce, because seeds are not good for our digestion, in any pepper, hard to process them. Just think, do you add seeds when cooking a red sweet bell pepper? I love hotness but I always take the seeds out of my salsas, for health. I do not understand why chefs add seeds... Are they just lazy or ignorants about our health issues?

Not the answer you're looking for? Browse other questions tagged chili-peppers heat or ask your own question.

49
How can you reduce the heat of a chili pepper?
6
Hot sauce; Remove seeds?
9
Can you freeze jalapenos?
6
Making Medium-hot Mexican Sauces
8
Does the choice of peppers affect the 'flavor of the heat'?
2
I have an insanely hot pepper: now what?
5
Making Pepper-Flavored Vodka
2
Only the seeds of the habaneros I bought are hot - low quality, or simply the nature of chili?