What is the most efficient way to remove kernels from a corn cob?

I have access to as much sweet corn as I want, so I would like to remove the kernels and store them in the freezer.

What is the most efficient (low time, high recovery) way to remove the kernels from the cob? I would prefer to get whole kernels if possible.

I have been using a paring knife, slicing down the sides of the cob onto a cutting board but I find that this slices through most of the kernels, leaving a good bit on the cob and allowing the liquid to escape.

What's wrong with letting the liquid escape? The liquid is good! When I freeze sweetcorn, I slice through just the outer part of the kernels, and then turn the knife sideways and scrape to release the rest of the delicious gooey liquid inside them... I'm not particularly fond of the flavor or texture of the cob-side anyway, and the creamy result can be packed and frozen with a minimal amount of air.

I highly recommend using a chef's knife instead of a paring knife though. A big cutting board and a bench scraper also come in handy. If you're doing a lot of corn at once, a baking sheet works well to catch the juice.

Growing up, we'd get a bunch of people together and do bushels of the stuff in an afternoon - cooking, icing, cutting, scraping, and packing simultaneously. With a bit of practice, you become quite fast at it.

But, if you're simply looking for a quick way to process the ears alone, there are specialized tools made for this job: search for corn creamer or corn cutter.

You could probably use a mandoline as well, provided you're able to adjust the depth of the blade. Frankly though, this seems cumbersome. Practice with the knife...

I have read that if you get a bundt pan (see image below) and stick the cob in the middle hole, and then cut the kernels off as you have been, the pan then catches them quite easily. how to get them off the cob without slicing, though, I really do not know. 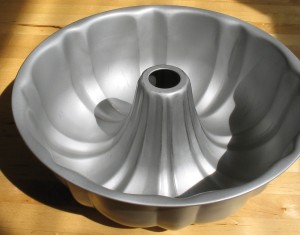 Not the answer you're looking for? Browse other questions tagged storage-method corn or ask your own question.

13
How do you cook corn on the cob on BBQ?
7
What are the modern or recommended ways of cooking corn on the cob?
3
Do you have to refrigerate leftover grilled corn-on-the-cob?
6
How to make corn nuts from fresh corn on the cob
2
Par-Cooking Corn on the Cob in a Microwave
3
How to find/substitute dry corn with shell removed for stews?
7
What are the parts of the corn plant?
3
Are any corn products in the United States made from nixtamalized corn?