Why do you put celery in a bloody mary?

Why do you put celery in a bloody mary? Is there a chemical reason for this or is it done just for garnish?

It's meant to be munched on between sips, and permits a "reset" - the cocktail will be fresh upon the tongue the sip after the bite, permitting you to enjoy its flavor and consistency without being oppressed by the cumulative effect of unctuous, spice and salt that is the hallmark of the beverage.

Celery is an astringent and an aromatic - it will cut through the palate-coating tomato juice can leave behind, cool the intensity of the salt and heat, and will interrupt the soup-like consistency with a firm crunch. It's often included in tuna and chicken salad and served with hot wings for the same reason. Other vegetables that tickle our sense of "bitter" in a pleasing way may be similarly substituted - but celery also acts as a handy swizzle stick.

There is no chemical reaction that happens. It is mainly a garnish. You might get a tiny bit of celery flavor in the drink from the celery, but I think this is negligible given the other strong flavors in a bloody mary. If you want a celery flavor, add celery salt.

the celery help cleans the taste in your mouth ..helping every sip of your ceaser taste delicious

I've always seen it done as a garnish, and only a few places anymore will keep fresh celery around just for one drink, so it's becoming that much rarer.

To be fair, there are a lot of ways to make a Bloody Mary. A good barman will ask their patron how they like theirs. The two requisites that make it a Bloody Mary are the vodka and the tomato juice, and then a source of salt and sour are typically also considered must-haves, but exactly how you get those in the drink are up to you. Beyond that, any and all of the following are commonly added or omitted based on drinker's preference:

That's just what goes in the drink. I have seen or heard of all of the following being used as garnish, most of them skewered:

... and of course, someone just had to put them all in one drink: 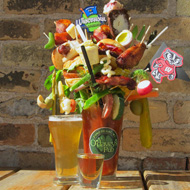 The celery stick garnish became a staple of the Bloody Mary only after an impatient patron at Chicago’s Pump Room couldn’t wait for his server to bring him a swizzle stick. He took matters into his own hands and snatched a celery stalk from a nearby relish tray.

9
Bubble Tea - Instant or Traditional Pearls
9
How can this "Bloody Brain" cocktail be made without alcohol?
2
Are there thermo bottles to store tea, as soon as it is made (100ºC/212ºF)?
6
Vermouth for use in Drinks - can I freeze it?
6
Whiskey and Water
7
What's really happening when reusing tea leaves?
3
Why does a (vodka) martini often come with an olive on a stick?
1
Can I make shelf stable cocktail mixers by pressure canning?
9
How to get a good fragrance from burnt rosemary?