In Spain I had a wonderful tapa called Pimiento de Padron. Green chiles fried in olive oil and salted. What type of chile could I find in the US to replicate this dish? The chiles should be mild, with the odd spicy one.

Not sure if there is a good substitute you can buy already grown?

If you live near a warm coast try growing your own. Good seed suppliers (Johnnyseeds, LocalHarvest etc - Peperone Padron in NZ from italianseedspronto) should be able to help, or check Ebay or Amazon 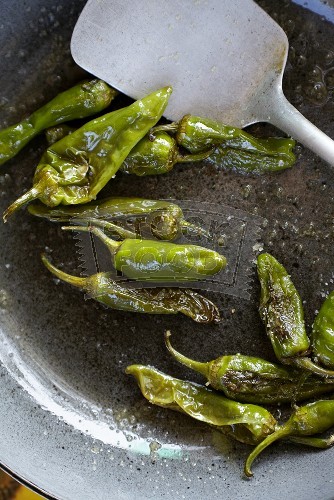 I haven't seen these on sale , and doubt if anything else has the shock effectof the odd hot one. However, I've grown these from seed this year in an unheated greenhouse, and had good yields. I plant 3 to a 7ins pot and stake, water and fertilise them like tomatoes. Haven't tried them yet, but they certainly look good!

When I've had the dish (and yes, it was in Galicia; Santiago de Compostela, to be exact), I'd say they all had heat to them, just a few had some natural variations that you always get with peppers. (eg, some jalapeños are hotter than others).

It's also likely affected that the peppers are picked for size, not ripeness, so it's possible that the riper (hotter) peppers are mixed in with the others ... and to get 'em picked early, you're either going to need your own plants, as TFD and Stuart have mentioned, or make friends with your local farmer. If you're growing more than one variety of peppers you might try planting most in with mild peppers, and one surrounded by lots of hot peppers to see if you can improve the variability of the heat.

If growing your own (or convincing a local farmer) aren't options, I'd go with a low-heat smaller pepper ... Pepperoncini might work, but it it's 100-500 scoville, so it doesn't have the extreme range of the Padrón. If you could find hungarian wax & banana peppers that are of a similar size and shade, you might go with a mix of the two, but they're not going to be of the one-bite size like the Padrón.

Not the answer you're looking for? Browse other questions tagged substitutions chili-peppers spanish-cuisine or ask your own question.

8
Chili powder substitutions
2
How do I scale serrano chile?
4
How to prepare Spanish Migas?
5
homemade chilli oil
3
Identify this unusual spicy appetizer
1
Au poivre without green pepper, is it good?
2
Hot peppers in soup don't stay spicy
2
What are these small salty peppers from The Cheesecake Factory?
1
How do you make a deep spicy flavour that leaves you wanting more?
2
What type of chili in Olive Garden ‘Calabrian Chicken’