Why does my German nut strudel fall apart?

I have a recipe for nut strudel, which calls for the following:

I have made it twice, and both times the crust is all crumbly and does not roll well. Tastes great but looks like a mess.

Why wouldn't it hold together, and what can I do to fix it?

This is not a Strudel recipe. Аs BaffledCook showed with his recipe, a Strudel is made with a phyllo dough (flour and water, usually no egg at all). The dough is then rolled out until it is paper-thin, and the filling is rolled into it. The dough gets a bit hard and flaky after baking, especially if the filling is somewhat dry, but it doesn't fall apart.

The recipe you have is not for a phyllo dough, but for a cheese-oil-dough (German: Quark-Öl-Teig). As you mention nuts, I suspect that the whole dessert is in fact a Nusszopf, one of the more common use cases for a Quark-Öl-Teig. I can see how the butter led the other people here talk about flaking pastry, but in fact this type of dough isn't supposed to be a flaky pastry, and it is normally made with a neutral vegetable oil, not with butter. If it falls apart, this means that you used too much fat and not enough water, which is probably due to both the ratio and the substitutions.

First, there is the problem of cream cheese. It is not exactly the same thing as quark, and it has a very high fat percentage, I think about 75% of the dry matter. Quark is available in three fat types, with 10%, 20% or 40% fat of the dry matter. So the first thing I'd do is to use another substitution. If you have a Russian market around you, ask for tvorog. Else try ricotta (if there is some whey in the package, don't throw it away, use it in the dough). Both are drier than quark, so maybe you can add some milk to them (my gut feeling says 20:80 milk:cheese). If you want to stay with cream cheese, you probably can do it, but you'll have to calculate how much additional fat you have and then reduce the amount of oil you use.

The second point is the fat. Your recipe says butter, but you'll improve the plasticity of your dough with a liquid oil. Use a neutral-tasting vegetable oil.

Third, I have no idea how much a stick of butter is, but as you have all the symptoms of too much fat, your recipe probably has too much. The ratio of good quark-öl-teig is 4 parts flour, 2 parts quark, 1 part oil (measured by weight!). It also incorporates some liquid (milk or egg or water, just 1-2 tbsp) and backpulver. If you don't want to go fancy, you just roll it out at maybe 1.5 cm thickness, cover with the nuts mass, roll, and bake. There are advanced braiding techniques too, but they don't affect the taste much.

The texture of the baked Nusszopf is similar to some cakes, but somewhat harder and crispier. Here a picture of what it looks like (the dark parts are the nut mass): 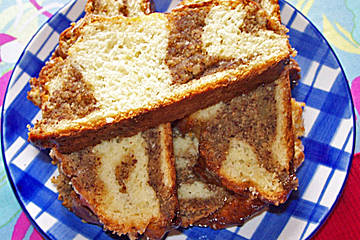 As commented above, your formula lacks 'water'. A German recipe calls for:

The recipe uses the oil to coat the dough while resting, and the egg to brown the dough in the oven.

The butter is used in the filling to coat the dough from the inside (you put the rest of the ingredients on top).

Edit As Cos indicated, maybe the technique you are using is off. If you work the butter-flour fast and cold, the pastry will be flaky. That is because the flour coats the butter fragments, but the butter doesn't melt.

Not the answer you're looking for? Browse other questions tagged baking dough crust or ask your own question.

16
What is seeping out of my key lime pie?
5
Cookie Biscuits: What happened?
6
Why is my quiche soggy?
7
Why does my walnut cake fall?
1
Why does my dough never "fall" after its first rise?
7
Why does my dough always need more water than the recipe calls for?
3
Soft dinner rolls always taste bland or flat
2
How to bake the Betty Crocker Super Moist White Cake
2
Tapioca pizza crust is undercooked?
4
How to ensure that the bottom of blind baked pie crusts brown properly?