Are there more omega-3 fatty acids in fresh than smoked mackerel?

Is there something in process of smoking that would cause the mackerel to lose some of the fatty acids?

In other words, does the quality or amount of the omega-3 fatty acids (or other 'healthy' oils) in fish decrease over time? Is fresh fish have more or better omega-3 / polyunsaturated fats?

Theory is a good thing, but data is always better. Especially when somebody else does the whole work of gathering and evaluating it. Luckily, there is somebody who does it for food. Following data comes from the USDA. It is very verbose, so I had to cut off most of the screenshots. I left all the lipids in the first one just to show how much they measured, and only used the data for Omega 3 in the other ones.

The first data set is raw Atlantic mackarel. I picked Atlantic just because it was first in the list, they have several kinds. 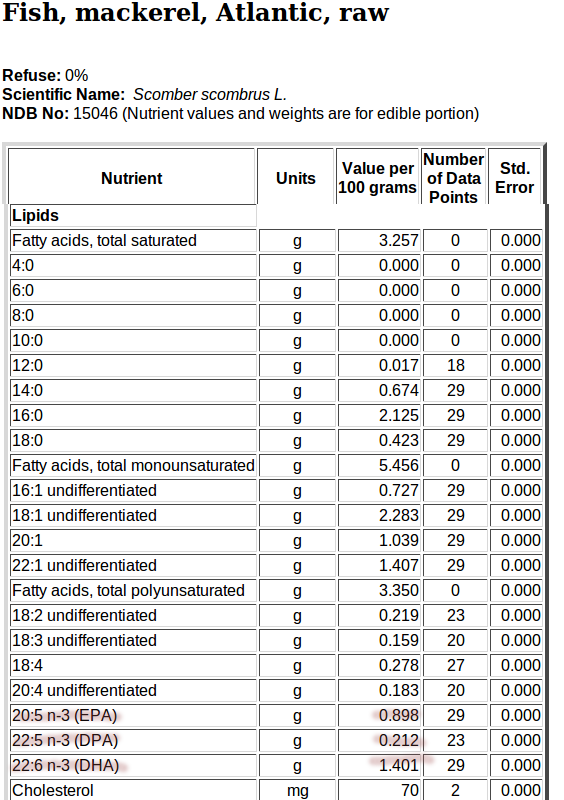 Sadly, they didn't have data for smoked mackerel. But as Frankie points out, you can do a hot smoking process and a cold smoking process. I think that the cooking in both is very well approximated by cooking on dry heat, resp. salting. Of course, it is possible that the smoke itself destroys more fatty acids than just applying heat or brine, but these numbers give us an upper limit for the amount of omega 3 left after smoking. 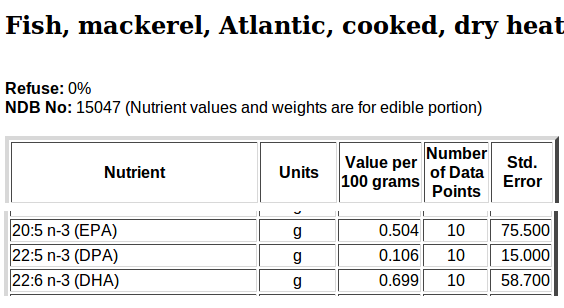 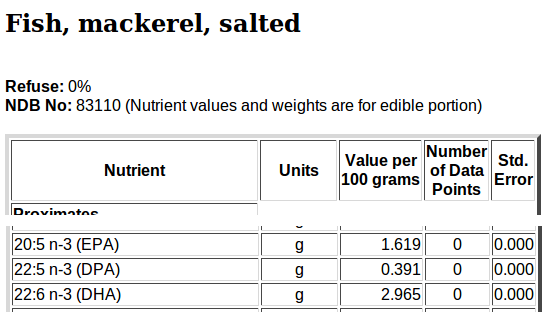 Now we can start making conclusions.

First conclusion: there is something fishy about the data.

Zero standard deviation for all the values in the raw fish? Zero data points for the salted fish?! I can only assume that they just wrote a zero where the actual information is missing from the record. Still, I think we can trust the data (because the USDA has no interest to lie and because we don't have a better data set).

Before we start making further conclusions, we should remember that these are values per 100 gram of end product. 100 g of salted mackerel isn't made with 100 g of raw mackerel! Luckily, the source also gives the water percentage of the samples (not shown on the screenshots), which is 43% for salted mackerel, 53% for cooked mackerel and 63% for raw mackerel. So, we should in fact compare the numbers per 100 g of dry matter (we assume that the cooking process neither adds nor subtracts dry matter - not exactly true for salting, but we can assume that the difference is small). The numbers are: 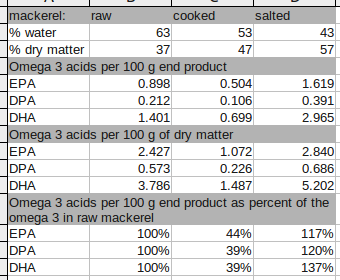 Second conclusion: Heat (so presumably also hot smoking) destroys around 40% of the fatty acids in mackerel

This is straightforward, comes from the numbers in the table.

Third conclusion: The salted mackerel didn't come from the Atlantic

Unless I have made a big mistake in my reasoning about the comparison based on dry matter, a salted fish has more omega 3 than a raw fish of the same size. The difference in data is small enough to have been caused by the choice of a different kind of fish (note that the standard deviation within a sample of the same kind of fish is 10 to 15%).

While the data comparison here has some problems (the assumed different kinds of fish, the fact that salting isn't the same as smoking), I think we can see the trend here. If the salted fish had lost too much of its omega 3 in the salting process, then it wouldn't have such high omega 3 values after the salting. We can assume that a cold smoked fish is also salted (my personal experience and Frankie's answer support that), so any possible preserving effect of salt should be present in cold smoking too. There is a risk that the smoke itself could destroy the fatty acids, but I doubt it. After all, the smoke doesn't penetrate the tissues very deep, so there shouldn't be much contact.

Of course, I am not 100% sure about the conclusions above, but I think it is reasonable to assume that they are true. I have tried to make clear any possible problems. So the short answer is: fresh mackerel and cold smoked mackerel have about the same amount of omega 3 fatty acids, but hot smoked mackerel has much less omega 3 than the original.

There are two (that I know of) ways to smoke food; cold smoke and hot smoke.

Part of each method is the brining of the food prior to smoking it (have seen aboriginal tribes use smoke only without brining to keep insects off the food while drying).

Cold smoke is called that because never during the smoking process is the temperature allowed to rise to the point where the fat in the meat liquefies. Apparently the liquefication of the fat increases the liklihood of bacterial invasion. Examples of this type of smoking are: Bacon; virginia ham, which in some instances are hung for years before being eaten; and indian jerky [sic], which is dried, smoked salmon, which can hold for months in a cool, dry place.

Hot smoke is a different process in that the meat is cooked, usually at a lower temperature than it would be if not being smoked, and smoked at the same time.

Am not a food chemist, so am not sure of the chemical reactions produced by the smoke.

It does seem sensible that heat is a greater catalyst for the breaking down of omega 3 stuff than smoke.

If the above postulate is correct, the generally lower heat used to hot smoke mackerel would seem to indicate that the smoked product would have more omega 3s.

Of course, how long it has been on the shelf would be another consideration, as our air is a source of oxidation, which probably breaks down the fatty acids.

Not the answer you're looking for? Browse other questions tagged fish or ask your own question.

12
How do I choose frozen fish so that it doesn't release so much water?
2
Can we (safely?) use salmon after storing it (in deep freeze?) for two years or more?
3
What fish can be used for 'minced fish' in Chinese cooking?
1
How much Omega-6 does sprat have?
3
Why is freshness more important for fish than beef?
12
UV lamp to disinfect raw sushi fish slices
4
Good Frozen Fish /seafood
1
What causes some fish to get texture like mashed potato suddenly?
3
Time and temperature required to kill parasites in fish?