I happened across the wikipedia article on barley water today, and it features a photo of some very dark barley water: 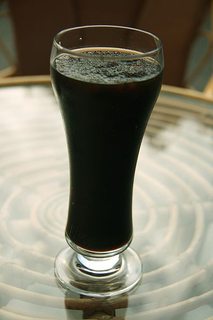 As far as I know, barley water is normally much lighter than that. Where does the dark color come from? Is that perhaps not just barley water?

It is unlikely that pure barley, however strong the malting, will produce such a dark color. I think it is safe to assume that it is colored.

In Germany, this (or a very similar) beverage is called Malzbier (See the English Wikipedia article on Malzbier) It is an alcohol free drink made with malted barley, and commonly colored with the food coloring E 150 (Look at the site of this popular drink, third FAQ item from the end). This is a coloring created by letting different types of sugar undergo a Maillard reaction, and can be considered a type of caramel. So it can be used in a malt drink in relatively high amounts without introducing an unusual taste or presenting a health risk.

If you have seen lighter barley water until now, this is probably because different producers use different amounts of coloring. It is probably a regional thing, the drink in the picture is produced in Spain, maybe they like their malted drinks darker.

It could be that the producer uses toasted or roasted barley as part of their process, which would impart the darker colors that you would normally see in various styles of beer. That would also give it different flavors. Toasted malts could provide nutty, toffee, caramel, or raisin flavors. Roasted malts would give it more coffee or chocolate flavors.

5
How do you properly soak and cook barley?
2
Barley vs. oats?
4
Should I delay adding barley when making vegetable barley soup?
5
How to get good barley texture
2
How to make Barley bread?
0
Substituting barley for pasta
4
How long should pearl barley be boiled for?
7
Is barley the same as bulgur?
1
Too much barley in vegetable soup