How do I deal with silverskin in a steak without trimming away all the fat?

Below is an image of a steak I cooked the other night. It is a grass-fed New York Strip steak, I used medium-high heat in a cast-iron pan, seasoned with only salt and pepper and cooked for 3 minutes per side. The steak was roughly 1.5" thick, and it is cooked to roughly medium. (The image looks redder in the center than it was in actuality, but it's close.)

The fat was soft and delicious, as was the steak. But that streak of silverskin that attaches the two was impossible to chew. I have heard that when you're butchering other animals or large cuts of meat, the silverskin is always removed, but if I had done that there would be no fat left on my steak. 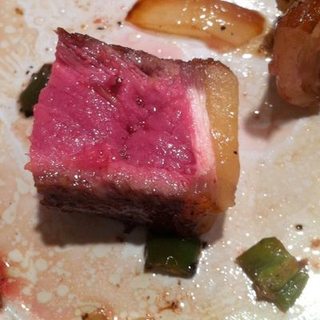 How do I deal with this silverskin without losing all the fat?

A good Sirloin (New York Strip steak) has a reasonable marble of fat, so you should not have to worry about edge fat

If you like your fat, pull/trim the silverskin and fat off and render the fat in a medium hot pan BEFORE putting the steak in. When enough fat has melted for your taste, cook the steak in the fat at the temperature and time you like

Add fresh herbs or garlic to the rendering fat for extra zing!

This is probably ludicrously over the top but you could always cut off the fat and remove the silverskin and then use transglutaminase to glue the fat back onto the meat. There's an excellent post on Cooking Issues with some great information here:

Dealing with the silver skin can be quite a challenge, but (as he often does) Alton Brown breaks it down in a way that even I could master with just a few tries.... of course the problem is remember which episode he did it on. The best video tutorial I have seen for trimming silver skin was "Good Eats: Tender is the Pork" available directly on "You Tube" (linked to the first of three parts.) While AB demonstrates on a pork tenderloin the technique is fully transferable to beef (or even lamb). You should also enjoy his "Tender is Loin" episodes, but that's another story...

Obviously it's impossible to remove the silverskin without also removing the fat. You should be cooking the steak on a screaming hot pan, but even that won't 'melt' it.

I'd suggest removing the silverskin and fat, then adding a large knob of butter to the pan near the end of cooking, basting over the steak liberally to add richness.

Ideally, you want the flavor of the fat, without having to eat a blob of fat or the silverskin.

Cooking your steak standing on its fat side to start off with. It will render some of the fat out and help flavor your pan that you're cooking it in. After that, cook the steak as normal and frankly...just don't eat the rest of the fat or the silver skin. You've already melted a good chunk of it into the steak, so just enjoy the meat of the steak flavored with that wonderful fat.

Cut off slice of steak with fat and silver skin. Chew. Allow flavour to anoint your palate. Swallow the goodness. Spit out tough items as the sliver skin. Problem solved...we are carnivores are we not?

you could cook the steak longer: notice how you've transformed the exterior 2mm of connective tissue on both sides into more edible gelatinous stuff.

another reasonable way to do this is cook the ny strip as a roast (to 100° or 105° by your photo). The hotter temperature to the exterior would transform the connective tissue completely, and leave the fat a little crispy but still there.

if you insist on a steak, a cool temp covered barbecue would do the same trick.

lastly: you could choose a different cut (hello, prime rib) which has fat that's not partitioned by silverskin.

This is just the nature of the strip loin. If you prefer fatty goodness without this tough stuff along the edge, you would be much happier with a ribeye.

Not the answer you're looking for? Browse other questions tagged steak or ask your own question.

25
How do you cook grass-fed beef so it is not tough?
4
How to deal with flare up when broiling a steak?
13
Cooking steak on the grill
5
When cooking steak should the fat inside be cooked?
1
Ate steak with the layer of fat kind of undercooked, is it dangerous?
5
Why did my steak marinade not make a difference?
1
Why isn't my steak fat cooking?
11
How to fix grass finished beef that tastes like fish?
4
How do I cook a steak well-done without it drying out?
12
Cooking a nice pan seared steak for picky eaters